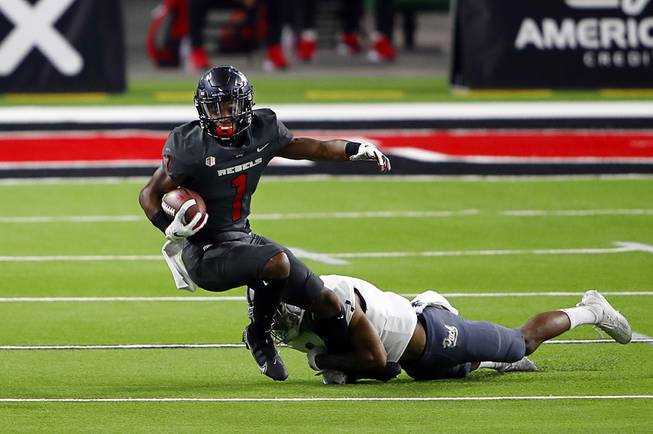 Playing its first game on the turf at Allegiant Stadium was a big moment for the UNLV football program, but first-year head coach Marcus Arroyo is more interested in the action that is taking place on the practice field.

UNLV has underwhelmed in its first two contests this season, falling to San Diego State and UNR by a combined score of 71-25, and Arroyo believes his team has to get better in practice before there’s even a chance of seeing better results on game day.

Of course, that sentiment is echoed by every coach in every sport at every level. The key is getting the players to buy in to a “practice makes perfect” mentality.

In his meeting with the media on Tuesday, Arroyo expressed confidence in the progress being made.

“I think we showed improvement and growth from Week 1 to Week 2, which was a big goal. That’s what we wanted to see,” Arroyo said. “We had improved practices last week … Something that’s most important to me is the way we practice. You’re not going to have a byproduct show up unless you have the build-up to it, and I think they’re learning to practice every day. We’re still continually teaching that.”

Improvement was most tangible on the offensive side of the ball in Week 2, as UNLV gained 348 yards of total offense and picked up 22 first downs (big numbers compared to 186 yards and 11 first downs in Week 1).

Arroyo said quarterback Max Gilliam has done a commendable job of picking up the offense and estimated that he has installed about 65 percent of his playbook to this point.

Health has also allowed UNLV to hold higher intensity practices over the past week, which is something Arroyo wants his players to get used to.

“It’s good to have a couple guys back to boost our very thin roster,” Arroyo said. “Now we’ve got to stay healthier and hopefully keep advancing so we can have our type of practice and our type of regimen, which is demanding.”

Though some of the team’s more heralded freshmen have not made big impacts yet, Arroyo wants to see them get up to speed on the practice field before he feels comfortable using them in game situations — even if Mountain West games in 2020 are proving to be little more than exhibitions.

“I hope there’s an opportunity as we move forward that we get an opportunity to see those guys live,” Arroyo said of his youngsters, “because this is the best spring ball you could ever evaluate. It’s full-tilt, so it’s awesome.”

The absence of some high-profile UNLV players during the first two games was something of a mystery, as Arroyo chose not to reveal the roster status of players such as Randal Grimes, the team’s leader in touchdown catches last year. But on Tuesday the coach confirmed that Grimes has been suspended for the year due to a violation of team and school rules.

Arroyo did not elaborate on the suspension.

“He is suspended for the calendar year,” he said. “The terms of that remain in house.”

Arroyo also confirmed that senior receiver Mekhi Stevenson, senior safety Drew Tejchman, senior safety Greg Francis and junior fullback Jamaal Neal have opted out of the season due to COVID-19 concerns. As per NCAA rules, those players will not lose a year of eligibility and can return to the team next year, if they so choose.

During training camp Arroyo said he was holding a four-way battle for the starting quarterback job. In Week 1, he rotated three QBs in against San Diego State. Now, the quarterback competition appears to be down to two contestants.

While Max Gilliam started again against UNR and took every snap, Arroyo said sophomore Justin Rogers is still competing with Gilliam in practice.

Sophomore Kenyon Oblad, who ended last year as the team’s starter, seems to be the odd man out after Arroyo did not mention him when talking about the ongoing quarterback competition.

“I think between [Gilliam] and Justin they’ve both done an awesome job these last two weeks,” Arroyo said. “Those two guys have put themselves in position to really keep elevating the process at [the quarterback] position.”