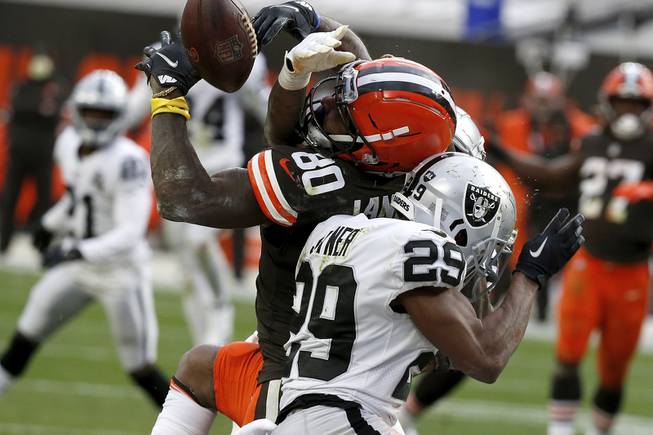 Raiders coach Jon Gruden and his staff harped on forcing turnovers in every practice going into last week’s game at Cleveland. Linebacker Nick Kwiatkoski took their pleas for takeaways to heart.

The defensive captain began focusing on his “swipe” technique to force fumbles and was able to put it to use on the Browns’ first offensive possession. Kwiatkoski lunged at tight end Harrison Bryant from behind and ultimately dislodged the football, which teammate Nicholas Morrow jumped on for the Raider defense’s first fumble recovery of the year.

“Turnover battles win games,” Kwiatkoski said after the victory. “For us to get a turnover early in the game is huge, giving our offense an opportunity.”

That was just one of many defensive techniques and wrinkles Las Vegas emphasized during the week before putting into action en route to a 16-6 victory. Gruden said the staff worked tirelessly on making such changes, and on the surface, the diligence paid off in a big way.

The six points scored by the Browns were the fewest the Raiders have given up in three years since the start of Gruden’s second tenure with the franchise. Las Vegas also limited Cleveland to 4.7 yards per play, more than a yard below what it’s given up to any other opponent this year.

All the numbers indicate the Raiders just might have figured something out. There were of course extenuating circumstances, though.

The Browns were playing without a couple stars on offense, guard Wyatt Teller and wide receiver Odell Beckham Jr., and more important, the harsh weather conditions stifled offense on both sides.

In other words, the Raiders are going to need to show progress outside of a wind-rain-and-snow game in order for anyone to really take the improvement seriously. They’ll have quite the opportunity Sunday when they travel to Los Angeles to take on the Chargers in their second AFC West divisional showdown of the year.

“We only had 23 minutes of possession on defense (against the Browns),” Gruden said. “That was a big help. We’re tweaking it. We’re trying to put our players in the best position to succeed and also try to attack the opponent. It’ll never be the same every week.”

The tinkering will continue against Los Angeles, and there’s reason for optimism if the moves prove to be as shrewd as they were against Cleveland. Bad weather or not, some of Gruden and defensive coordinator Paul Guenther’s changes paid dividends.

They switched up personnel groupings up front, and though the maneuver still didn’t result in much of a pass rush, it presumably was part of the reason Las Vegas held Cleveland to 4.6 yards per rush attempt. They also got creative in the back end, which led to more direct results.

Usual nickleback Lamarcus Joyner was playing safety when he broke up a late pass intended for Jarvis Landry that may have otherwise gone for a touchdown. Joyner has long graded out and performed better as a safety, where he excelled in college at Florida State and early in his NFL career with the Rams, but the Raiders had been reluctant to use him there.

Their newfound flexibility sure looks advantageous.

“We moved a few of our players around,” Gruden said. “We asked them to do a couple different things and they did it well.”

There’s no guarantee similar switches will work against the Chargers, which will present a new challenge entirely. Despite their 2-5 record and penchant for collapses, the Chargers have one of the best offenses the Raiders have seen all season.

Rookie quarterback Justin Herbert’s 8 yards per pass attempt is the highest figure for an opposing Raiders’ passer aside from reigning Super Bowl MVP Patrick Mahomes. It might take more than Joyner lining up a little further back to slow the Rookie of the Year frontrunner.

“We’ve got to present some different looks,” Gruden said when asked about Herbert. “He’s further along than most rookies. He’s been well schooled, and they’ve got a lot of great receivers. Keenan Allen and Mike Williams are making big plays … This young man is a problem for everybody in the AFC. He’s off to a great start.”

The Raiders’ defense may not have gotten off to a great start, but they’re hopeful it’s now headed in the right direction. It may have sounded revolutionary when Gruden promised sweeping changes last week, but going forward, it just might be part of the Raiders’ weekly process.

“Building each week in practice, emphasizing different things, turnovers or the run game each week,” Kwiatkoski said. “Just putting those emphases week by week and building on the good things.”