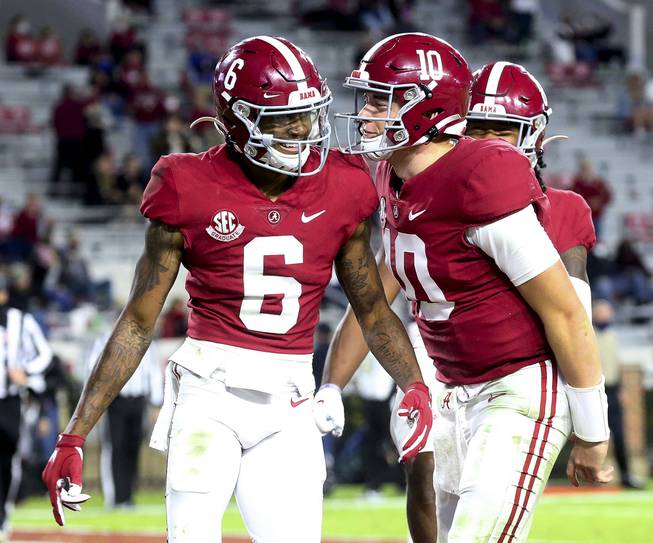 Alabama wide receiver DeVonta Smith (6) and quarterback Mac Jones (10) celebrate a touchdown pass during the second half of an NCAA college football game against Mississippi State on Saturday, Oct. 31, 2020, in Tuscaloosa, Ala.

This year’s college football season is unprecedented, and not only for its shortened and mostly crowd-less nature. It might also be the most top-heavy championship picture since the 1998 advent of the Bowl Championship Series (which evolved into the current College Football Playoff), with three teams looming large compared with the other 127 Football Bowl Subdivision programs. This year, it’s Alabama, Clemson, Ohio State … and then everybody else.

Depending on the sportsbook, future betting odds have those three teams between a combined 80% and 90% probability to win the title. As the nation’s final teams get into action—with the Pac-12 starting play on November 7—here’s a look at each of those big three contenders, along with places to find value in the futures market at the Westgate Las Vegas SuperBook.

• Heisman candidate: QB Mac Jones (+150). Many expected the Crimson Tide to regress following the loss of record-setting quarterback Tua Tagovailoa, but there’s a strong argument to be made that Jones is now heading the best offense in school history. Jones leads college football with 12.4 yards per passing attempt, despite having played one of the nation’s stronger schedules so far.

• Toughest remaining game: vs. Auburn, November 28. The line on this game coming into the season was Alabama -13.5, but with Auburn having underwhelmed despite a 4-2 record, it’s now trending closer to three touchdowns. The Crimson Tide will still need to be careful in a rivalry game that has produced some wonky results over the years, but it’s difficult to imagine the Tigers’ offense keeping up.

• Why they’ll win it all: It’s Alabama. The Crimson Tide get the best players every year and have future NFL stars at every position, especially on offense, where wide receiver DeVonta Smith and running back Najee Harris join Jones to create an unstoppable triumvirate at the skill positions. No matter who it plays, barring an injury to Jones, Alabama will be favored in every game going forward.

• Why they won’t: The defense might be the worst of coach Nick Saban’s 14-year tenure. Alabama is young on that side of the ball, and the pandemic might have prevented it from getting up to speed. The Crimson Tide are currently 71st in the nation in allowing 5.3 yards per play, a far cry from their usual spot near the top of the list.

• Heisman candidate: QB Trevor Lawrence (+200). The Clemson QB was the favorite until he tested positive for coronavirus and missed Clemson’s 34-28 victory over Boston College. The junior, who’s considered one of the top NFL prospects of the past several years, released a statement saying his symptoms were mild, but he also won’t be eligible for a November 7 game against Notre Dame.

• Toughest remaining game: At Notre Dame, November 7. Without Lawrence, this will be awfully tricky. Clemson is only a 5.5-point favorite, as Notre Dame has smothered opponents with a suffocating defense. Freshman quarterback D.J. Uiagalelei is a blue-chip recruit who played well in his debut, but going on the road against a team as strong as Notre Dame is a bigger challenge.

• Why they’ll win it all:Lawrence has already proven he can beat both Alabama and Ohio State. When he was a true freshman, Lawrence led Clemson to a 44-16 blowout win over Alabama in the national championship. Then, last year, Clemson rallied to beat Ohio State 29-23 in the semifinals with a lot of the same supporting cast it has this season.

• Why they won’t: The Tigers have looked more human than the Crimson Tide and Buckeyes when they weren’t playing The Citadel or Georgia Tech. Even with Lawrence behind center, they had relatively close games with Virginia (41-23) and Syracuse (47-21), which is somewhat alarming.

• Heisman candidate:QB Justin Fields (+150). A more explosive runner than Lawrence and certainly Jones, Fields brings the dual-threat style that voters have favored in recent years. That might make him the most joyful player in the nation to watch. So far, in a three-year college career, he has scored 66 total touchdowns—51 passing, 15 rushing—and thrown only three interceptions.

• Toughest remaining game: vs. Michigan, December 12. In other words, there isn’t a toughest remaining game. Ohio State defeated Penn State 38-25 as 10.5-point favorites in its second contest to get past the hardest part of its schedule. The Buckeyes were an 11.5-point favorite against Michigan in game of the year lines coming into the season, but with the latter having already suffered an upset loss to Michigan State, it would now be several points higher.

• Why they’ll win it all: The Buckeyes have the clearest path. The only Big Ten team with a real chance to challenge them, Wisconsin, would only await in the conference championship game and currently isn’t playing due to a coronavirus outbreak. Ohio State is also the nation’s No. 1 team by several sets of advanced metrics, including Bill Connelly’s SP+ ratings.

• Why they won’t: Coaching inexperience. That’s no knock on second-year man Ryan Day; he can outwit almost anyone in the nation. But Alabama’s Nick Saban and Clemson’s Dabo Swinney have proven to be on another level. There’s an inherent advantage to having a multiple-time national championship coach on the sidelines that Ohio State can’t match.

Oklahoma (80-to-1) has slid into the No. 4 playoff spot in each of the past two years and is again favored to win the Big 12. But having already suffered two losses, the Sooners might be all but eliminated. Odds-wise, Notre Dame (25-to-1) is the next choice, but that would require beating Clemson twice—once in the regular season and again in the ACC Championship Game. The winner between the annual rivalry game between Georgia (30-to-1) and Florida (40-to-1) on November 7 will still be alive despite one loss, especially if no team goes undefeated in the Pac-12. There’s debate over who should be favored in the Pac-12 between Oregon (60-to-1), USC (80-to-1), Utah (100-to-1) and Washington (500-to-1). And if a non-Power Five conference team was ever to make the playoff, it would probably be this year. Both Cincinnati (50-to-1) and BYU (80-to-1) are steamrolling opponents to give themselves an argument.

Alabama is the best team in the nation and should stand alone as the favorite to win its 18th title—and sixth under Saban—but there’s neither value nor fun in such a short price. For a gamble, consider Florida at 40-to-1 (though it is a 4.5-point underdog to Georgia on November 7); the Gators have shown they have the offense to compete with anyone and should get better defensively. And if you want to get crazy, try Washington at 500-to-1. The Huskies at least have a great chance to win the Pac-12 and get into the playoff field.