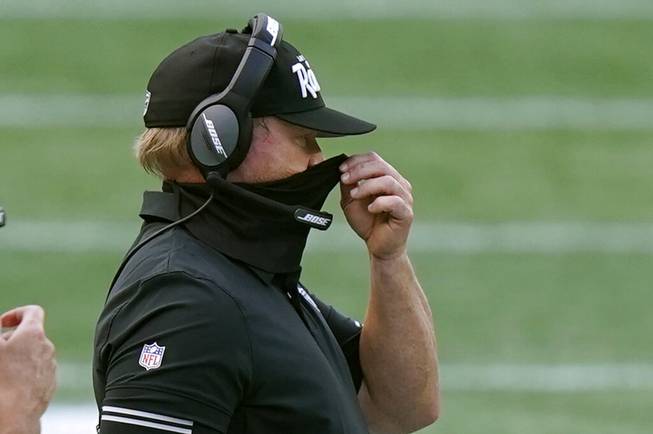 Las Vegas Raiders head coach Jon Gruden adjusts his protective mask along the sideline in the second half of an NFL football game against the New England Patriots, Sunday, Sept. 27, 2020, in Foxborough, Mass.

The Raiders have continually skirted the NFL’s health and safety protocols regarding COVID-19, and according to reports the league is about to levy another round of punishments against the franchise, including the loss of a draft pick.

The team’s most recent violation involved veteran tackle Trent Brown, who tested positive for the coronavirus two weeks ago and was then reportedly found to have not been wearing his league-mandated tracking device around the Raiders’ facilities. For that transgression, the NFL will fine the team $500,000, fine head coach Jon Gruden $150,000 and dock the team’s sixth-round pick in next year’s draft.

Las Vegas’ status as a “repeat offender” on the COVID front is what prompted the NFL to go heavy with its punishments:

The money is a hefty price to pay, obviously, but there is nothing NFL franchises value more than draft picks. Losing a pick — even a low, sixth-round selection — sends a message to the rest of the league that COVID-19 protocols have to be taken seriously.

The Raiders have not been good about following those rules. Gruden was fined $100,00 when the coach chose not to wear a facemask properly in Week 1, and 10 players (including team leaders Derek Carr and Darren Waller) were fined for attending a charity event in a crowded indoor setting (also without wearing masks). The team was also fined for allowing an unauthorized team employee into the locker room following its Week 2 game.

That’s a lengthy list of violations. In that context, it’s hard to argue with the league for coming down hard on the Raiders this time.