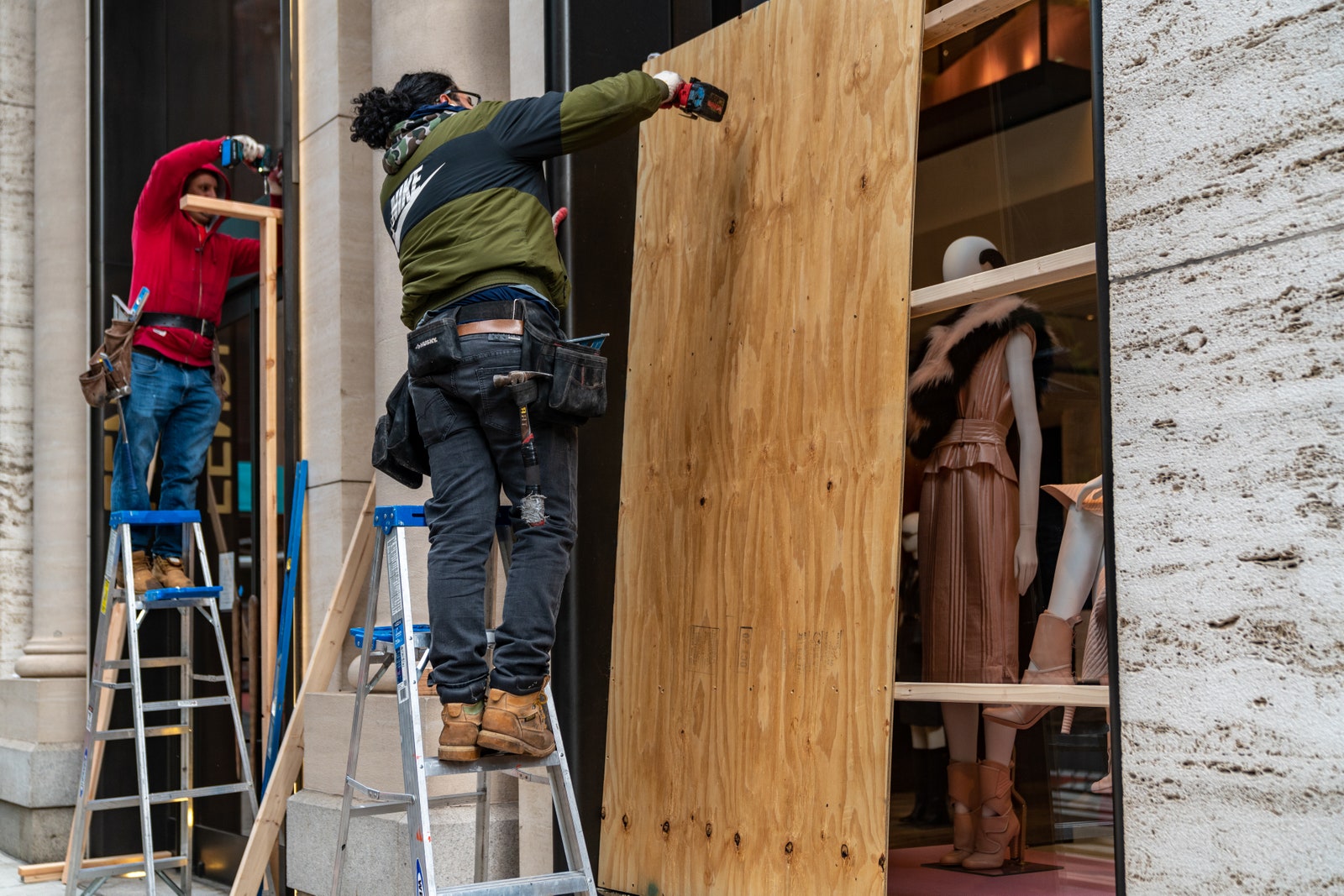 Why Are Stores Boarding Up for the Election?

It’s election day in the United States, and corporate America’s response—besides all those encouraging suggestions to vote—is coming into focus. And it has nothing to do with the ballot box: retailers across America, including Tiffany’s, Macy’s, H&M, CVS, Saks Fifth Avenue, Nike, Sweetgreen, and more are boarding up their windows. The decision isn’t inexplicable, necessarily, though it casts a grim light on the way our corporate overlords see the election.

The boarded up stores in Portland, Seattle, Washington. D.C., and New York, are intended as a safeguard in anticipation of post-election riots. Indeed, the consensus for many business owners seems to be that no matter who wins, someone is going to throw a chair through a shop window. And corporations aren’t the only ones boarding up: earlier this week, the White House was enclosed by a new “non-scalable” fence. (Trump’s star on the Hollywood Walk of Fame, which was destroyed twice last month, has also been boarded up and fenced in.)

While business owners seem confident (or at least cautious) that some civil unrest will follow the results, or possible lack thereof, of Tuesday’s presidential election, for most consumers, the decision has created confusion. Writer Thomas Chatterton Williams tweeted that he went to Soho today “to buy a pair of jeans” (his words) but was unable to because “every single storefront is boarded up.” Imagine denying an Emily Ratajkowski enthusiast a fresh pair of jeans on American democracy’s favorite day! More seriously, it makes all those rallying cries from brands for their customers and followers to get out and vote ring more than a little hollow.

Of course, plywood-filled windows are not an unfamiliar sight in America. (Plywood may be the only thing on earth having a good 2020!) Many stores in New York luxury skateboarding neighborhood Soho boarded up at the onset of the pandemic, a reaction to a health crisis that suggested many brands understood the theft of luxury goods, rather than the bulk purchase of toilet paper, as a primary aim of pandemic-panicked civil unrest. In May and June, in the wake of Goerge Floyd’s murder, several retail corridors in American cities were looted amid protests against police violence—prompting many more stores in cities large and small to board their windows. That decision, as today’s election board-ups remind us, ran counter to brands’ promises of solidarity with protestors. It’s a tricky double-bind: companies now find themselves in the odd position of crafting words of unity while bracing themselves for the violent effect of what they claim to be asking for (all the while begging customers to help them survive by making new purchases). Forget spaces up for lease. The boarded-up store may be the most trenchant symbol of the state of retail in 2020.