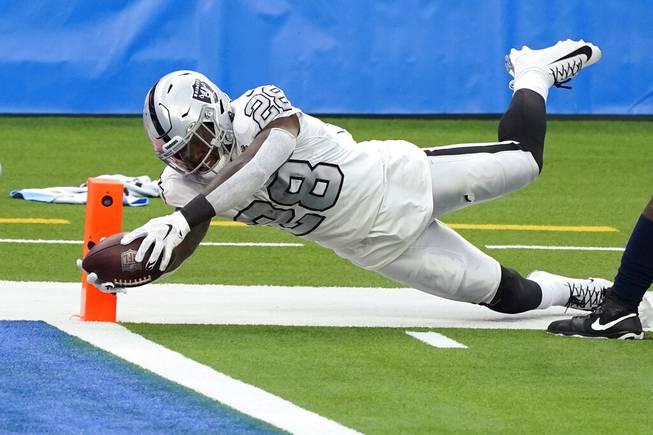 Las Vegas Raiders running back Josh Jacobs scores a touchdown during the first half of an NFL football game against the Los Angeles Chargers, Sunday, Nov. 8, 2020, in Inglewood, Calif.

Last week the Raiders’ running game was all about Josh Jacobs, as Las Vegas rode its second-year star like a workhorse in a key road win at Cleveland.

In Sunday’s victory at Los Angeles, everyone got involved. Jacobs did his thing, of course, picking up 65 yards and a touchdown on 14 carries, but the rushing attack was about so much more than him. Las Vegas mixed and matched along the offensive line and in the backfield and still managed to field a dominant ground game, churning out 160 yards as a team en route to a tight, 31-26 road win over the Chargers.

After two consecutive weeks where the running game has led the way, are the Raiders (5-3) finally on to something here?

Coming into Week 9 the Raiders were ranked 27th out of 32 teams in Football Outsiders’ rushing DVOA rankings, which isn’t a total surprise considering the team has been hit by a string of injuries and COVID-19 issues along the offensive line. But running the ball was supposed to be a strength this season, and until the last two weeks it has been more of a liability.

Last week could be chalked up to a singular performance by Jacobs, but on Sunday it was a team effort. Backup Devontae Booker led the team with 68 yards and averaged more than six yards per carry, and it was his 23-yard touchdown scamper that put Las Vegas on the board in the first quarter.

The offensive line was patchwork, with backups at both tackle positions, and Sam Young and Brandon Parker did their jobs in commendable fashion. Interior linemen Rodney Hudson and Gabe Jackson got their turn in the spotlight by pulling out in front of Booker and leading him into the end zone untouched on his scoring run.

Booker is now averaging a hyper-efficient 6.8 yards per carry on the season (33 attempts, 223 yards) and said his lead blockers made it easy against L.A.

“It’s great,” Booker said. “Them two big dogs, they’re pulling around like on that run I had, the touchdown run, and I’m like, ‘Oh man.’ The Red Sea just opened up and I’ve got two big dogs running in front of me.”

On Jacobs’ 14-yard touchdown run in the second quarter, it was yet another contributor — fullback Alec Ingold — clearing the hole with a devastating lead block.

When the running game is firing on all cylinders as it was against Los Angeles, the Raiders look like a playoff team.

Jacobs said Las Vegas relies on the running game to do two things every week: set the tone and seal the deal.

“We know we’re going to get the ball most of the time at the beginning of the game, and we know that we’ve got to close the game,” Jacobs said. “So just having that mentality, we think that every week we’re going to run good.”