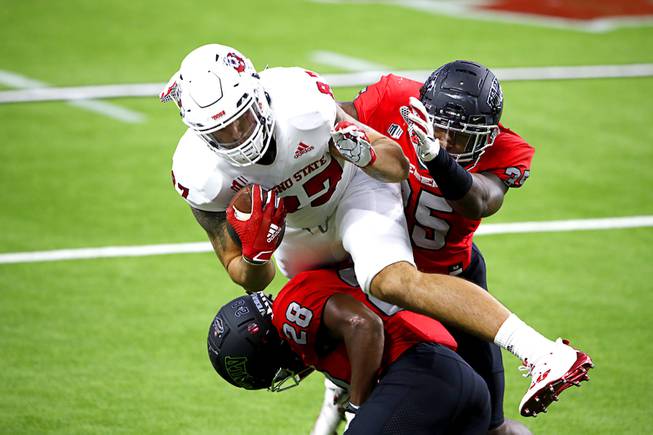 The first three weeks of the 2020 season have not included a lot of defensive highlights for the UNLV football team.

Under first-year head coach Marcus Arroyo and first-year defensive coordinator Peter Hansen, UNLV currently ranks 102nd in the nation in points allowed (37.0 per game), 120th in yards per play allowed (6.9), 123rd in yards per rush allowed (6.2) and 100th in yards per pass allowed (8.4). It’s tough to win that way, and not surprisingly UNLV sits at 0-3 on the season after Saturday’s 40-27 loss to Fresno State.

But if you really want to squint and search for a silver lining, look no further than sophomore Jacoby Windmon.

Windmon, an outside linebacker, is one of the few UNLV defenders who has produced highlights on a weekly basis this year. He was everywhere against Fresno State, notching five solo tackles and 2.5 sacks in the losing effort. Through three games, Windmon is tied for the team lead in tackles for loss (4.5) and leads the squad in sacks (3.5).

Arroyo has stressed that this shortened season has to double as an evaluation period for the rebuilding UNLV program, and it appears the coach has been impressed by Windmon’s production.

As the midway point of the season nears (yes, it is already upon us in this eight-game campaign), Windmon may be distinguishing himself as a defender worth building around.

“He is playing his tail off,” Arroyo said of his young ‘backer. “Jacoby has done an awesome job.”

Windmon is a former 3-star recruit in the Class of 2019 who committed to former UNLV coach Tony Sanchez. The Louisiana native played in all 12 games as a freshman and flashed some upside, and now he is turning that potential into big-time plays.

Arroyo and Hansen demand versatility from their outside linebackers, as that position comes with run-stopping responsibilities, pass-rushing duties and pass-coverage chores. At 6-foot-2, 215 pounds, Windmon possesses the physique and the mentality to handle all those roles.

Windmon showed his varied talents against Fresno State. In addition to his 2.5 sacks (which made him the first UNLV player to record multiple sacks in a game since 2006), he knocked down a couple balls in pass coverage.

Windmon did make one monumental error in the FSU game, as he got called for roughing the passer on a 3rd-and-5 play to keep a Bulldogs drive alive. Three plays later Fresno scored a touchdown, making it a very costly penalty.

Arroyo said it was an example of a young player getting overzealous with a sack within reach.

“He’s got to pull up on that quarterback, which cost us there,” Arroyo said. “But I think he knew that right away. That’s one of the things with guys who play with that type of effort and that type of physicality, is how to pull them back and still not pull their stinger. That was a critical play and he’s going to learn from that.”

Despite the bad penalty, Windmon is the clear breakout player of the UNLV defense so far. And for a team that is searching high and low for playmakers on that side of the ball, that’s something worth getting excited about in a rebuilding year.