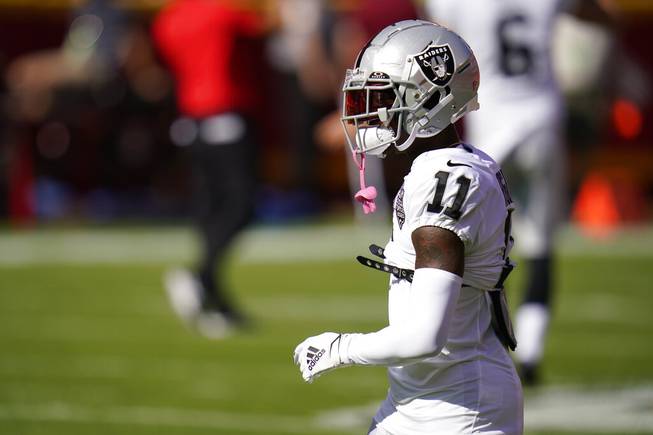 For Henry Ruggs and Jerry Jeudy, it was never a competition.

The former Alabama receivers actively opposed campaigning for themselves in the debate over who should be picked first going into April’s NFL Draft. Everyone around them not surprisingly toed the same line.

Ruggs of course ended up going first, 12th overall to the Raiders, with Jeudy following three picks later as the next receiver off the board to the Broncos. That made them the highest pair of wide-receiver college teammates ever taken in the draft, and regardless of their wishes, guaranteed their professional productions would be forever juxtaposed.

Alabama receiver Jerry Jeudy, left, celebrates with teammate Henry Ruggs III (11) after scoring a touchdown against Arkansas in the first half of an NCAA college football game Saturday, Oct. 6, 2018, in Fayetteville, Ark.

Facing off twice a year as AFC West rivals only further solidified that they’ll be judged against each other going into every matchup. The inaugural meeting comes at 1:05 p.m. Sunday at when Las Vegas (5-3) hosts Denver (3-5), and lately, it’s been evident Jeudy is ahead of Ruggs.

The 6-foot-1, 190-pound prototypical top receiver helped the Broncos erase a 21-point deficit against the Chargers two weeks ago to win 31-30 with four receptions for 74 yards. He was even better in a near comeback at Atlanta last week with 125 yards and a touchdown on seven receptions in Denver’s 34-27 loss.

“I like how Jerry has been playing,” Broncos coach Vic Fangio told ESPN. “I like where he’s headed. He’s been practicing better and it translates to the game. I think he’s doing a good job. His arrow is definitely up and he’s what we thought when we drafted him.”

Meanwhile, the 6-foot, 190-pound Ruggs, the speedier and more explosive of the two receivers, is currently enduring some growing pains. He’s caught only two passes for a total of eight yards in the Raiders’ last two games.

He’s been involved in a pair of memorable plays the past two weeks, but they’ve both been memorable for the wrong reasons.

Ruggs has failed to get both of his feet in-bounds in wins against both the Browns and Chargers.

Referees overturned a touchdown against the Browns and ruled Ruggs’ toe hit the sideline in the end zone. In Los Angeles, Ruggs couldn’t get both feet down when quarterback Derek Carr went deep to him on a third-down play late in the game.

“We have to work with Henry Ruggs,” Raiders coach Jon Gruden said. “We have to get Ruggs some white-line work. He has to get those two feet in.”

Securing catches in-bounds is far from an unprecedented problem for rookie receivers, which must navigate a rule change from only needing to get one foot down in college to two in the NFL. It’s something Ruggs is highly likely to fix sooner rather than later.

He’s done nothing to indicate he’s unworthy of the high draft pick Las Vegas used on him. There’s certainly not enough evidence to conclude the Raiders erred by not taking Jeudy as some have suggested.

Eight games is not an adequate sample to assess the long-term prospects of either player. Jeudy has been better recently, but Ruggs started the season more smoothly.

Although his volume of targets has never been high — he’s averaging 3.5 targets per game — Ruggs showed an immediate ability to haul in most everything thrown his way and get behind opposing defenses.

He had three catches of at least 45 yards in his first three games. In the same span, Jeudy had three drops.

The Broncos didn’t overreact to Jeudy’s early struggles, and the Raiders aren’t going to overreact to Ruggs’ recent hiccups.

As both players made clear coming into the draft, they’re rooting for each other. They’ve maintained a close friendship and even streamed a pair of Madden 2021 games played against each other a couple weeks ago.

They also had a showdown on the Madden Competitive Gaming YouTube channel when Jeudy poured it on Ruggs in the video game and ran up the score in a 36-21 win.

“My bad fam,” Jeudy told Ruggs after converting a two-point conversion in the final seconds. “You know it’s all love bro. I just had to ruin your little streak real quick.”

Ruggs smiled and laughed it off. They’ll probably share a similar exchange one way or the other after the game at Allegiant Stadium on Sunday.

While everyone else may want to stack them up against each other, Ruggs and Jeudy seem disinterested in fostering any type of personal rivalry.