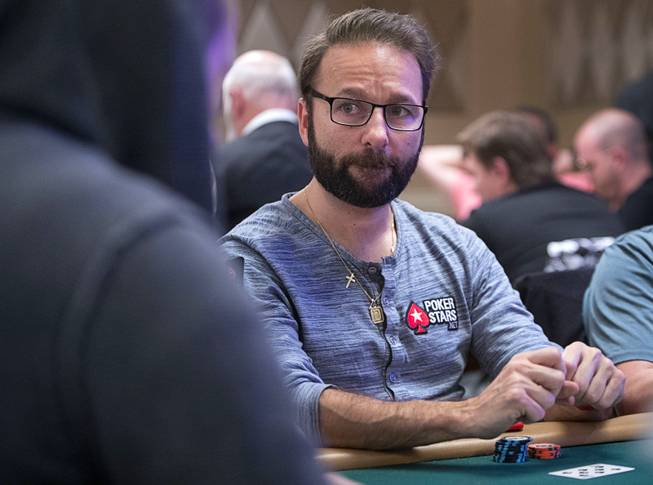 Daniel Negreanu competes during day 2c of the World Series of Poker Main Event at the Rio Wednesday, July 12, 2017.

The long-simmering tension between live poker professionals and their online counterparts has exploded into one of the biggest one-on-one card showdowns in the history of the game.

Daniel Negreanu and Doug Polk are in the middle of playing 25,000 hands of heads-up no-limit hold’em at $200/$400 blind levels after depositing $1 million apiece on WSOP.com.

The first 200 hands were played in person at Aria—and are available to watch for free on streaming service PokerGo’s YouTube channel—but the rest of the challenge will take place exclusively online in sporadic sessions over the next several weeks.

The 46-year-old Negreanu is considered one of the best live tournament players ever and ranks third all-time with $42 million in career earnings. The 31-year-old Polk is an online savant regarded as one of a few players to come close to mastering optimal strategy in heads-up competition.

Polk came out of a two-year poker retirement for the opportunity to face Negreanu and settle one of the biggest rivalries the game has ever seen. We spoke to both men about the way the hostility has grown, and how High Stakes Feud, as PokerGo is calling the match, came to be.

The rivalry started in 2014, when Negreanu answered a question on Twitter and said he could beat $25/$50 blind cash games online—which carry around a $5,000 buy-in—after two weeks of practice. The online community mocked the claim, with Polk characterizing it as “naive.”

Polk: “If you want to make it to the top of online poker, you have to be unbelievably good. [In] the live poker world, you still need to have skills, but it’s a different skill set. It’s more networking. It’s more making friends with rich people who will lose money to you and playing in tournaments with a lot of bad players. The online community tends to be significantly better at actually playing poker. So to say you could beat the games was just so off-base. It’s like someone who plays golf on the weekends saying in two weeks they could join the PGA Tour. It’s not possible.”

Negreanu: “This is how he tried to make a name for himself, attacking people with big followings without any concern for honesty or framing things in a fair picture. It was just attack, attack, attack. It was clickbait for people to see what he was doing and get views for his poker-training videos, his company that he could profit from. Right around then, I became his biggest target, because I had the biggest following in poker on social media.”

Things escalated in early 2016, when PokerStars raised its rake—the amount of money it takes from players to operate. Negreanu, who was a PokerStars-sponsored pro for 12 years, partially defended the highly controversial decision.

Negreanu: “I did a 30-minute interview where I said four words within the context of a paragraph, a sentence, and he just discarded all the rest and used four words—‘more rake is better.’ He labeled me as an evil corporate monster who wants to raise prices on everyone. That’s the picture he painted, and it’s just dishonest.”

Polk: “He was saying it’s good for most players, because now the good players can’t win, and obviously, it wasn’t good for any players. I felt like over time he changed from the guy who stuck up for players to a guy who made money by being sponsored. I can understand that. It’s a good career and people want to make money, but you can’t do things that aren’t in the interest of players and then pretend it’s in their interest. I think he lost touch with the base of players he used to stand up for and became a corporate shill.”

Polk and Negreanu continued clashing for the next couple of years. “More rake is better” became Polk’s punchline—he purchased a billboard outside the Rio with the phrase on it going into the 2018 World Series of Poker and wore a shirt printed with the words when the two sat next to each other in a $300,000 buy-in tournament at Aria.

Polk: “I’ve thrown a lot of jabs, but I don’t feel any hostility towards Negreanu. I don’t hate him, but I think he’s fake and doesn’t know who he is. The reality of the situation is, he wants to be the good guy and he’s not the good guy anymore.”

Negreanu: “I realize how insecure he is and how much pain he must be in to live a life as a troll. People who do that aren’t doing that because their lives are happy or working. They’re doing that because they’ve got some deep-seated insecurities and pain. So I look at him more with empathy than disdain, because nothing he says is going to have any real effect on me.”

Negreanu drew the ire of the online community again this past summer when he went on a tirade against a viewer on one of his Twitch streams and got banned by the platform. In the fallout, the seemingly dormant rivalry returned to life, with Polk tweeting that he would come out of retirement to face Negreanu.

Polk: “I thought there would be no chance he would accept, because he knew he would lose a lot of money. He insulted me, so I just called him out to make him look bad. Poker is funny in that people challenge each other just so when the other guy says, ‘No I don’t want to play,’ they kind of look like a wimp.”

Negreanu: “I [figured], ‘What the hell? It’s a COVID year.’ The world is upside down. I’ve got a lot of free time here at home. I definitely thought this was something the poker world wanted to see. They’ve been clamoring for it for a long time.”

The two didn’t speak in person, so the negotiation process regarding the format and rules of the competition lasted months before beginning November 4 at Aria.

Negreanu: “We did it all transparently, out in the open on Twitter. That was the method I chose, and frankly, it worked out pretty well. He didn’t like that, because he looked really bad in all this. Public opinion saw how he was dealing with it and how he was acting like a petulant child.”

Polk: “It was a bit strange, because when you have a challenge, people should talk to each other. I would say it was a very public and inefficient way of doing things.”

Negreanu: “Essentially, in four weeks before we started, I tried to cram four years’ worth of information into my brain. Luckily, I have a good sponge of a brain, and my hope is that throughout the match, I’ll continue to learn and get better as we get deeper.”

Polk: “The betting market has me somewhere between a 4- to 5-to-1 favorite, and I think that’s underselling me. I think the true price should be 10- or 20-to-1. The reality is, I’m playing super high stakes against a player who’s a lot worse than me.”