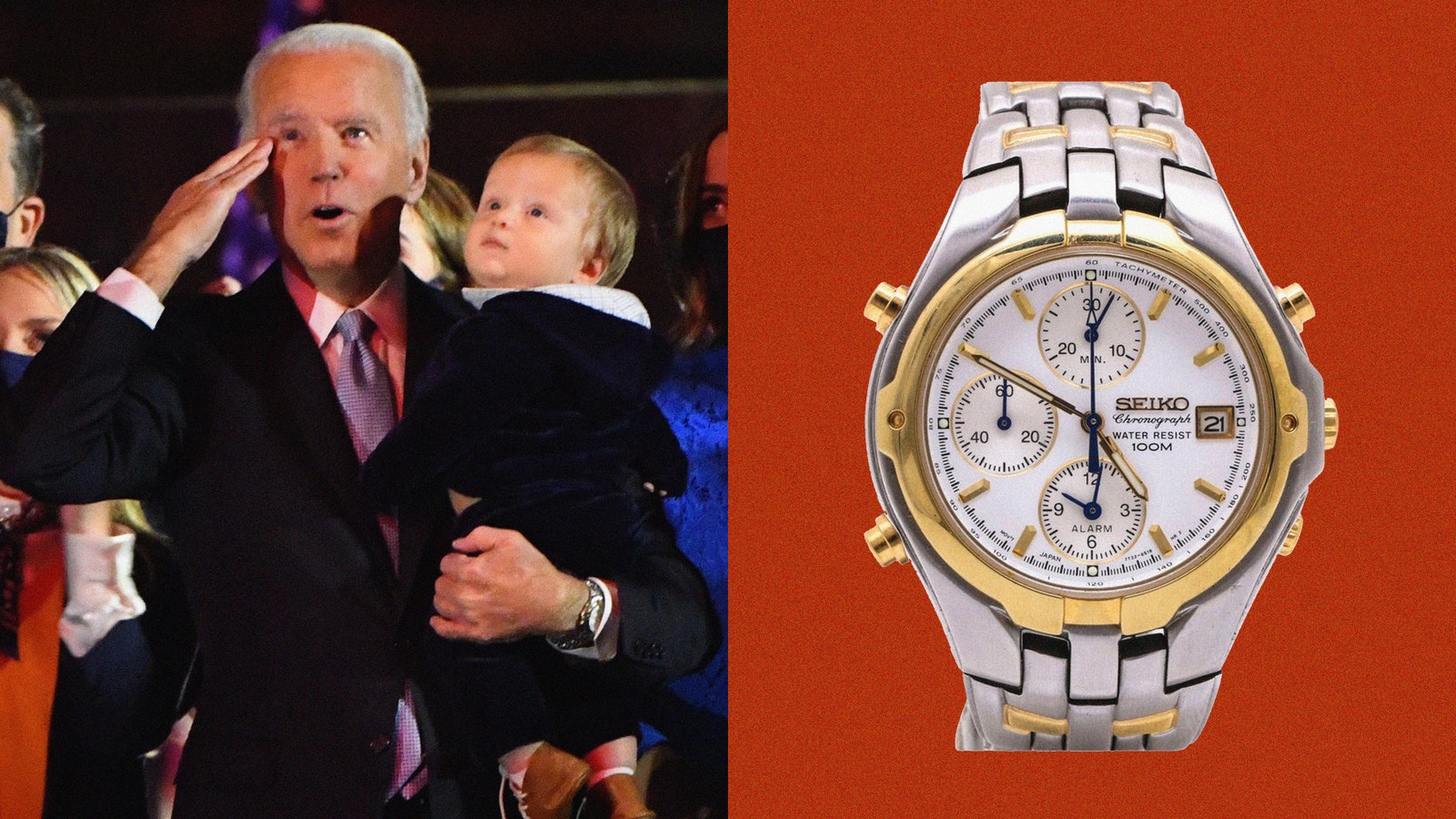 This Is Joe Biden’s Victory Watch

Presidents have long worn watches, but over the past couple of decades, timepieces have increasingly served as props: ways for presidents and Oval Office hopefuls to telegraph something about their approaches. Bill Clinton and his Ironman Timex wrist monster (theoretically) ingratiated him with the common man. When Mitt Romney ran for president in 2012, he had millions in the bank—and maybe some Pateks in the closet—but he often wore watches from Nixon or Seiko that belied his massive net worth. Donald Trump, who projected the image of a successful businessman who would apply that same acumen to governing, alternated between a gold Rolex and a Vacheron Constantin Historiques Ultra-Fine 1968 that costs upwards of $25,000. That’s all to say: watches are usually the most obvious kind of symbols. But Joe Biden’s watch is not so easily decoded.

In his first act as president-elect on Saturday night, Biden took the stage in his Seiko 7T32-6M90 Chronograph. This was a bit of a swerve: at least since becoming Vice President in 2008, Biden has been best known for his patronage of Omega. He owns a Speedmaster and Seamaster, both of which he wears frequently. But over the past couple weeks, he’s taken to wearing this Seiko the most. Whether he was campaigning on a train in Pennsylvania, debating Trump, or giving his first speech as president-elect—boom—there was that Seiko. The watch is far from common— it took a whole conga line of watch experts to finally pin down the piece. It’s cheap—variations of it can be bought for less than $100–but looks like it could be much more expensive. The piece is gold-plated in areas and looks strikingly similar to certain variations of the Tag Heuer Link, a watch worth thousands that shares this Seiko’s sharp pushers and unusual-looking bracelet. (Romney actually wore a very similar-looking Link on the 2012 campaign trail.)

Fittingly, the watch has a bit of everything a president needs. Like the Vulcain Cricket former presidents gravitated towards because it featured an alarm function—which projected seriousness and punctuality in Lyndon B. Johnson’s day—this watch can also be used for wake-up calls. The Seiko is very inexpensive, to meet the demands of modern-day politicking. It also doesn’t shy away from some at-first-blush flashiness—think of it as the Lincoln Project of watches, baiting former Trump voters to Biden’s side.

But Joe’s not the only member of his team with an eye for the wrist. This week, we examine the Biden campaign’s watches.

This may be the very first time a Seiko appeared on the wrist of a president. It’s not the first time a president’s gone for an affordable alternative, though: after Ronald Reagan wore a Rolex Datejust, presidents started shying away from expensive pieces. Bill Clinton and George W. Bush both wore Timexes, and Barack Obama most famously wore a Jorg Gray given to him by his Secret Service detail. The next four years will be very different from a watch perspective. There’s a large community of Seiko collectors but this is the first time one will occupy the Oval. But then again, there will be much more historic firsts associated with Biden’s presidency…