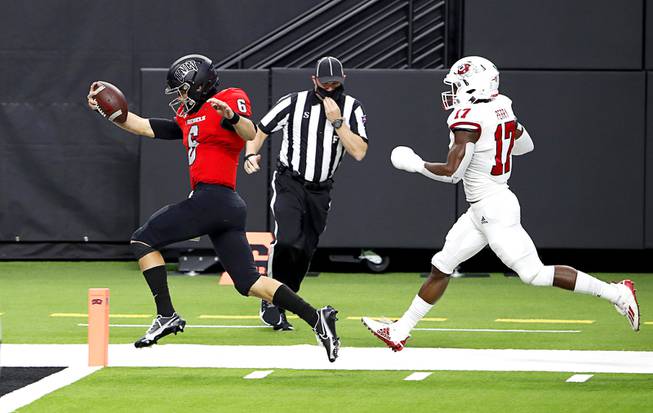 UNLV has started the season 0-3 and gotten outscored 111-52 in the process, but the team has slowly made progress over the first month of the season. Last week’s game against Fresno State was tied heading into the fourth quarter, so perhaps Marcus Arroyo’s crew is on the verge of breaking through into the win column.

Will it happen today, when UNLV travels to take on undefeated San Jose State? Three keys to watch:

Max Gilliam is not a runner. More often than not, the yardage he loses on sacks outweighs his gains in the rushing game. But last week, the senior pulled the ball down 16 times and ran for 139 yards, including a 71-yard touchdown. He also used his legs to pick up some key first downs in the first couple games, and at this point in the year it looks like Gilliam’s scrambling might be the most efficient aspect of the offense.

It would be unwise to build an offensive game plan around Gilliam’s legs, but there’s a difference between calling QB sweeps and, say, encouraging him to pull down the ball and run when the opportunity presents itself. Arroyo should definitely be doing the latter.

In situations where it makes sense — third downs plays or plays when the defense is playing man-to-man and has its backs turned to the line of scrimmage, etc. — Gilliam should have the green light to run.

UNLV has struggled to block in the running game, and that has made it difficult for the team to take advantage of its biggest weapon, running back Charles Williams. The senior is averaging a good-not-great 4.1 yards per carry and has only recorded 268 yards and one touchdown on the year. And it’s unlikely to get any better against San Jose State.

The Spartans rank 21st in the nation in rushing defense (3.4 yards per carry allowed), so it might be prudent not to rely on Williams carrying the load on the ground. But UNLV can’t abandon him entirely because there aren’t a lot of other weapons on the offense. Would it be possible to get the ball to Williams in the passing game? That hasn’t been a big part of the game plan yet; Williams has only caught eight balls for 29 yards this year, but a more concerted effort to throw it to him in space might work better against San Jose State’s defensive front.

Pass defense has been virtually nonexistent for UNLV this season, and opponents are taking advantage by throwing deep. The secondary is allowing 13.8 yards per completion, which ranks 100th in the nation, and San Jose State’s quarterback — whether it’s Nick Starkel, who left last week’s game with an injury, or replacement Nick Nash — will be sure to test them early and often.

SJSU throws the ball 35.5 times per game, 37th-most in the country, and they air it out to the tune of 8.1 yards per attempt (31st). UNLV’s cornerbacks and safeties are unlikely to keep close in coverage, so it will be up to the scarlet and gray pass rushers to help limit the damage. It will take a herculean effort from defensive end Adam Plant and emerging linebacker Jacoby Windmon to get to the quarterback before he can unleash the deep ball.

How to watch: Fox Sports 2