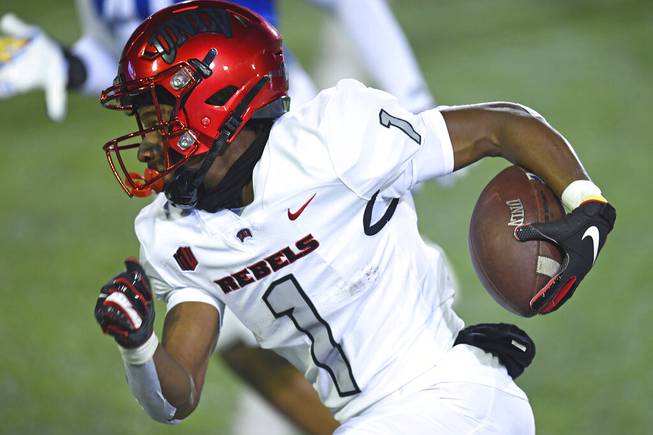 At midway point, disappointing UNLV has no choice but to look forward

If you’re UNLV football, when do you wave the white flag on the 2020 season?

Marcus Arroyo decided to do it with four minutes left in Saturday’s 34-17 loss at San Jose State. Trailing by three scores and facing a 4th-and-2 at his own 32 yard line late in the fourth quarter, the first-year head coach called the offense to the sideline and sent in the punt team.

The message was clear: This game is over. And now it’s time for UNLV to forget about chasing wins and focus on building for the future.

What will that look like over the second half of this truncated season? We may have gotten a glimpse of it on Saturday, as Arroyo yanked ineffective senior Max Gilliam in the second quarter and inserted untested sophomore Justin Rogers at quarterback. Rogers immediately led UNLV on a touchdown drive, and though his play was up and down throughout the remainder of the evening, he showed enough flashes to warrant continued playing time in the coming weeks.

Arroyo said the plan going into the game was to play both quarterbacks, but Rogers clearly outperformed Gilliam by completing 12-of-18 passes for 162 yards and a touchdown.

That performance should earn the TCU transfer some extended action over the final four games, as the team seeks to clarify its depth chart at the most important position heading into the offseason.

“Justin has worked himself into the rotation because he had a good camp,” Arroyo said. “We’ve got to find a guy that’s going to make us functional and efficient. Those guys have been competing in the early stages of our program, and that’s not going to change. The quarterback position in our program now, the ceiling is going to be really high.”

While Rogers attempted to seize the mantle of “Quarterback of the Future,” freshman wide receiver Kyle Williams announced himself as another key cog in UNLV’s rebuilding plan by hauling in nine catches for 110 yards and a touchdown.

Rogers’ touchdown pass was a 19-yarder to a wide open Williams, who shook free of coverage on a seam route and gave his quarterback an unmissable target in the end zone. Williams, a 6-foot California native, has gotten better each week; over the last two games he has 14 catches for 162 yards.

UNLV also got some production from young skill players like freshman receiver Zyell Griffin, who caught three passes for 68 yards, and sophomore running back Courtney Reese, who carried three times for 27 yards.

It only added up to 17 points on the scoreboard, but when a team is 0-4 and staring down the barrel of a potentially winless season, any hope for the future is welcome — especially when there is so little to be found on the other side of the ball.

UNLV might have one of the worst defenses in the country, and while the offense has players like Rogers and Williams and Reese and Griffin to generate some excitement for 2021 and beyond, few defenders have distinguished themselves as building blocks to this point in the season.

San Jose State averaged 8.0 yards per play (excluding kneeldowns) and racked up 457 total yards. UNLV has allowed at least 34 points in all four games this season, and San Jose State could have run up the score but decided to sit on the ball at the UNLV 10-yard line late in the fourth quarter.

Sophomore linebacker Jacoby Windmon was once again a lone bright spot, as he recorded a sack, a forced fumble and eight tackles on the night. Windmon now has 4.5 sacks on the season.

UNLV will head to Colorado State next week and while notching a win would be nice, that will likely be a secondary goal, as Arroyo’s main task over the next four games will be to develop the roster with an eye toward 2021. That means playing time for heralded freshman defenders like linebackers Brennon Scott and LeShaun Bell and more responsibility for Rogers, even if mistakes are made and win probability is sacrificed in the meantime.

The white flag is out. Next season is now for UNLV football.