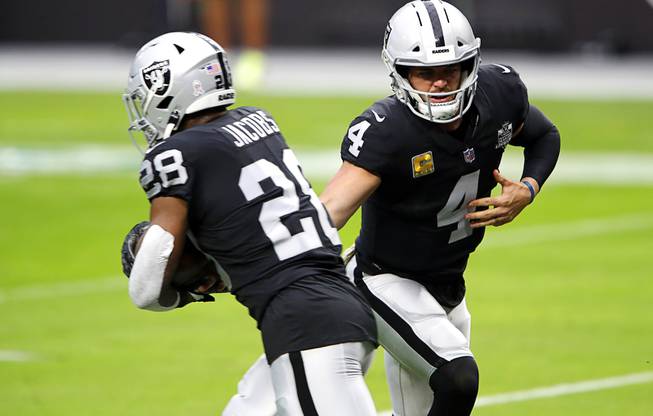 Las Vegas Raiders quarterback Derek Carr (4) hands off to running back Josh Jacobs (28) before a game against the Denver Broncos at Allegiant Stadium Sunday, Nov. 15, 2020.

In an alternate universe, Derek Carr was the star of Sunday’s 37-12 win over the Denver Broncos.

In reality, Carr had a quiet day at the office, mostly serving as a game manager while the Raiders ran for 203 yards as a team and scored four rushing touchdowns. But if not for a few near-misses that were mostly beyond his control, Carr could have had a banner day.

Nelson Agholor dropped a 6-yard pass in the back of the end zone. Darren Waller dropped a potential 55-yard touchdown pass. Henry Ruggs let a long bomb slip through his hands.

When all was said and done, Carr finished with a pedestrian stat line, completing 16-of-25 passes for 154 yards, with no touchdowns.

And he couldn’t have been happier about it.

“It’s kind of nice that we can win in multiple ways,” Carr said. “Once we find what’s working, we’re going to do that. When we get in the games and people want to play a certain way, alright, then perfect, we know what we’re going to do. It’s been really fun, really exciting.”

Sure, another 300-yard, three-touchdown game would have made for a nice entry in Carr’s 2020 game log. The seventh-year veteran is putting together perhaps his finest pro campaign, as he’s now completed 69.3 percent of his passes for 2,156 yards and 16 touchdowns, with two interceptions. But it’s because of those years of experience — including five losing seasons out of six — that Carr is content to do whatever the game calls for in order to win.

On Sunday, against a Broncos defense that had trouble getting off blocks, that meant feeding the ground game. Josh Jacobs carried 21 times for 112 yards, Devontae Booker carried 16 times for 81 yards, and each scored a pair of touchdowns to account for the bulk of Las Vegas’ point total.

The Raiders’ defense held Denver in check all day, forcing five turnovers, so there was really no need for Carr to take matters into his own hands, like he did in wins over New Orleans (284 yards, three touchdowns) and Kansas City (347 yards, three touchdowns). In fact, Sunday was the first game all season in which Carr failed to throw a touchdown pass.

But he got the win, and as Carr continues to steer the Raiders toward the playoffs, that’s what is most important to him.

“We’ve won games where we ran it a whole bunch and didn’t throw for it much, and we had to win games in shootouts,” Carr said. “The cool thing about that is we can do it both ways, which in this league you have to be able to do both.”