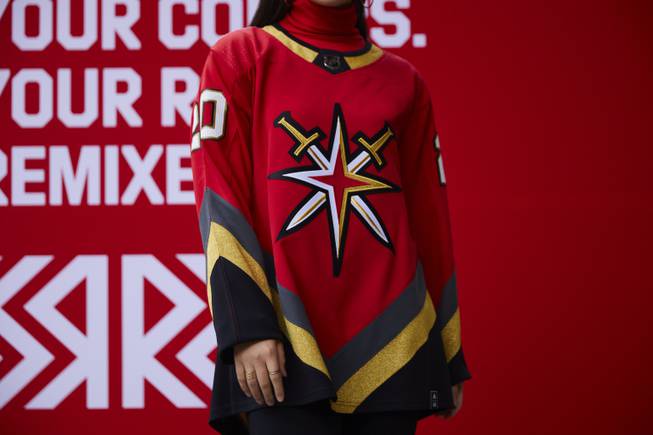 The Vegas Golden Knights’ Reverse Retro jersey was introduced for the 2020-2021 season.

A team that is three years old doesn’t have much history. So when the NHL and its jersey supplier, Adidas, launched the Reverse Retro program this year, the Golden Knights dipped back into Las Vegas hockey history.

The Golden Knights unveiled a red uniform with a sword-and-star crest on the front today to be worn during the 2020-21 season.

It’s modeled after the uniforms of the Las Vegas Thunder and Las Vegas Wranglers, two minor-league teams that played in the valley in the decades before the NHL arrived.

The red color is for the Wranglers, who played in the ECHL from 2003-14. The striping on the uniform is an ode to the Thunder, which played in the IHL from 1993-99.

The Golden Knights chose 1995 as their year to emulate, which is to commemorate the Thunder’s best season in 1995-96 and the 1994-95 season Manon Rheaume, the first woman to play in the NHL, played for the Thunder.

“No VGK jersey would be complete without something new,” the team said in a statement. “It is a tribute to the pioneers of the past in a sparkling new sweater for the future. A combination that can only be seen in Vegas.”

The Reverse Retro jersey will enter the rotation of game uniforms for the Golden Knights, who also added gold to their wardrobe this year, giving them four options.

The Reverse Retro is the first Golden Knights jersey that doesn’t include the V-helmet crest and jersey striping that graces the other three uniforms.

The new jersey will be available for purchase by fans on Dec. 1. Preorders are available at the team shops at City National Arena and T-Mobile Arena as well as vegasteamstore.com.