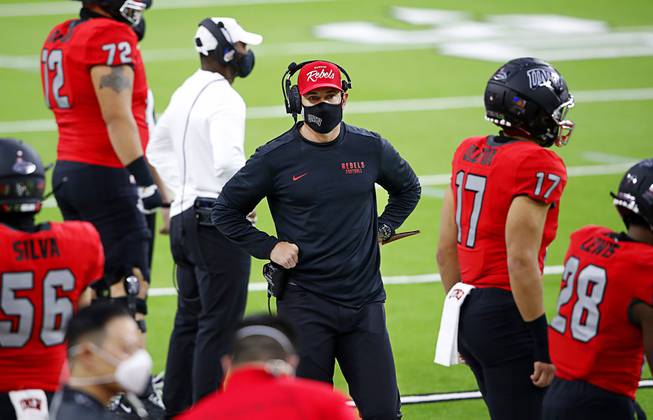 In UNLV’s season opener at San Diego State, junior safety Tre Caine got burned for a long gain when he bit on a two-receiver pattern and let the deep man run past him.

On Saturday, San Jose State tried to run a similar play. This time Caine made the proper read, stayed back and intercepted the pass — the first interception of the year by a UNLV defender and first time a Spartans quarterback had been picked off all season.

UNLV eventually lost that game, 34-17, to fall to 0-4 on the season, but during his Monday press conference first-year head coach Marcus Arroyo pointed to Caine’s play as an example of how the program-wide rebuilding effort is beginning to gain traction.

“It was the same exact type of play in coverage that it was four weeks later, and he got the pick,” Arroyo said. “That’s why you saw me come off the sideline and jump up with him and almost break my headset, because we came back on Sunday, showed that clip, and it’s not something crazy to us as coaches — there it is again and he makes the play. It was so exciting to see a guy like that step up in that regard and go through the process.”

As excited as he may have been on the sideline at time, Arroyo knows that not all of the progress UNLV makes this season is going to be as tangible as Caine’s interception, but the former Oregon offensive coordinator is hopeful that the little things may end up being just as impactful.

Despite the team’s winless record, Arroyo said the players haven’t gotten discouraged and continue to approach the season the right way when it comes to the off-the-field stuff.

“The growth right now in the stages that we’re at, in any build, the stat line is not going to support some of the things that are foundational,” Arroyo said. “Are guys coming in late to our building after being 0-4? No. No one shows up late. No one’s missed COVID tests. No one’s not doing what they’re supposed to be doing.”

On the field, there is still obviously a lot of work to be done. Arroyo described the quarterback situation as an ongoing competition, praised the emergence of the team’s young receivers and hinted at increased playing time for heralded freshman linebackers Brennon Scott and LeShaun Bell.

The coach was straightforward with his timeline, however. While he didn’t come right out and say UNLV is going to continue to be bad for a while, Arroyo made it clear the rebuild has yet to take root and that wins are still theoretical at this point.

Arroyo said that is by design, and that the end result will require patience.

“Myself and my staff know this is not a patch-up job,” Arroyo said. “When you tear down a house and rebuild it there’s going to be an awful lot of debris. It may look scary at times, but I’m confident with our plan and our staff and the architects of the plan that we’ll build something successfully, the right way for the long term. That’s what we were brought in to do, and that was the vision. I know that takes patience and persistence and it will be handled with care every step of the way. I’m not into just plugging up some holes on a short term, or cheap fixes that you end up paying for tenfold down the road. That creates an unsteady foundation and I’m not into that.”

Arroyo’s first recruiting class was ranked No. 2 in the Mountain West, according to 247Sports, and some of the newcomers have already shown serious flashes of potential. Freshman wide receiver Kyle Williams had his first 100-yard game against San Jose State and freshman Nohl Williams has started all four games at cornerback.

Arroyo said he and his staff will continue to prioritize recruiting and developing young players as a foundational element of the rebuild.

“Talent acquisition, player development, scheme implementation, and then assessment are the four things that are going to give yourself a chance to make sure the foundation in anything you’re doing has a chance to stand up for a long time. I wasn’t interested in coming here to make a wardrobe change; I’m interested in coming here to build something that stands up for a long time.”