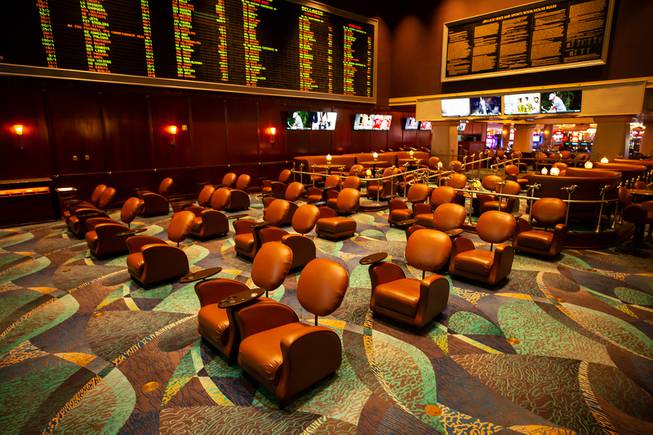 Seating in the BetMGM Sportsbook is spaced out in order to maintain social distancing standards, as seen during a media preview at the Bellagio, Monday June 1, 2020. These new measures are a part of MGM Resorts’ 7-point health and safety plan for guests and employees as they re-open to the public this coming Thursday, June 4th.

Betting this college football season has felt like experiencing a recurring case of whiplash.

The swings have been the most violent I’ve ever encountered, and they’ve been evident in this column — especially last week. After three straight winning weeks on plays, I crashed in Week 11. I crashed big.

I went 0-8 on plays and 14-21 overall picking every game kicking off Friday or later. Talk about wiping out progress in painful manner.

I’m going to try to steer back on course methodically despite having a limited number of games left to do so. Chasing is the never answer and would only increase the possibility of the first losing season since starting this iteration of the college football by the odds column three years ago.

That can’t happen, so I’m out to make a move upwards slowly but surely.

Cincinnati -6 at UCF, over/under: 63.5. Line has moved six points in Cincinnati’s direction, which is too much. The Bearcats don’t deserve to be any more than a small favorite in a game against the best offense it’s seen all season. Play: UCF +6.

East Carolina -3.5 at Temple, over/under: 57.5. These teams are even statistically, and yet the line has shifted a touchdown in East Carolina’s favor. That’s an indicator that the Owls are unlikely past the coronavirus infections that have hampered their whole season. Guess: Temple +3.5.

Liberty +3.5 at NC State, over/under: 67.5. The two teams’ schedule strengths aren’t all that much different from one another, and Liberty has played far more efficiently. Get this before it closes below a field goal. Lean: Liberty +3.5.

Clemson -35 at Florida State, over/under: 63. The talent discrepancy has never been larger between these one-time rivals. I would need at least 40 points to consider the Seminoles. Guess: Clemson -35.

Wisconsin -7 at Northwestern, over/under: 44. Northwestern has won three straight games by a touchdown or less and therefore might be getting too much credit for its 4-0 record. The Wildcats are great defensively but haven’t encountered a team like the Badgers and quarterback Graham Mertz. Play: Wisconsin -7.

Purdue -3 at Minnesota, over/under: 61. Purdue’s abundance of injuries now extend to quarterback where Aidan O’Connell will be a game time decision. Purdue’s offense has been underwhelming even with O’Connell under center and may provide a chance for Minnesota’s defense to get back on track. Play: Minnesota +3.

Iowa -2.5 at Penn State, over/under: 47. A couple weeks ago, Penn State would have been a decent-sized favorite in this spot. Iowa has played at the very top of its range in combined 84-14 victories over Minnesota and Michigan State the last two weeks and should at least come back to Earth slightly. Lean: Penn State +2.5.

Indiana +20.5 at Ohio State, over/under: 66.5. With last week’s cancelation, Ohio State got gifted extra time to prepare for what suddenly looks like it’s only challenging game remaining on the schedule. That’s an advantage that could be worth an extra point or two on the spread. Lean: Ohio State -20.5.

Michigan -10.5 at Rutgers, over/under: 55. It’s easy to understand the reluctance to get involved with a tumultuous Michigan side right now, but its talent should dwarf Rutgers’. If the Wolverines don’t get on track this week, they’re officially never getting on track this season. Guess: Michigan -10.5.

Illinois +15.5 at Nebraska, over/under: 59. Nebraska has played a much tougher schedule than Illinois, and yet the Cornhuskers sit at -0.4 net yards per play to the Illini’s -1 net yards per play. Nebraska shouldn’t have any trouble winning this game, though its lack of consistent explosiveness on offense merits some pause in laying more than two touchdowns. Guess: Nebraska -15.5.

Oklahoma State +7 at Oklahoma, over/under: 59. Sell high on an Oklahoma offense that has been rolling for the past month but struggled to start the year. It’s important to note that the Sooners haven’t played a defense anywhere near as stout as the Cowboys’ unit, which rates in the top 10 in the nation by most all-encompassing analytics. Lean: Oklahoma State +7.

Rice +1 at North Texas, over/under: 63. Neither the Owls nor the Mean Green have played in weeks thanks to cancelations, but the latter had looked much improved in their first two games. If anything, North Texas looked as bad as ever in its first five games. Guess: Rice +1.

UTSA -9 at Southern Miss, over/under: 51. Southern Miss is down two head coaches and numerous players, but this is a giant adjustment against a UTSA side with a lesser roster. The Roadrunners also put a lot into last week’s 52-21 rivalry win over UTEP as 5.5-point favorites and it’s a lot to ask them to play that well two weeks in a row. Guess: Southern Miss +9.

Georgia Southern +4 at Army, over/under: 41. Prefer to take the points in what should be one of the quickest, most low scoring games of the week. Both teams’ option attacks should neutralize each other and make this a virtual coin flip. Guess: Georgia Southern +4.

New Mexico +7 at Air Force, over/under: 55.5. New Mexico has covered two straight, losing by a total of only 13 points to UNR and Hawaii, but it’s been outgained by more than 1 yard per play in those games. Air Force hasn’t played in three weeks, and unless it’s more crippled by coronavirus absences than reported, this number is too small. Guess: Air Force -7.

Boise State -14 at Hawaii, over/under: 58. Don’t mind paying a premium with the Broncos now that quarterback Hank Bachmeier is back. Hawaii has already gotten blown out by lesser sides in San Diego State and Wyoming. Guess: Boise State -14.

Arizona +11 at Washington, over/under: 54.5. The Huskies played much better than the final score indicated in a 27-21 win over Oregon State as 13.5-point favorites. They were my biggest bet-on team coming into the Pac-12 season, and they’ve done nothing to lose that distinction. Play: Washington -11.

Washington State +2.5 at Stanford, over/under: 64.5. Cougars freshman quarterback Jayden de Laura has been among the most exciting players to watch in the last couple weeks and should be able to keep his team in a likely shootout. This year’s Stanford team looks like it’s continuing the drop-off the program experienced last year. Lean: Washington State +2.5.

USC -3 at Utah, over/under: 58. Teams playing in their first game, like Utah, have outplayed teams in the middle of their schedule, like USC, all season long but it’s debatable if the Utes have any other edges. They lost almost all of their starters, putting them at a disadvantage against a team as experienced as USC. Guess: USC -3.

Mississippi State +24 at Georgia, over/under: 44.5. Several Mississippi State players have left the program with more reportedly unhappy, and the effect has been evident on the field. Coach Mike Leach’s team has been outgained by at least 2 yards per play in each of the last three games and may continue bottoming out. Lean: Georgia -24.

Tennessee +10.5 at Auburn, over/under: 50.5. Number looks fair but Tennessee may reportedly starting giving younger players more snaps including at quarterback where freshman Harrison Bailey may start. Auburn is more concerned with the now, and the better side to begin with. Guess: Auburn -10.5.

Kentucky +30 at Alabama, over/under: 58. I’m never in any rush to bet against Alabama but market perception seems to have risen significantly on the Crimson Tide in the three weeks since it played a game. This is the biggest favorite they’ve been all season despite playing a few teams worse than the Wildcats. Guess: Kentucky +30.

LSU -2 at Arkansas, over/under: 62.5. Even with a few of the Tigers sitting out for the rest of the season, this is a matchup between a rested side of blue-chippers against a rebuilding, albeit scrappy, team playing its fourth straight week. LSU -3 would be a fair price. Guess: LSU -2.

Florida -31.5 at Vanderbilt, over/under: 68. Florida hasn’t shown mercy on any team all season. There’s no reason to believe Vanderbilt will be the first recipient in a guaranteed blowout. Guess: Florida -31.5.

Arkansas State -6 at Texas State, over/under: 67. Both teams are such sieves defensively that it’s dangerous to back either. The Red Wolves have more playmakers on offense, though, with a strong receiving core around quarterback Logan Bonner. Guess: Arkansas State -6.