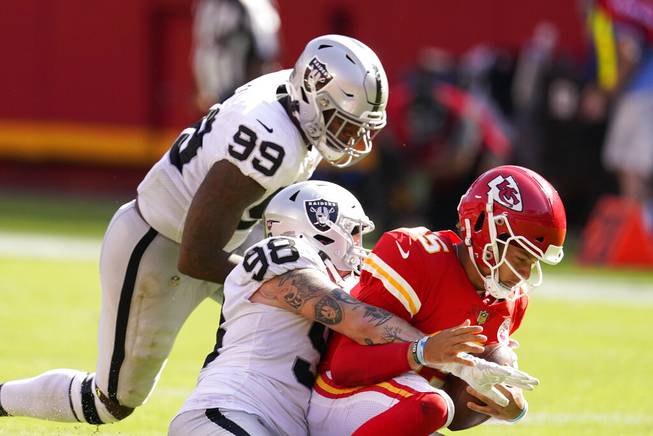 The Las Vegas Raiders’ 40-32 victory in Kansas City last month is the best win by any team in the NFL this season, and it might not be close.

It’s the Chiefs’ only defeat in the last year as the champions had won 13 straight games going into the Week 5 meeting and have prevailed in all four contests since. As hard as it was for the Raiders to beat the Chiefs once, it’s arguably going to be even more difficult to do it again when the two teams meet tomorrow at Allegiant Stadium on Sunday Night Football.

The Raiders now know the path to victory against the Chiefs, however, and should be able to forge it again if they can replicate some of their successes from the first game. What were the most important of those successes?

I consulted the game film to answer that question. Here are five factors that stood out.

The win over the Chiefs was by far the best pass-rushing performance the Raiders have put together all season, and yet another exhibit as to why sacks are an overrated statistic.

Las Vegas tallied only three sacks on Kansas City quarterback Patrick Mahomes — to go with five hits — but harassed him on almost every drop back. Edge rushers Maxx Crosby and Clelin Ferrell had their strongest game as a duo, beating the Chiefs’ tackles off the ball consistently and forcing Mahomes into mistakes — including throwing a crucial interception to Jeff Heath late in the fourth quarter.

Mahomes’ preternatural ability to improvise allowed him to excel in spots as he still put up 340 yards and two touchdowns, but limiting him to completing 22 of 43 passes made for an overall success.

Carl Nassib contributed to some of the early pressure before getting hurt, and the Raiders will have to count on him being able to do so again on Sunday with Ferrell out after testing positive for coronavirus. Kansas City is also healthier along the offensive line coming out of a bye week, meaning defensive coordinator Paul Guenther may have to implement some new stunts and blitzes as a way for Las Vegas to keep bothering Mahomes.

It sounds banal, if not outrageous, to suggest a game with 72 points scored was won in the trenches, but the Raiders’ linemen on both sides of the ball were at least a major part of the victory.

While Mahomes’ pockets were collapsing all around him like an earthquake, it often appeared as if Carr was in an impenetrable bomb shelter. He had time to go through all of his reads and responded with a season-high 347 passing yards and three touchdowns.

Carr was only sacked once and it was for a loss of one yard on a first down in the first quarter — the opposite of a high-leverage situation.

The bad news is, like the pass-rushing prowess, this appears difficult to repeat. The Week 5 game was the healthiest the Raiders’ offensive line has been all season with tackles Trent Brown and Kolton Miller leading the way.

Like Ferrell, Brown will be out as part of the COVID-19 list in the rematch. Miller is expected to return from an ankle injury for the first time in three weeks, but he’s only managed one full practice and likely won’t be at 100 percent.

Backup tackle Sam Young has also been a staple on the injury report. If the Raiders want to block the likes of Pro Bowlers Frank Clark and Chris Jones as well as they did the first time, it will take some new players like Brandon Parker elevating their games.

3. Establish Darren Waller in the middle of the field

The Chiefs’ pass defense is most vulnerable over the middle, as it ranks 25th in the NFL by Football Outsiders’ DVOA in the category.

Las Vegas exploited the weakness in Week 5, targeting its go-to tight end five times in the first half alone. The Raiders eventually got away from Waller — who finished with a relatively pedestrian five catches for 48 yards — but their initial reliance on him, which included a couple third-down conversions, seemed to pay dividends.

With the Chiefs extra-cognizant of where Waller was at all times, other pass routes opened up. Kansas City overcommitted on Waller to allow both a 54-yard touchdown pass to Nelson Agholor and a 42-yard third-down conversion for Hunter Renfrow, for two examples.

The Raiders prefer to run their passing offense through the 6-foot-5, 204-pound Waller. It might not always be the wisest decision regardless of situation, but given the matchup with the Chiefs, it’s a valuable strategy.

The conservative nature that coach Jon Gruden has consistently applied to gameday decision-making over the last three seasons disappeared at Arrowhead Stadium. And it was all for the better.

Gruden made the third-best situational decision of Week 5, according to edjsports’ analytics, when he opted to go for a 4th-and-1 at the Kansas City 14-yard line at the end of the first quarter. The decision added 4.3% of win probability even before Carr snuck forward for a first down to prolong a drive and eventually allow the Raiders to find the end zone to go up 30-24.

Las Vegas faced a similar 4th-and-1 decision with 2 minutes to go at Kansas City’s 45-yard line, which Carr again picked up to ice the victory. Gruden said afterwards that keeping Mahomes off the field was the driving factor of his uncharacteristic aggression, and it’s not a bad reason.

The Raiders have played well enough this year to sacrifice small chunks of win probability and still beat lesser teams, but that won’t work against the Chiefs. The margins are thin facing the defending Super Bowl champions, and opponents can’t cripple themselves by making even the slightest of errors.

Finishing tackles was a big issue in back-to-back losses to the Patriots and Bills going into the Chiefs’ game, so the Raiders emphasized wrapping up and bringing ball-carriers to the ground during practice.

The result was evident against Kansas City as Las Vegas had its best tackling game of the year. On running plays, the Chiefs gained only 32 yards after contact.

The Raiders, by contrast, racked up 91 yards after contact.

Kansas City did edge Las Vegas in yards after catch — 167 to 155 — but most of that was due to coverage, not tackling, issues. The Chiefs have the most explosive offense in the NFL and are going to get their share of big plays regardless of the defense.

Opponents can’t help them and add to the total with careless mistakes. It’s something the Raiders will need to remember again this week.

Playing against the Chiefs requires implementing a complex game plan, but that can’t come at the detriment of fundamentals.