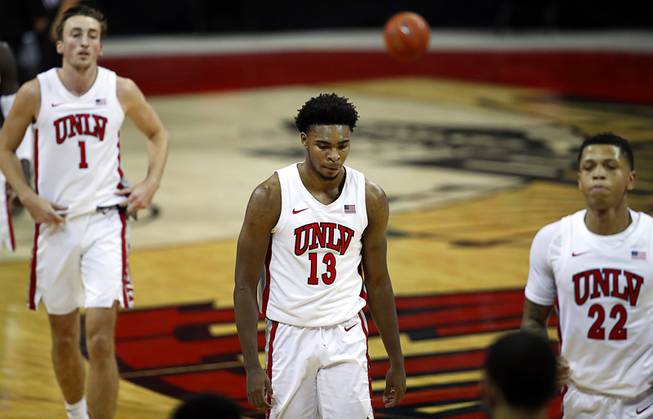 UNLV back to square one after losing opener to Montana State

Well, that was unexpected.

In a season that promises to be more than a little wacky, no sane person went as far as to predict that Montana State would come into the Thomas & Mack Center — an empty Thomas & Mack Center, but still, it’s the Mack — and push around UNLV, dropping the hosts with a 91-78 knockout punch on the opening night of the 2020-21 season. But that’s exactly what happened, and it was no fluke.

Montana State didn’t get lucky or take any shortcuts to its dominant win. The Bobcats drew charges, rebounded, cut away from the ball for layups, made the extra pass and executed as a team. UNLV did none of that. It was a choppy, disconnected performance from a team that was supposed to be — and, to be fair, still could be — a Mountain West contender this year.

Dreams of contention are a long way off, however. Right now UNLV has more pressing concerns, like finding defensive players who can stay in front of ball-handlers. T.J. Otzelberger opened the game with a four-guard lineup, and Montana State had little trouble carving it up with inside-out passing and dribble penetration.

“We didn’t do the job guarding the basketball at all,” Otzelberger said. “We wanted to dictate tempo, pick up full court, try to speed up the game. We didn’t pressure the ball the way we needed to. Then in the halfcourt, a lot of times later in possessions we broke down and one of our guys would just need to sit down and guard the dribble, and they were able to get to the basket and make plays. I do think guarding the basketball was the biggest issue or challenge for us defensively, for sure.”

Bishop executed a drive-and-kick to teammate Tyler Patterson for 3 midway through the first half, and Kellen Tynes drove through the UNLV defense for a layup on the following possession to give Montana State an early 24-14 lead. The Bobcats stretched it to an 18-point margin at the half and went into the locker room with a 49-31 advantage. UNLV allowed the visitors to shoot 62.1 percent over the first 20 minutes.

If fans had been inside the arena they would have been stunned by the carnage, and booing would have occurred. Instead, UNLV jogged into the tunnel in silence.

The much-anticipated 1-2 punch of junior wings Bryce Hamilton and David Jenkins turned out to be a one-man show, as Jenkins was held to just seven points on 2-of-9 shooting in his UNLV debut. The former South Dakota State star struggled to create separation via the dribble or away from the ball; most of his attempts were heavily contested. Hamilton poured in 27 points in 39 minutes, but a large chunk of that production came during garbage time, long after the game had been decided.

Jenkins and Hamilton were unable to keep up defensively, which was a theme. Otzelberger shuffled various lineup combinations throughout the game, exclusively using four- and five-guard alignments, but none were quick enough or determined enough to stop penetration. Montana State finished with an advantage of 38-18 on points in the paint.

Coleman said that UNLV cannot use its size as an excuse for getting hammered on the interior.

“Huge point of emphasis,” Coleman said. “It’s something that we talk about a lot. We’re not a 6-foot-8, 6-foot-7, 7-foot team. We’ve got a lot of small guards, so we’ve got to do a better job being more physical and not letting it in. We’ve got to have good hand pressure and ball pressure on the ball so they can’t just zip passes in there.”

If there were any bright spots for UNLV it was the play of sophomore guard Caleb Grill and freshman wing Nick Blake. Grill hit three 3-pointers, scored 13 points and seemed to be the only player capable of staying in front of ball-handlers on defense. Blake connected on 5-of-7 from deep and dropped 16 points in 22 minutes off the bench.

The shooting of Blake and Grill powered a couple of mini-spurts in the second half, but they never got UNLV closer than 14 points until the final minute.

It was a severe beating from beginning to end, and one that has UNLV reconsidering everything after just one game.

Though the roster has changed, Otzelberger expected his team to resemble the one that finished last season on a hot streak by playing his brand of basketball. Instead it looks like he’ll have to coach up this squad from square one all over again — which was not part of the plan.

“It was definitely disappointing,” Otzelberger said. “I think the momentum we had at the conclusion of last season, I thought would hopefully propel us into the offseason where our guys understood the standard level of play and how we have to compete in everything that we do … I was a little bit surprised that we weren’t where we need to be in that category.”

UNLV has a few days to figure out what went so wrong in the opener, and then the team will head to Asheville, N.C., for the relocated Maui Invitational. They’ll face No. 16 North Carolina on Monday, and then play two more games in “Maui” before heading to play at Kansas State on Dec. 5.

It’s a tough schedule that will require UNLV to play with more toughness than we saw in Wednesday’s loss.

Live blog: UNLV blown out by Montana State in opener