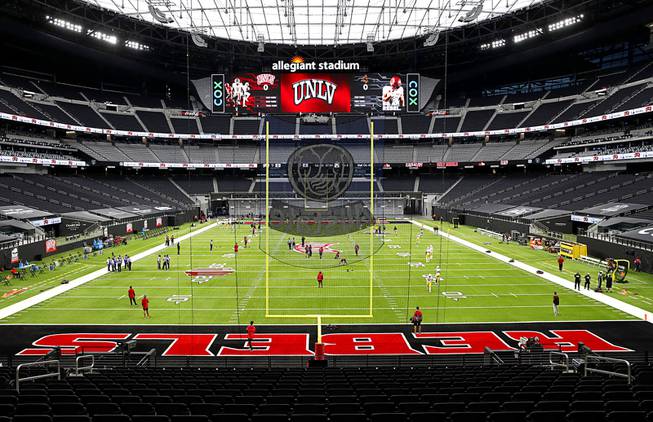 Live blog: Gilliam out, Brumfield in as UNLV trails Wyoming, 10-0

A view of the field before the UNLV Rebel’s game against the Wyoming Cowboys at Allegiant Stadium Friday, Nov. 27, 2020.

The early fireworks have died down and this has turned into a defensive struggle, as the last four drives have ended in punts. Heading into the second quarter, Wyoming still has a 10-0 lead.

UNLV’s offensive struggles (just 1.1 yards per play in the first quarter) led Marcus Arroyo to yank starting quarterback Max Gilliam and send in freshman Doug Brumfield. The young lefty did not provide much of a spark, however, as he missed on his one pass attempt and UNLV went 3-and-out.

Wyoming just punted again, however, and Brumfield is back in the offensive huddle during the timeout so it appears he will get at least another drive to show what he’s got.

It didn’t take long for Wyoming to get on the board, as running back Xazavian Valladay took a handoff on the second play of the game and raced 78 yards untouched up the middle to give the Cowboys a 7-0 lead.

After a UNLV punt, Wyoming drove 54 yards an added a 36-yard field goal to make it 10-0 in favor of the visitors.

UNLV’s defense has simply gotten blown off the ball, leaving huge running lanes. Only a superb run stop on second down by linebacker Jacoby Windmon salvaged the last drive, as he single-handedly forced Wyoming into a 3rd-and-long passing situation (quarterback Levi Williams threw incomplete, resulting in the field goal). Unless UNLV can put up more of a fight in the trenches, Wyoming is going to run wild.

Offensively, Max Gilliam got the start at quarterback but couldn’t get anything going on the first drive. He completed 1-of-3 passes for five yards, and UNLV’s only first down came via penalty. Let’s see how long Marcus Arroyo waits before sending in Justin Rogers.

Time is running out on the 2020 season, so if UNLV football is planning to win a game this year they’d better act fast.

Friday’s home contest against Wyoming (1 p.m., Fox Sports 1) may represent the best chance for a victory in Marcus Arroyo’s first season at the helm. The Cowboys are 1-2, and their last two games were canceled due to COVID-19, so they might not exactly be game-ready.

Three keys to watch as UNLV looks to notch its first victory:

It feels odd to say this with three games left on the schedule, but UNLV’s season-long quarterback competition will continue today. Senior Max Gilliam is likely to start, with sophomore Justin Rogers set to come off the bench for a significant amount of snaps.

Rogers clearly looked more promising in UNLV’s most recent game, a 34-17 loss at San Jose State, but Gilliam might still represent the best chance to win in the present and Arroyo really does not want to go winless in his first year as a head coach.

Assuming UNLV has a full complement of healthy, COVID-free receivers, it would be nice to see what Rogers can do while throwing to Steve Jenkins and Kyle Williams for an extended period.

The quarterback situation is the most visible, but there is also a burgeoning youth movement on defense. Two of the team’s most heralded recruits — linebackers Brennon Scott and LeShaun Bell — have played sparingly to this point, but Arroyo hinted before the Colorado State game (which got canceled) that he planned to give them more snaps in order to assess their development.

Expect Arroyo to follow through on that plan today. One of the only bright spots of this season has been the play of linebacker Jacoby Windmon and defensive end Adam Plant, both sophomores. If Scott and Bell can get on the field over the final three games and show some flashes, it will at least give fans a reason to believe Arroyo is building a competitive defense for 2021.

There are just two games left on the schedule after today: a home date against conference power Boise State and a road trip to Hawaii, so you can do the math. If UNLV loses this game against Wyoming, a winless season is very much on the table.

Will we see Arroyo coach any differently if UNLV is competitive this afternoon and the game is undecided in the second half? Will he maybe go for it on a fourth down when he would normally punt? Will he stick with Charles Williams and the running game longer? Will he call for a more conservative defensive scheme? Will he pull back the reins on younger players and go with veterans? It’s a delicate situation, balancing development against the specter of a giant “zero” in the win column, so we’ll have to wait and see how Arroyo plays it.

UNLV falls to Wyoming as possibility of winless season looms

College football by the odds: Vegas picks and preview of every Week 13 game