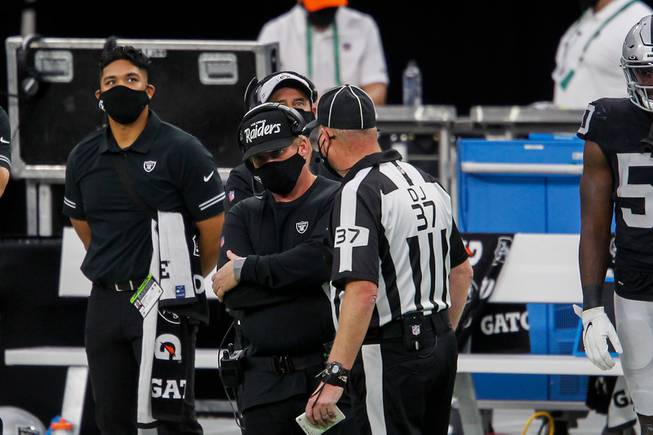 Angry for the birds: Raiders in foul mood after loss as they travel to take on Falcons

Las Vegas Raiders head coach Jon Gruden speaks with down judge Jim Howey during a play revision in the second half of their game against the Buffalo Bills at Allegiant Stadium Sunday, Oct. 4, 2020.

The Raiders coach has sported his trademark scowl in every media Zoom call since last Sunday’s 35-31 loss to the Chiefs and has proven a bit irritable. Asked for his favorite Thanksgiving dish, Gruden was in no mood.

Gruden’s temperament has extended throughout the Raiders’ Henderson headquarters as they go into a 10 a.m. kickoff Sunday morning against the Falcons in Atlanta. The cliché is that a team feels down after losing a close game to a rival like Las Vegas did to Kansas City last week.

Not right now with the Raiders though. To a man, they’ve cited anger as their foremost emotion as they cling to a playoff spot at 6-4 with six games to go in the regular season.

All the rage stems from the Chiefs’ final drive last Sunday, when Patrick Mahomes hit Travis Kelce with a 22-yard touchdown pass to narrowly prevent losing to the Raiders for the second time this season. Las Vegas thought it did enough to win the game and wishes the final touchdown was a play it could have back, according to safety Johnathan Abram.

It was Abram’s blown assignment that left Kelce wide open in the end zone, but he’s followed his teammates’ lead and resisted blaming himself too much for the breakdown.

“We didn’t talk about it more than any other play,” Abram said. “It’s just a correction that we came in on Monday and fixed. The one thing I learned from it is, you can come in and do your job the entire game and the one play you don’t do your job, it shows up. It just happened to show up in a critical moment of the game.”

With a victory, the Raiders would have been in position to challenge the Chiefs for their first AFC West title in 18 years. Now they’re back in the same position they were in a year ago, needing a strong finish to get into the playoffs.

They couldn’t build on their 6-4 start a year ago, dropping four straight games including a humiliating 34-3 defeat on the road against the New York Jets in Week 12. The Raiders had won three straight games going into that contest, however, and Guenther said victories sometime result in “feeling good and missing a little detail here or there.”

There are several reasons Las Vegas believes this season is different, but the fire following the loss to Kansas City is certainly a factor.

“We feel like as an organization, talent-wise, we’re getting better,” offensive coordinator Greg Olson said. “We like where we’re at. We are pissed about (the Chiefs’ loss). We felt it was one that got away from us.”

The loss ultimately was the result of a mistake or two, which is surely part of the reason Gruden has ramped up his intensity. The Raiders no longer have any cushion and another close loss like the Chiefs dealt them could deny them an opportunity to win their first playoff game since 2002.

“We have to play a lot better because Atlanta, the team we’re about to play, is capable of doing the same thing,” Gruden said.

Gruden’s sternness rubbed off on his team, but not everyone has been as consistently irked as their head coach. Abram, for instance, jumped at the chance to talk about his perspective on Thanksgiving.

UNLV falls to Wyoming as possibility of winless season looms