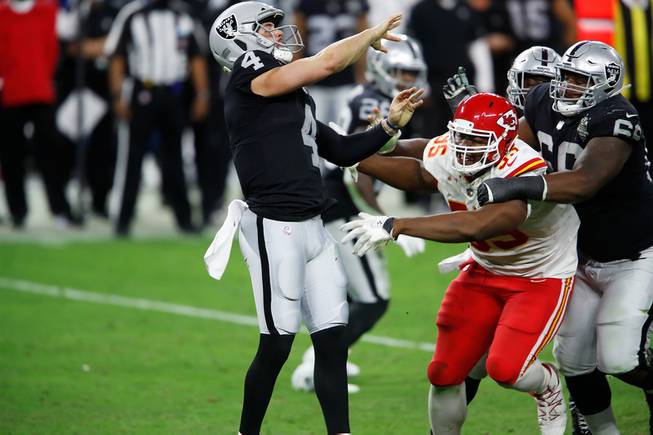 Las Vegas Raiders quarterback Derek Carr (4) passes under pressure during the second half of their game against the Kansas City Chiefs at Allegiant Stadium Sunday, Nov. 22, 2020.

• Where: Mercedes-Benz Stadium in Atlanta

A devastating 35-31 loss to the Kansas City Chiefs last week leaves the Raiders in a familiar position. For the second straight year, they’re 6-4 with six games to go and need a strong finish to the regular season to secure a playoff spot. Last season, this is when things started to unravel. The Raiders lost four straight including getting blown out by a combined score of 74-12 in back-to-back road games in Week 12 and Week 13. They look like a better team this season — their point differential is currently +10 as opposed to -25 at this point a year ago — but even the best teams sometimes have a tough time bouncing back from a defeat as emotional as last week’s was against Kansas City. Las Vegas can’t afford to dwell if it wants to get back into the playoffs for the first time since the 2016-2017 season.

It could be a memorable homecoming for the Raiders’ sixth-year tight end who grew up in nearby Kennesaw, Ga., before attending Georgia Tech less than two miles away from Mercedes-Benz Stadium. The Falcons have been the worst team in the league against tight ends this season by Football Outsiders’ DVOA ratings. Opposing tight ends average six receptions and 62 yards per game against Atlanta, and that’s despite not facing one as prolific as Waller yet. Waller sits second in the NFL — behind Kansas City’s Travis Kelce — with 84 receptions and 519 receiving yards on the year. Atlanta did show some progress last week, holding New Orleans’ tight ends to two catches for 25 yards in a 24-9 loss. If the Falcons can’t continue in that direction, they should expect the Raiders to make use of the ample portion of their playbook where Waller is the first read for quarterback Derek Carr.

• “They’re 3-7; that’s a joke. That’s the best 3-7 team I’ve ever seen. I don’t know how they lost some of these games. I’m sure they don’t know either.” -Gruden on the Falcons and their string of baffling endgame collapses this season

• “That’s one we all wanted, one we can’t get back. We’ve just got to go forward this week, each and every week going forward, to make sure we do our part to get to face those guys again.” -Safety Johnathan Abram on losing to the Chiefs

• “They’re pissed about it, the record we have right now. We should be better and that’s a good feeling to have as a coaching staff and certainly for our players to feel that.” -Offensive coordinator Greg Olson on how the Raiders responded to last week’s loss

If Falcons linebacker Foyesade Oluokun ever needs an outsider to speak on his behalf as a player, he should seek out Raiders coach Jon Gruden. Unprompted this week, Gruden gushed over Oluokun and said he might be the best linebacker Las Vegas has faced all year. Not bad for a 2018 sixth-round NFL Draft pick out of Yale. Oluokun leads Atlanta in tackles and has become the centerpiece of a resurgent run defense. The Falcons were a sieve on the ground a year ago, but with Oluokun’s emergence, fellow linebacker Deion Jones’ health and Pro Bowl defensive tackle Grady Jarrett’s leverage, they’ve been stingy this season. Atlanta rates 10th against the run in the league by DVOA. Las Vegas likes to let running back Josh Jacobs set the tone early, especially in road games, but it may be more difficult than normal in Atlanta.

After a near-flawless passing performance against the Chiefs, Carr finally started getting some of the widespread acclaim he’s earned by leading one of the NFL’s best offenses this season. Gruden is next in line to receive public plaudits, if not outright apologies. In his third season since rejoining the Raiders, Gruden has built an offense he’s always envisioned, an offense that most predicted he’d be incapable of heading after nine years as a television personality. Gruden’s playcalling has been as lethal as Carr’s arm, imbuing Las Vegas with a weekly rhythm that other teams rarely find. The Falcons likely have more offensive talent than the Raiders, but they too often look like a discombobulated mess. The Raiders rarely do, and Gruden’s direction might be the single biggest reason why.

Straight games since Pro Bowl center Rodney Hudson has allowed a sack, dating back to Week 17 of the 2017 season. Las Vegas has one of the best pass-blocking offensive lines in the NFL, and it starts in the middle with Hudson. Carr hasn’t been sacked in 10 straight quarters this season either, a phenomenal stretch considering Las Vegas has been playing with makeshift lines virtually every week due to injury. Hudson and right guard Gabe Jackson have been the only constants that have started in every game. Some may gloss over the importance of a center like Hudson, but Carr certainly doesn’t. “Every time I see the COVID doctor walking around here, I always ask him, ‘Is Rodney OK?’ He’s walking around telling people, ‘Contact, you’re too close.’ I’m like, ‘Well, just make sure Rodney is not by anybody, alright?’”

It was no anomaly that 11 different players caught a pass last week against the Chiefs. The Raiders’ receiving options run deep and no one outside of Waller is going to see a consistent stream of targets every game. And that’s coming straight from Carr, who routinely says some version of, “It’s going to be someone different each week.” Last week was Agholor’s time as he hauled in six catches for 88 yards. But he’s only had more than 3.5 receptions in a game on two other occasions this season. His yardage total also looks high this week at 46.5, but he’s been such a big-play threat that it’s probably safer to go under on receptions. Heed Carr’s words and look for someone else to be his favorite receiver against the Falcons.