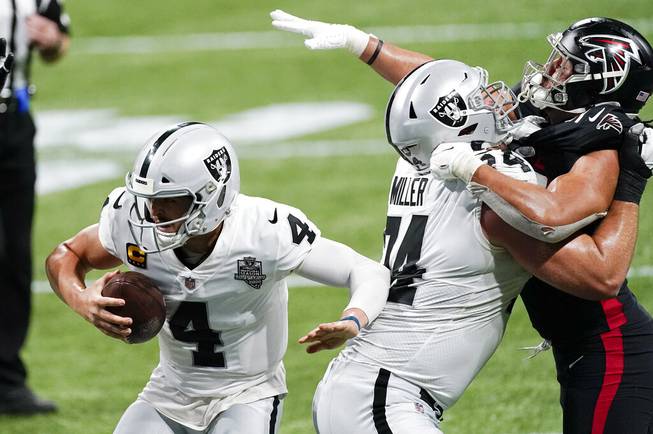 Raiders implode, halt progress with no-show against the Falcons

Las Vegas Raiders quarterback Derek Carr (4) works in the pocket against the Atlanta Falcons during the second half of an NFL football game, Sunday, Nov. 29, 2020, in Atlanta.

His mask slipping down his face as he shook his head, Raiders coach Jon Gruden stood slouched to his side around midfield with his arms crossed at Mercedes-Benz Stadium Sunday afternoon.

A lost fumble late in the first half to kill a Raiders’ drive caused Gruden to express his incredulity with the stance, but he might as well have just stayed in the posture for the rest of the game. Frustration and confusion were the only way to respond to the 43-6 stomping Atlanta inflicted upon Las Vegas.

“I apologize to the Raider Nation and really compliment the Falcons,” Gruden said. “They played a hell of a football game, and we did not. The turnovers and penalties are inexcusable and those are a reflection of me. We’re a lot better football team than that.”

A season-high five turnovers and 11 penalties contributed to the Raiders undoing a great deal of positive momentum they had built on the season. Las Vegas came in off of a loss to Kansas City but the way it challenged the defending Super Bowl champions had the football world taking it seriously as an above-average team sitting in a playoff spot.

The Raiders have neither the standing nor the respect after allowing what had been a mistake-prone Falcons’ team to trounce them. They fall to 6-5 on the year, a win out of the postseason picture, going into a game at the New York Jets next week.

“It’s one of those where you want to watch it, correct it and burn the film,” quarterback Derek Carr said, “because that’s not who we are.”

Carr, and by extension, the offense, might have put on the most inexplicable performance of all. Losing to a still-dangerous Falcons team is no shock; doing so while being unable to score or even hold onto the ball goes against everything the Raiders had established on the year.

Through 10 games, Las Vegas had been consistently shaky on defense, but steady to extraordinary on offense. If anything, against the Falcons, it was the opposite.

The Raiders’ defense kept them competitive early by holding to the Falcons to a pair of field goals despite the offense giving away field position on the first two drives. Josh Jacobs was stuffed on a 4th-and-1 play near midfield on the Raiders’ first possession, and then Carr committed his first of three fumbles on the second.

“We were supposed to come out here and put our anger on the Falcons and I feel like we didn’t do that,” safety Johnathan Abram said. “We kind of had a pity party for ourselves.”

Down 6-0, Abram managed one of the only highlights for the Raiders’ on the day when he made a diving interception off of a Matt Ryan pass that deflected off of intended receiver Hayden Hurst at the 43-yard line.

Rookie receiver Henry Ruggs made one of his best plays of the season to ensure Abram’s pick wasn’t in vain, leaping to catch a 4th-and-3 pass from Carr along the sideline. But two ensuing penalties including one by right tackle Brandon Parker, who also allowed two strip-sacks on Carr in the game, kept the Raiders out of the end zone.

They appeared fortunate to even come out of the sequence with three points from kicker Daniel Carlson as replay overturned a fumble call by Josh Jacobs that otherwise would have given them six turnovers on the day.

“The issues were everywhere,” Gruden said. “There are plenty of excuses, but I credit Atlanta.”

Another penalty, roughing the kicker on Dallin Leavitt, directly led to Atlanta’s first touchdown. Matt Ryan hit Calvin Ridley with a 4-yard touchdown pass in the back of the end zone on a fourth-down play to make the score 13-3, and even if the Raiders didn’t know it yet, the blowout was underway.

Carr committed his second fumble, the one that got such a reaction out of Gruden, afterwards, a precursor to three more Raiders’ giveaways on their next four possessions including a 67-yard interception return by Falcons linebacker Deion Jones. Falcons linebacker Steven Means claimed Carr’s final fumble with a strip-sack in the fourth quarter.

“I saw him on the first (fumble) and I should have pulled it down to my chest, bad play by me on the first one,” Carr said. “The other two, I’ve got to get the ball out quicker. I’ve got to do a better job of stepping up and make my read happen quicker.”

Jacobs had the one non-Carr turnover and was a nonfactor for most of the day with 27 rushing yards on seven carries. He appeared to hurt his ankle after his third-quarter fumble and did not return to the game.

Other injuries piled up as both starting cornerbacks Trayvon Mullen and Damon Arnette missed time, though the former did come back to finish the game.

The potential of players missing time is going to make it more difficult for the Raiders to bounce back and prevent a late-season swoon after a 6-4 start for the second straight year. Even after the loss, the Raiders vocally maintained they’re a better team than a season ago and won’t fall into a similar trap.

That may be true, but few outside of the locker room are likely to believe it after the way the Falcons’ game went. The onus is now on the Raiders to prove it.

“We control our own destiny, we really do,” receiver Hunter Renfrow said. “It would be one thing if I was scared of the guys we had in the room and didn’t know if they were going to fold when things got tough. But that’s not us, so it’s flush it and have a good week next week.”