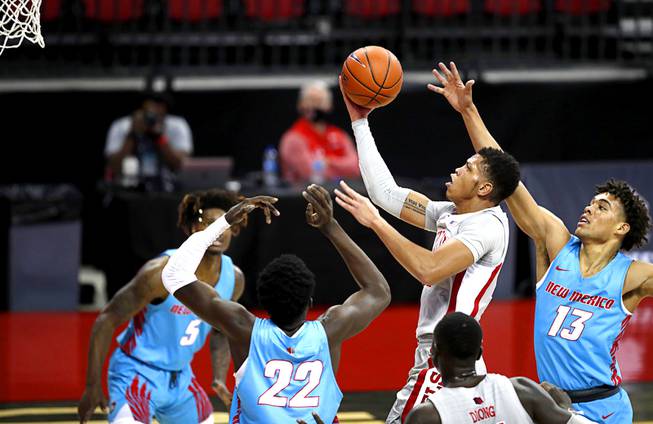 Nick Blake steps up in UNLV win over New Mexico

UNLV Rebels guard Nick Blake (22) drives to the basket during a game against the New Mexico Lobos at the Thomas & Mack Center Saturday, Jan. 16, 2021.

UNLV got a glimpse of its future on Saturday, and it looked like a four-wing lineup commandeered by a freshman. And it just might work.

The day started with the unfortunate news that starting point guard Marvin Coleman will miss the rest of the season due to a stress fracture in his right leg, and it ended with an eye-opening 77-54 win over New Mexico. In between, head coach T.J. Otzelberger may have figured out how to fill the void left by Coleman’s absence.

The breakout performance came courtesy of Nick Blake, who came off the bench but served as the team’s primary ball-handler during the 25 minutes he was on the floor. The 6-foot-6 guard scored 18 points and generally breathed life into UNLV’s four-guard attack with his forays to the rim and his 3-point shooting. For the game, Blake connected on 7-of-13 from the field and 4-of-8 from 3-point range while dishing out three assists.

If that’s a preview of what Blake can bring to the table the rest of the way, his playing time will only increase over the final 13 games of the season.

Otzelberger certainly sounded like a big fan after the game, praising Blake’s work ethic and attitude in seizing the moment.

“I loved how Nick Blake played,” Otzelberger said. “His confidence is growing. He hasn’t had the summer, with everything that’s going on we haven’t had the time in the gym with him, so we’re a little bit behind where we’d like to be but you see him making his climb. He is in the gym early every morning before everybody else. He puts in time after practice every day, and because of those habits you can see him making his climb. You can see the growth.”

UNLV is now 3-6 overall and 1-2 in Mountain West play, with another home game against New Mexico set for Monday.

Blake got plenty of help along the way, and UNLV operated with a comfortable margin for most of the afternoon. Caleb Grill and David Jenkins nailed back-to-back 3-pointers in the opening minutes to give the home team a 9-2 lead, forcing New Mexico coach Paul Weir to call timeout. It didn’t help. Bryce Hamilton scored on a pair of drives, and when Grill popped in another 3 from the left wing, it increased UNLV’s lead to 15-4 just six minutes into the game.

On the defensive end, UNLV made New Mexico look like a team has had limited practice time while being forced to play on the road for the entire season (both of which are true). The Lobos committed turnovers on four of their first 10 possessions and finished the first half shooting 35.7 percent. That allowed UNLV to head into the break with a 37-26 advantage, and New Mexico never got as close as single digits the rest of the way.

With Blake bringing the ball up court and initiating UNLV’s halfcourt offense (with help from starting guard David Jenkins), the scarlet and gray shot 50.9 percent from the field and scored a healthy 1.20 points per possession. Junior wing Bryce Hamilton played a superb all-around game and finished with 19 points, eight rebounds and a career-high seven assists. Center Mbacke Diong was the main beneficiary of UNLV’s ball movement, as he converted 9-of-11 from the field (the one miss was a 3-pointer) and led the team with a career-high 20 points.

Otzelberger said Blake and Jenkins did a commendable job of filling in for Coleman as the quarterbacks of the offense.

“Obviously the point guard position probably isn’t David Jenkins’ natural position or Nick Blake’s,” Otzelberger said, “but both are in different ways handling that spot well for us and helping us to run offense efficiently and move the basketball.”

Blake came to UNLV in the offseason as the headliner of the program’s 2020 recruiting class because of his size and versatility on the wing. Known mostly for his slashing and shooting as a prep player, he credited Coleman’s mentorship for helping him get acclimated to the college game.

Some of the wisdom Coleman dispensed, according to Blake: Don’t get caught in the air on offense, use all of his lanky, 6-foot-6 frame on defense, and most importantly, maintain composure at all times.

“A mantra for Marvin was never getting too high, never getting too low and always staying poised,” Blake said. “He was put into the point guard position last year just like I was now, so there’s no better person to learn from than Marvin for things like that.”

Blake is now averaging 7.3 points on the season while knocking down 37.9 percent of his 3-pointers. He’s still very inexperienced at the Division I level, having logged just 154 total minutes in his collegiate career, and there are going to be ups and downs, especially as UNLV leans on him more and opposing teams pay increased attention to him in their scouting reports. But with Coleman, the team’s heart and soul, no longer available, UNLV is going to need someone to step up and replace what was lost.

“Marvin is our leader, he’s a captain, he’s our point guard,” Blake said. “I have to go out there real poised, knowing that I have to take on a lot. I have to be able to move the ball, get into the paint, rebound, defend, score for us, everything. Just being a coach on the floor and continuing what he was doing before he went down.”