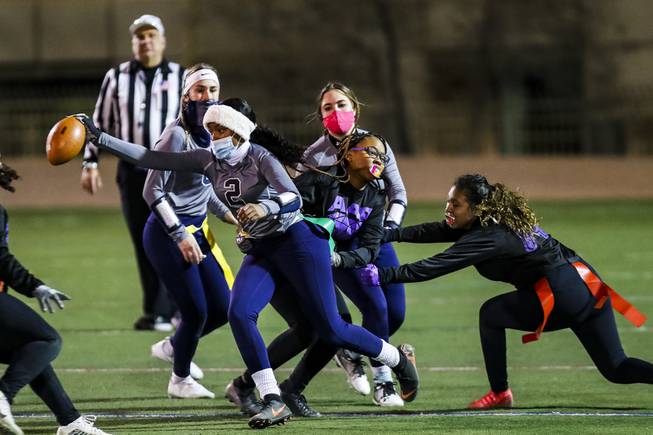 A player from the Southern Range Warhorse junior varsity team runs the ball during a flag football tournament at All American Park, Monday, Jan. 11, 2021.

When it was determined that the high school girls’ flag football season this winter would be canceled because of the pandemic, Shadow Ridge High coach Matt Nighswonger immediately got on the phone to contact his players.

They had been mostly apart since the outset of the pandemic last year, but were hopeful that practice and games would resume. Delivering the news was painful, and “many of the girls, especially the seniors, were emotional,” Nighswonger said.

There’s still a chance that prep sports traditionally contested in the fall and spring seasons will be played with truncated schedules when school resumes in person, but the winter sports of basketball, bowling, girls’ flag football and wrestling were casualties.

Those sports were proposed for early January, and there’s simply not enough weeks remaining in the school year to squeeze in all three seasons.

But Nighswonger and his coaching colleagues came up with an alternative solution in a 10-game club season, which started last week at All American Park in northwest Las Vegas and features about 250 girls. Players wear face coverings on the bench (and some do on the field), and social distancing standards are stressed.

“It felt like the first real thing we’ve done in 10 months,” Nighswonger said of the games.

Club sports played outdoors are permitted to be contested at this stage of the state’s reopening, which gave the coaches the green light to launch their league. It has no affiliation with the high school, meaning the Shadow Ridge Mustangs are called the Southern Range Warhorse — same school color and mascot concept, but distinctly different.

The league is about more than winning and losing. It is also a celebration of competition for the area’s small but dedicated girls’ flag football community. The sport started in 2012 in the Clark County School District and has become so popular that it’s contested on varsity, junior varsity and freshman ranks.

Flag football is also in its infancy at the collegiate level, with about 20 NAIA universities beginning programs and awarding scholarship money. Shadow Ridge senior Kenzie Murdoch will play at Cottey College in Missouri, for instance.

The need to get game experience and highlight film for potential college opportunities was another reason for starting the club league, Nighswonger said. But, he stresses, that was a secondary concern.

What is most important is the well-being of the teenagers. After months of being away from friends because of remote learning, having a team to be part of was invaluable for the mental health of the players, the coach said. Some desperately needed the recreation of attempting to score a touchdown.

Others needed that fist-bump after a good play, postgame talk and good laugh. Mask on or off, simply competing was exactly what hundreds of Las Vegas-area girls needed to return a smile to their faces for a few hours.

“The kids are saying that practice is their favorite part of the day and week,” Nighswonger said.