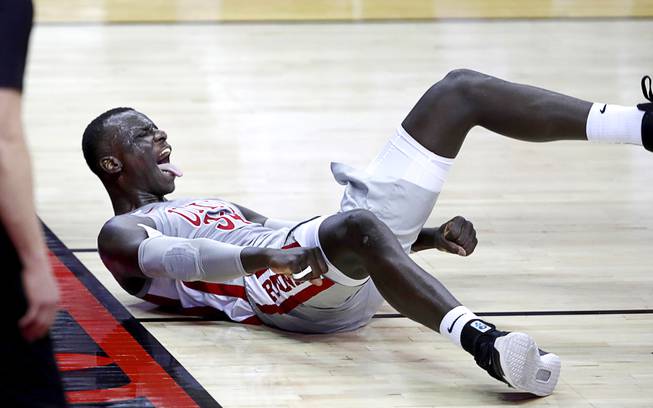 UNLV Rebels forward Cheikh Mbacke Diong (34) celebrates after making a basket and drawing a foul during a game against the New Mexico Lobos at the Thomas & Mack Center Saturday, Jan. 16, 2021.

On Saturday, Mbacke Diong scored a career-high 20 points to lead UNLV to a rousing win over New Mexico.

Two days later, the senior center played 32 minutes in the return game and attempted just one shot. Some players might have been bothered by such a drastic reduction in their offensive involvement, but Diong happily focused his efforts on the other end of the floor and made winning plays on defense to usher UNLV to an unsightly 53-46 victory.

Taken together, the two games paint an accurate portrait of what Diong is bringing to the table in his fourth year in the program.

“You can’t say enough positive things about him,” UNLV coach T.J. Otzelberger said, “because there’s not many guys that are as low ego as he is that don’t touch the basketball and still do all the things that he does to make a team win.”

The game itself was a true rock fight — “Probably one of the uglier college basketball games, if not the ugliest one I’ve ever been a part of,” according to Otzelberger — and the less said about it the better. But after approximately 37 minutes of the teams alternating bricks and turnovers, UNLV edged ahead and Diong took it as his personal responsibility to protect the lead.

With less than a minute on the clock, UNLV had a 50-46 advantage but New Mexico forward Makuach Maluach was able to penetrate the defense and get into the paint. Diong alertly left his own man and slid over to play help defense; Diong’s perfectly timed shift pinned Maluach under the basket and forced him to attempt a pass through the congested lane. UNLV guard Caleb Grill was there to pick it off.

True to UNLV’s shooting touch the entire night, Grill missed the front end of his 1-and-1 and New Mexico took off the other way. Lobos guard Saquan Singleton eyed Diong in transition and decided to take it right at the big man. Diong stood his ground and maintained his verticality, jumping straight in the air and forcing Singleton to miss his layup attempt with 25 seconds remaining.

Nick Blake cleaned up the rebound on that play and knocked down the ensuing free throws to seal the win.

Neither defensive play ended up in the box score for Diong, but Otzelberger took note of his center’s propensity for making things difficult on opposing scorers.

“Mbacke has done so much to protect the rim and make sure that guys don’t get easy baskets, easy 2-point field goals,” Otzelberger said.

For the game UNLV held New Mexico to 34.7 percent from the field, and the Diong-led defense really clamped down in the second half, limiting the Lobos to 5-of-25 shooting.

Diong finished with six points, 10 rebounds, one steal, and most importantly, one win.

“We got our stops and then found a way to win,” Diong said.

On the offensive end, UNLV has Hamilton to thank for delivering just enough buckets to avoid an embarrassing loss to a New Mexico squad that is now 0-8 in Mountain West play (4-8 overall). The junior guard tallied 14 points, with eight of those coming in the final five minutes.

Hamilton swooped through the lane for a layup to give UNLV a 44-42 lead with 4:44 to play, then buried an elbow jumper a minute later to make it 46-42. Back to back floaters by Hamilton extended the lead to 50-43 with two minutes left, and from there it was just a matter of getting stops against an opponent that couldn’t shoot straight to begin with.

Diong made sure the lead held.

The scarlet and gray are now 4-6 on the season and 2-2 in the Mountain West. They’ve won three straight and will make it four on Thursday, when NAIA opponent Benedictine Mesa visits the Thomas & Mack Center. Then UNLV will be in for a real test, as first-place Utah State (11-3, 8-0 MWC) will come to Las Vegas for a two-game series on Jan. 25 and 27.