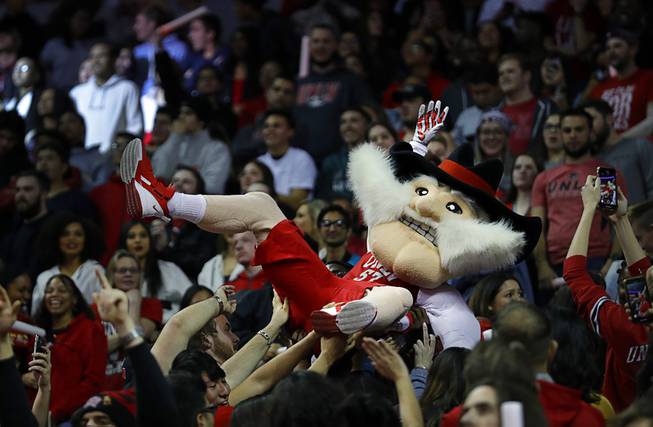 UNLV mascot Hey Reb is carried by fans during a game against UNR at the Thomas & Mack Center Wednesday, Feb. 12, 2020.

UNLV will no longer use the Hey Reb! mascot for its sports teams but will continue to use the Rebels nickname.

University President Keith Whitfield said in a statement that he finds no issue with the nickname, which at one point in the school’s history represented a Confederate soldier.

“I was drawn to lead this great university because I identified with its spirit, determination and daring style,” Whitfield said. “Rebels are not afraid to fail and create a new path when one doesn’t exist. For all these reasons and many more, we will continue to be known as ‘Rebels.’”

The Rebels moniker and the cartoonish Hey Reb! mascot have drawn criticism for their perceived allusion by some to slavery and the Confederacy. Opponents of the Hey Reb! statue had been working since 2017 to get the university administration to address the issue. A petition that circulated in the summer drew significant public attention, and on June 16, interim UNLV President Marta Meana had the statue removed from campus.

The twin histories of UNLV’s name and mascot are long, complicated and questionable.

UNLV named itself the Rebels in the 1950s, ostensibly to highlight the new school’s “rebellion” against Northern Nevada and UNR. The nickname took on a more political slant in the 1960s when the sports programs adopted a mascot that was a wolf (named Beauregard, after Confederate general P.G.T. Beauregard) dressed in the gray uniform of a Confederate soldier. For the 1968 season, the UNLV football team wore helmets that featured the Confederate battle flag.

UNLV got rid of the Confederate logos in 1976 after Black students protested, but the school kept the Rebels nickname, transitioning from Beauregard the wolf to a more colonial version of a Rebel. The Hey Reb! mascot was introduced in 1983 and was meant to depict a mountain man or a frontiersman.

Whitfield said the removal of the statue from campus in June was the practical end of the Hey Reb! mascot and that his decision essentially served as a confirmation.

“Since that time, and even before my arrival, the university stopped using the mascot in the traditional areas of student recruitment and athletics,” Whitfield said. “For all intents and purposes, the Hey Reb! mascot has been retired since last spring and there are no plans to bring it back.”

Whitfield also said the school does not plan to commission a new mascot.