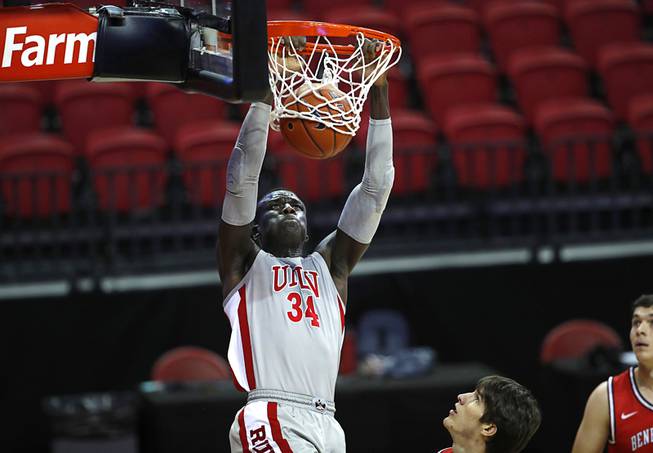 The final buzzer just sounded, and thankfully it’ll be all Mountain West games for UNLV the rest of the way after they trampled NAIA Benedictine Mesa, 99-45.

The stats are beside the point: Mbacke Diong got a career high with 22 points, David Jenkins gained some confidence with a 20-point outing, and Nick Blake looked very comfortable in his first game as the de facto starting point guard, posting 15 points and seven assists. But in the context of a game in which UNLV led by 60 points for a while, it’s hard to be too impressed by individual numbers.

T.J. Otzelberger will probably be more happy with the defense his team played, as they seemed to give pretty close to full effort for most of the 40 minutes. Benedictine Mesa went nearly 14 minutes before notching its second bucket of the second half, and the Redhawks finished the game shooting 21.7 percent.

Now UNLV can put these quasi-exhibitions behind them and focus on the real games, with first-place Utah State coming to the Mack on Monday.

There’s not a lot of X’s and O’s analysis to be had here. UNLV is just bigger, stronger, faster and a much better shooting team than Benedictine Mesa. T.J. Otzelberger has to be happy seeing his team knock down 7-of-14 from beyond the arc so far; the main goal now has to be carrying that momentum over to Monday’s game against Utah State.

Mbacke Diong and David Jenkins continue to fill it up, as they’ve got 20 points apiece. That ties a career high for Diong, who set that mark just days ago against New Mexico.

Nick Blake has 11 points and six assists in his first career start.

UNLV doubles up Benedictine Mesa at half, 50-25

Mbacke Diong and David Jenkins combined to outscore Benedictine Mesa in the first half, and UNLV is going into the locker room with a 50-25 lead.

Diong and Jenkins scored 13 points apiece, with Diong making 6-of-11 inside the paint while Jenkins has knocked down 3-of-4 from beyond the arc. As a team, UNLV is shooting 50 percent from the field (21-of-52) while holding Benedictine Mesa to 22.5 percent from the floor (9-of-40).

Freshman Nick Blake scored nine points in the half on 4-of-9 shooting, and he has also dished out a game-high four assists.

UNLV jumped out to a 23-2 lead over Benedictine Mesa, and midway through the first half the only questions remaining are how long the starters will play and how many personal career highs will be broken tonight.

Mbacke Diong looks like a good bet to top his high of 20 points set just last week, as he scored nine of UNLV’s first 11 points. Nick Blake, who started in place of Bryce Hamilton, also has a quick seven points and it looks like the freshman will sail past his career high of 18.

Bryce Hamilton out for UNLV

As most probably expected, Bryce Hamilton is not dressed for tonight’s game and will not play against Benedictine Mesa due to a sprained ankle.

UNLV said on Wednesday that Hamilton was questionable for the game, but considering the opponent and the fact that a series with Utah State is just days away, it makes sense to let Hamilton rest tonight in an effort to get him back near 100 percent for when Mountain West play resumes.

The starting five has not yet been revealed, but it’s likely that either freshman wing Nick Blake or sophomore forward Moses Wood will step into the lineup in place of Hamilton.

Thursday’s home matchup against Benedictine Mesa (5 p.m., Cox Yurview) is unlikely to amount to more than a tune-up for UNLV, but there are some important storylines to follow as T.J. Otzelberger’s squad tries to keep the momentum rolling after their two-game sweep of New Mexico.

Junior wing Bryce Hamilton is questionable for tonight’s game due to a sprained ankle suffered in the closing minutes of Monday’s win over New Mexico. UNLV shouldn’t need its 20-points-per-game scorer in order to take care of business against Benedictine Mesa, and if Hamilton doesn’t play it will be interesting to see who steps up in his place.

The obvious candidate is freshman Nick Blake, who appears to be blossoming as the team’s top scoring option off the bench. Blake averaged 14 points in the two games against New Mexico and has posted strong advanced numbers in conference play. If Hamilton can’t go, fans may get a glimpse of what Blake can do when given 30-plus minutes and a green light.

UNLV couldn’t put the ball in the basket on Monday, shooting 36.7 percent as a team while connecting on just 6-of-20 from 3-point range (30.0 percent). That was enough to barely edge past a terrible New Mexico team, but a shooting performance like that will result in a blowout loss against Mountain West power Utah State, who is set to come to town on Monday and Wednesday.

This contest against Benedictine Mesa should give UNLV’s shooters a chance to lock in and get their strokes right before jumping back into MWC play. A game where the scarlet and gray knocks down close to 40 percent from deep would be a real confidence booster.

UNLV has been riding starting center Mbacke Diong pretty hard recently; in conference play, the 6-foot-11 senior has been logging 31.8 minutes, third on the team. It would be nice if there was a competent option behind him just to let the big man get a breather once in a while.

Otzelberger has opted to go small most of the time, calling on 6-foot-8 forward Moses Wood to play center most of the time when Diong is off the floor. But perhaps tonight, with a win assured, the coach will give players like junior Edoardo Del Cadia and freshman Jhaylon Martinez a look at the center position. It’s not a crucial point, as Diong is giving UNLV strong play on both ends of the floor right now, but something that could benefit the team later in the season if they want to keep Diong fresh for the stretch run.