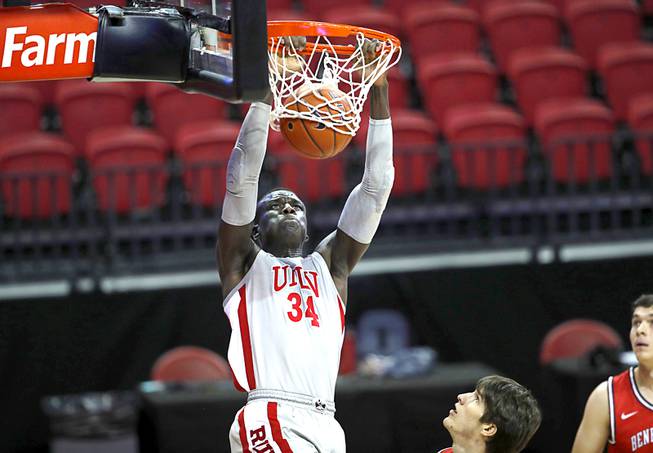 Six minutes into UNLV’s scheduled-on-the-fly contest against Benedictine Mesa it became quite clear that the scarlet and gray were on their way to an uncontested win. T.J. Otzelberger’s squad jumped out to an immediate 23-2 lead against their overmatched NAIA opponent, and so the question became, what is UNLV going to get out of this exercise?

According to Otzelberger, UNLV’s 99-45 victory over the Redhawks mainly served as a confidence-builder as the team prepares to take on Utah State (Monday and Wednesday).

Taken in that context, Thursday’s beatdown of a clearly inferior opponent was a success, because there’s no way UNLV could have jogged off the court after the way they demolished Benedictine Mesa and not felt good about themselves. Just about every player on the roster got a chance to shine, and they all took advantage of it.

Mbacke Diong must have been on cloud nine after posting a career-high 22 points (along with 11 rebounds and two blocks). David Jenkins must have felt 10 feet tall after knocking down 4-of-5 from 3-point range on his way to 20 points (his third 20-point performance of the year). And freshman Nick Blake must have felt like a million bucks after turning in 15 points, seven assists and five rebounds (in his first career start).

Yes, UNLV may have started the season 1-4, but they’ve now run off four consecutive wins (including two NAIA “confidence-builders) and Otzelberger likes what he’s seeing.

“I was happy to see how our guys approached this opportunity,” Otzelberger said. “I thought our defense to start each half was really sound and we had great focus.”

The game would have been a crowd pleaser if fans were allowed in the Thomas & Mack Center. Instead, UNLV’s collection of alley-oops, fast breaks and long 3-pointers served no purpose other than to reassure the players themselves that they’re capable of playing at a high level when they do things the right way.

Though UNLV’s four-game winning streak has come against a collection of misfit teams (NAIA Saint Katherine, two against New Mexico and Benedictine Mesa), Jenkins hopes he and his teammates will be able to carry the momentum into next week’s series against Utah State, which currently sits in a tie for first place in the Mountain West.

“We want to have the same approach with every game, it doesn’t matter if it’s the team we played tonight or someone like Utah State who we play on Monday,” Jenkins said. “We prep the same way as we would for any other team as we did for this team. We’ve won four in a row, obviously, so it’s something we want to build on going into Utah State.”

Like the Saint Katherine contest, Thursday’s game counted as a regular-season game for UNLV. The scarlet and gray are now 5-6 on the season and 2-2 in the Mountain West.