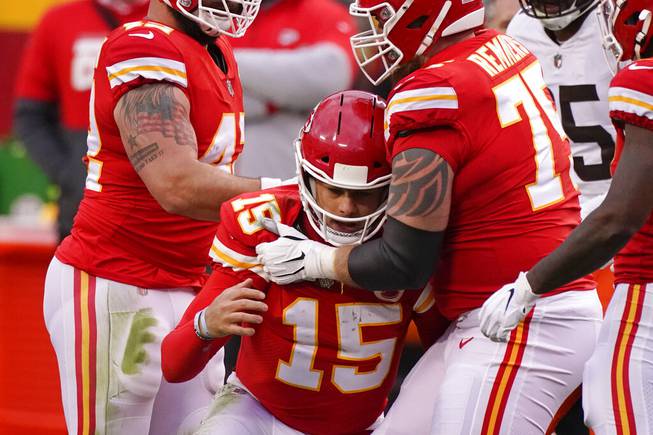 Kansas City Chiefs quarterback Patrick Mahomes (15) is helped off the field by teammate Mike Remmers, right, after getting injured during the second half of an NFL divisional round football game against the Cleveland Browns, Sunday, Jan. 17, 2021, in Kansas City.

Based on the lookahead Super Bowl lines, the best of the four possible matchups for the sake of Nevada sports books would be the Kansas City Chiefs taking on the Tampa Bay Buccaneers.

The Chiefs are currently a 3-point favorite over the Buccaneers on the early lines at both William Hill and the Westgate Las Vegas SuperBook while all the other pairings have a spread inside of a field goal. That’s meaningful for betting action because it would give gamblers another opportunity for a primary wagering option with the moneyline, where Kansas City is currently -150 (risking $1.50 to win $1) with Tampa Bay coming back at +130 (risking $1 to win $1.30).

Every other potential game trends so close to a pick’em that there’s minimal if any difference between the point spread and money line.

It’s no coincidence that 2018 set the all-time record with $158.5 million wagered statewide when there was more of a perceived margin between the two sides. The Patriots, favored by 4.5 points on the spread, went off at-180 on the moneyline with the Eagles coming back at +160.

Just as many large bets came in on the game’s straight-up prices than did on the point spread. Some sports books even reported a loss because of a flood of money on the Eagles to win outright ahead of their 41-33 upset.

So what’s the likelihood of Kansas City-Tampa Bay and therefore a real moneyline this year?

Read my picks on the two conference championship games below. Lines are the best currently available in Las Vegas on the chosen side. The record for the year stands at 139-119-8 after going 2-2 last week and 7-3 so far on the playoffs.

Tampa Bay Buccaneers +3.5 at Green Bay Packers This is only a play at +3.5 or better, a price that’s now starting to seep back into the market including at a valuable, flat -110 (risking $1.10 to win $1) at South Point. It was an easy play at some spots’ opening price of +4 or +4.5. There’s just no statistical evidence that there’s much difference between these two teams. Any statistical evidence in fact, big or small, would indicate the Buccaneers are the slightly better side. They’re superior in Football Outsiders’ DVOA, expected points added and net yards per play. Green Bay may deserve a small boost for homefield advantage as a compelling case can be made that Lambeau Field is one of the only venues that retains any edge. But even then, it’s hard to make a data-driven argument that this number should be higher than 3. Aaron Rodgers has been the most valuable player in the NFL this season and it’s terrifying to go up against him but Tom Brady’s efficiency shockingly isn’t that far off over the last several games. And Brady indisputably has better talent around him.

Buffalo Bills +3.5 at Kansas City Chiefs Like the aforementioned NFC game, getting the half-point hook — currently available only at Station Casinos — is imperative here. Kansas City -3.5 is the right price assuming full strength but that’s a pretty big assumption in this case. Unlike the first time these two teams met — a 26-17 Kansas City win in Buffalo as 5.5-point favorites — the Bills are the healthier team. And that’s before considering Patrick Mahomes, who will almost surely play but won’t be at 100 percent with a lingering foot injury. The Kansas City forecast currently calls for cold and windy conditions, which could lead to a lower-scoring game. Fewer points generally benefits the underdog but could even moreso in this instance by adding to the difficulty of the Chiefs getting the ball to their playmakers in space. The Chiefs have been given the benefit of the doubt all season because of their success last year and Mahomes’ otherworldly ability to take over a game, and despite failing to cover in eight of their last 10 games, it’s hard to dispute they don’t deserve it. But from an efficiency standpoint, they’ve taken a step back from last year’s Super Bowl team and relied too heavily on sneaking out narrow wins at the end of games. That could get them into trouble against the Bills, or perhaps more likely, this winds up like so many of Kansas City’s games throughout the year. Maybe the Chiefs win in dramatic fashion with a game-winning field goal that keeps the Bills within the number.

Nick Blake, Moses Wood making an impact off the bench for UNLV