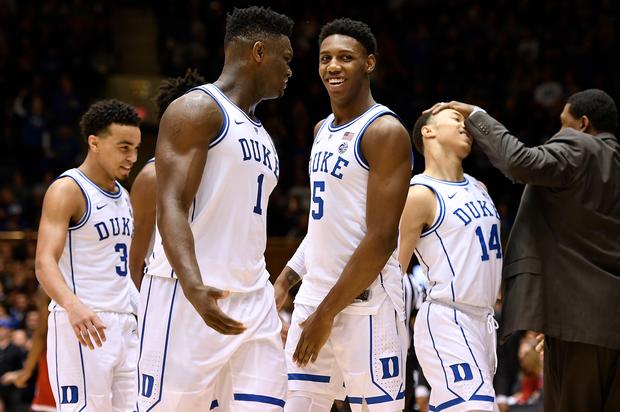 R.J. Barrett put numbers on the board, without committing a single turnover.

While Zion Williamson seems to hog all the attention on the number two-ranked Duke Blue Devils men’s basketball team, it’s R.J. Barrett who landed the first triple-double of all the players assembled in this year’s illustrious recruiting class. Last night, Barrett posted 23 points, 11 rebounds, and 10 assists, with no turnovers whatsoever, making him just the 4th Blue Devil in history to record a triple-double. The all-time list is comprised of Gene Banks (1978) and Art Heyman (1963) from the golden era before the current golden era.

Barrett joins Shelden Williams as the only other Duke player coached by Mike Krzyzewski to achieve such an honor. “When I got down there, the Crazies were telling me, ‘You need one more!’ I was like, ‘I gotta, I need it, I need it, I gotta get it!'” Barrett said enthusiastically in the waking moments of the team’s celebration. For what it’s worth, Duke did knock off NC State by a score of 94-78 for those who actually care to understand how the AP Top 25 is tabulated, from one game to the next.

“I’m really thankful,” said Barrett, in reference to an illness that almost barred him from competing in the game. “It really does help when you’re playing with great teammates who can make shots, finish down low. They just open up the court for me to make decisions.”

Coach K would later admit that while R.J. Barrett was a special one, perhaps one of the best talents to ever don Duke’s white and blue, he nevertheless doesn’t expect either he or Zion Williamson to stick around for much longer. The NBA is knocking for both these 5-star recruits, and it might go down within the first two picks of next year’s Draft.