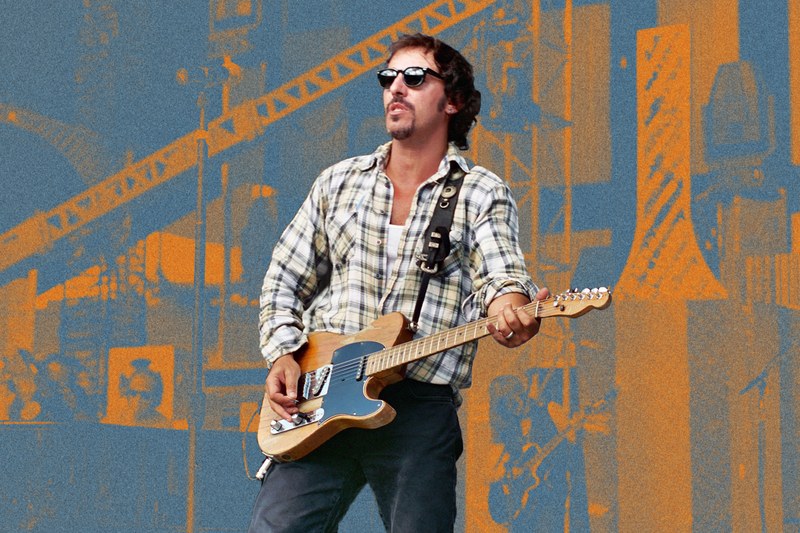 Remember When Bruce Springsteen Had a Wild ’90s Goatee?

On a style icon’s dark period.

The year is 1997. It’s Grammy night in New York City. Ellen DeGeneres hosts. Celine Dion beats out the Fugees, Beck, and the Smashing Pumpkins for album of the year; Al Franken takes home an award for a comedy album called Rush Limbaugh Is a Big Fat Idiot. Backstage, a photographer captures Sting and Bruce Springsteen palling around. It’s been a good night for both: Sting was nominated for four awards, and Springsteen took home the Grammy for Best Contemporary Folk Album.

But that’s not really the reason I’m fascinated by the photo. No, I can’t stop staring at it because of what they look like. Sting wears a navy blazer, maybe a size 42 Extremely Long, that extends to the bottom of the frame, over what appears to be a button-up bomber jacket. But Springsteen is the real winner here. He’s wearing a dark suit, no tie, and a Shaft-grade leather trench coat. He sports a delicately manicured goatee, complete with soul patch. He looks like an off-duty vice detective, or maybe a recently made man. He does not look like Bruce Springsteen.

The photo reminds me of something I’ve forgotten, or tried hard to forget: that for a sustained period in the mid-1990s, Bruce Springsteen went out into the world every day with a rough goatee and a penchant for leather outerwear. Which is to say: For a not-insignificant amount of time, one of the most legendary stylish musicians of all time was dressing like a suburban New Jersey dad. (Of course, by this point Springsteen was a suburban New Jersey dad, so maybe it’s more accurate to say he was dressing like one of Bruce Springsteen’s neighbors.) I still have a hard time believing this happened.

But it did. I am something of a Boss aficionado, with a complete set of albums and a Springsteen-focused college essay in my shame archives. And at least until today, I was ready to break his style into three rough historical epochs.

Then, as the E Street Band moved from nightclubs to stadiums, and as the music shifted from anthemic rock to preposterously anthemic rock, Springsteen’s style shifted accordingly: This was the time of Born in the U.S.A., jeans and white sneakers, tank tops, bandanas tied around any and all parts of the body, but especially the head.

After that, I figured, he entered the Third Epoch of Bruuuuuce: jeans too skinny for your dad but right for 60-year-old Springsteen; vests over T-shirts; enough Varvatos to fill a storage unit.

Reader, I was wrong. There are far more tough Bruce fits than I ever realized, enough to fill a wing of the Rock & Roll Hall of Fame, or at least a period-specific Instagram account. There are a few possible reasons for my blind spot—I was into early Bruce, not middle-period Bruce; people don’t really talk about Tunnel of Love, even though it’s incredible; Springsteen had broken up the E Street Band, and I wasn’t ready to forgive him—but it was there nonetheless. And what I found astounded me.

I don’t mean to laugh at the guy. These are goofy outfits, sure, but he still looks great. He’s Bruce Springsteen! And as fashion gets stranger and more ’90s-obsessed, it is a near guarantee that I will find myself wearing a big puffy shirt, a vest, and a dangly necklace sooner than I care to admit. But I think something more significant might have been happening.

His music was changing, and not necessarily in ways his fans appreciated. He released a string of records that didn’t sell quite as well. He chronicled intimate relationships, not fantasies of escape. He was trying to outrun himself. He had plenty to run to, anyway. In 1997, Springsteen was 47. His oldest child was 6 years old, the youngest 3. They’d all moved back to New Jersey. He was busy being a dad, not wearing hole-ridden tees in a dank boardwalk nightclub. This is what it looks like when a style icon takes a breather to figure some stuff out.

Two years later, he’d be inducted into the Rock & Roll Hall of Fame. He’d get the band back together and start dressing in his preferred Grown-Ass Rock Star costume—skinny jeans, fancy boots, all of it black and weathered—again. But I think it’s worth dwelling on these ’90s photos for the reminder they give us: that personal style doesn’t exist outside of time. It’s heavily contingent on where you live and when, on what you do and who you hang out with. For a while there, Bruce Springsteen didn’t look much like Bruce Springsteen at all. Of course, he was there all along—leather jacket, goatee, and all.