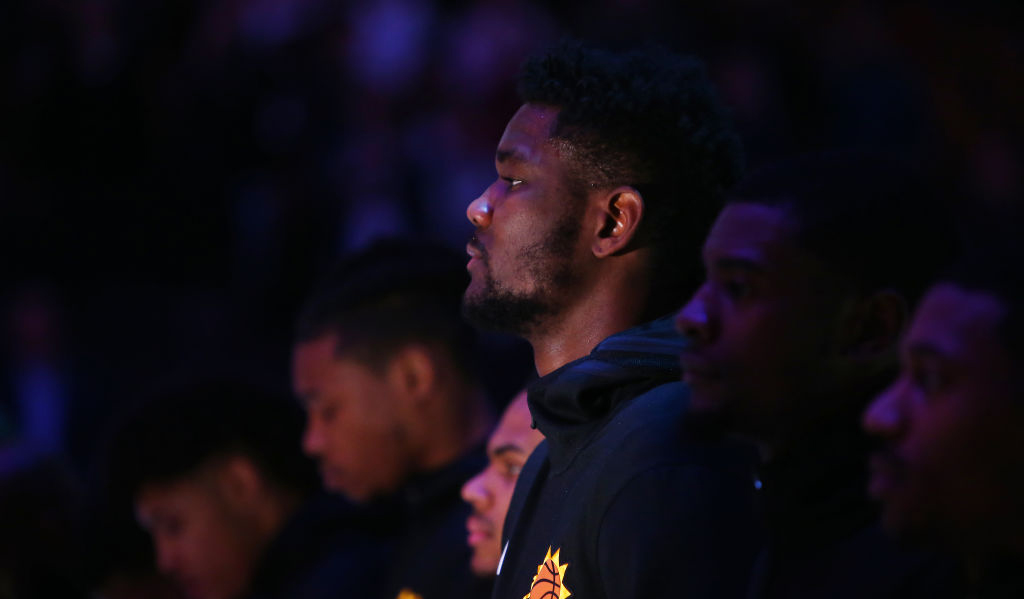 An alarm sounds at 7:30 a.m., and Deandre Ayton—all 7’1” and 250 pounds of him—lumbers out of bed. Approximately 20 minutes later, the rookie center arrives at the Phoenix Suns’ practice facility. By 10 a.m., he’s eaten breakfast and downed a bottle of his favorite Rockin’ Protein drink ahead of a treatment session. Around 11 a.m., he lifts weights before watching film with teammates at noon. By 12:30 p.m., Ayton and the Suns hit the court for practice.

And then the fun begins.

“We compete. We go at it,” Ayton told Sports Illustrated. “And everybody goes home achin’.”

As busy as it sounds, this is the kind of morning routine that Ayton, 20, loves. On the court, the 2018 NBA draft’s No. 1 pick feels most comfortable. It’s a better alternative to the daily routines he coursed during his lone season at Arizona.

“No school. No homework. I have none of those issues,” Ayton said. “When I’m waking up, I’m going to practice. I’m going to work on my craft, not sit and listen to the professor and worry about a pop-quiz.”

SHARP: And Then DeMarcus Cousins Was on the Warriors

But the challenges that college courses pose perhaps dwarf in comparison to the stress Ayton has faced throughout his first NBA season. The inevitably meager situation in Phoenix which he stepped into offers a unique learning experience of its own. Once again, the Suns are a non-factor in the Western Conference, last place at 11–48. Phoenix entered the All-Star break on a season-worst 15-game losing streak. Thirty-one of the Suns’ defeats this season have come by double-digits.

Ayton himself is learning to endure a long, daunting NBA season, having already had a run-in with the proverbial rookie wall. He is learning to navigate the NBA’s business world, too. There’s been positive: He’s become a spokesman for Rockin’ Protein, for example. He’s also faced the harsh reality of teammates being jettisoned in the blink of an eye, just as forward Ryan Anderson—whom Ayton credits for sitting him down and teaching him “tricks of the trade” and how to invest his income—was dealt ahead of the trade deadline.

But through it all, Ayton maintains a positive mindset. The tone in his voice is frankly relaxed, not reflective of someone hung up on the complications surrounding them.

“Emotionally, I feel great,” Ayton said. “Just that competitive spirit wants to win every time. I just wanna win right now. I can’t really help that, it’s just how I’m built. Bodywise and everything, I feel amazing. I’m ready for anything.”

Phoenix’s young core, helmed by Ayton, guard Devin Booker and forward Josh Jackson, has provided rare glimmers of promise throughout the Suns’ season. While his effort has yet to translate to consistent victories, Ayton is doing what he can to propel the Suns forward. He’s averaging 16.5 points (third among rookies), 10.5 rebounds (first among rookies) in 30.9 minutes per game. He’s making 58.8% of his shots. His play earned him a chance to represent the Bahamas as a part of Team World during the Rising Stars Challenge at All-Star Weekend. Ayton admitted there was going to be some pressure. He found himself anxious to be a part of one of the most celebrated weekends of the NBA calendar.

“It’s gonna be pretty lit,” he said. “It’s gonna be an honor. I’m blessed—super blessed—to be selected in this thing. I remember watching it when I was with Basketball Without Borders camp when Zach LaVine and Aaron Gordon went at it in that dunk contest (in 2016). Now, I’m gonna be there. A dream come true.”

When All-Star festivities end, the repetition of Ayton’s routine will pick up where it left off again, and he will be back within his current situation. The Suns are a young squad—their season-opening roster’s average age of 25.2 ranked fourth-youngest in the league. Guards Jamal Crawford (in his 18th season) and Troy Daniels (sixth season) are the only Phoenix players currently boasting more than five years of NBA experience.

Such a large collection of youth makes leadership seemingly tricky to foster, but Ayton is plain about his role in the locker room. He wants to take charge. The Suns will be his team.

“Everybody puts their own input in at times, but I’m trying to emphasize that I’ll be the alpha dog on the team,” he said. “Not to take away from everybody, but that’s how I am. I just wanna lead. That’s just very natural with who I am.”

Ayton insists he understands how to communicate with players his age, stressing the ability to praise and uplift teammates while still offering constructive criticism. Yelling and cussing, he notes, isn’t the most effective form of motivation, especially for younger players.

“From the growing pains, you know that better days are coming,” Ayton said. “It’s good to see everyone’s habits, bad habits, their attitudes. Just seeing how everybody responds to certain things, I’m just really learning. Because there’s gonna be a time when Phoenix starts getting pretty good and there’s more maturity on the team, more vets. So guys will just really grow in and become a dynasty team Phoenix has always wanted.”

The Suns, for now, appear to be far from establishing themselves as a powerhouse. But Ayton is one of Phoenix’s foundational pieces for reaching such heights, and he’s confident in what the group around him can accomplish in due time.

It’s not easy to remain positive when results are not. Nonetheless, he remains believes the Suns can be great. If anything, he’s going to do everything within his power to see it come to fruition.

“I know I can do more in this league,” Ayton said. “I can do so much damage in this league on the floor. It’s fun to see it and just working hard and competing against the best players in the world. It’s amazing. I’m just happy every day to compete.”