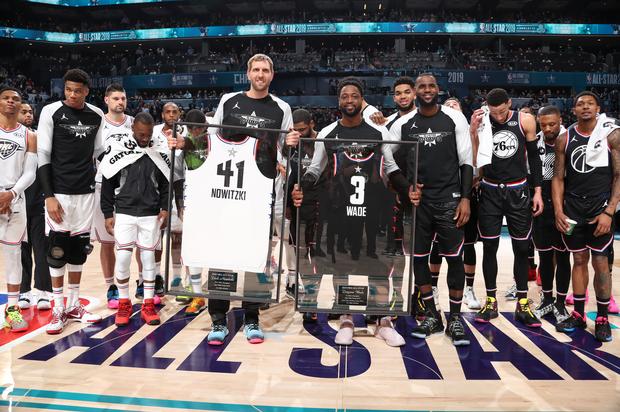 The two legends were given a warm welcome by the crowd.

Dwyane Wade and Dirk Nowitzki are on the fast track to the Basketball Hall of Fame and there is really no disputing that. Both players have had some incredible careers that are winding down to the end. Wade has made it clear that this is his final season in the league, while Nowitzki hasn’t confirmed it but it appears as though this could be his final season as well. Neither player made it to the All-Star Game, although commissioner Adam Silver decided to add them to the rosters anyway.

Both players were honored with framed All-Star jerseys and some pretty hefty applause from the crowd.

“This one was special,” Wade said according to ESPN. “I’m just thankful for the NBA for making sure and accommodating one of the things that I didn’t even think I needed or wanted. My team did an amazing job, my family. I couldn’t ask for anything more of this weekend. It definitely was my most enjoyable. People like to ask, and this one will take the place now as my most memorable and most enjoyable All-Star.”

Nowitzki echoed those sentiments after the game saying:

“That was obviously awesome. I wanted just to play a few minutes and hoist up a 3 and that’s exactly what happened. The first one I was a little deep, but I was like, ‘Hey, last time on this stage, I’m going to go for it.’ It went in. The second one I was like, ‘Hey, let me step back a little more and see what happens,’ and it went in too. It was just a fun all around weekend for me. It was a pleasure to compete with these guys one more time on this stage. I got honored in between the third and fourth quarter, that was emotional, so it was a great weekend for me and I’m ready to go home.”

Wade ended up defeating Nowitzki as Team LeBron won the game by a score of 178-164.