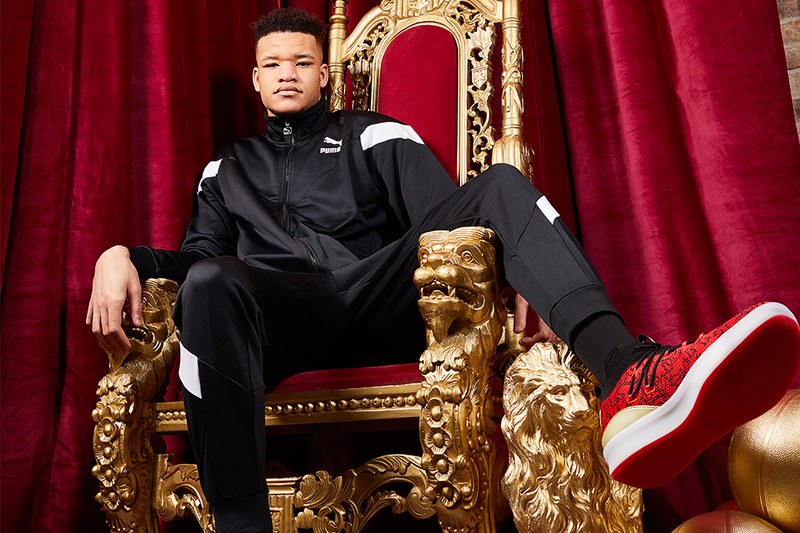 Puma doesn’t just want to sell shoes—it wants to be a part of hoops culture. Here’s how the brand is doing it.

Puma executives liked DeAndre Ayton, but they really liked Josh. The saw the highlights of the seven-foot Ayton draining threes. They heard the whispered guarantees that the Arizona prospect was a lock to go number one in the draft—a major boon to a rookie’s profile. But it was only after Ayton started talking like a “generic white dude” that Puma global director of brand and marketing Adam Petrick knew they had to sign him. That “generic white dude” is Josh, one of the three characters Ayton—now a rookie for the Phoenix Suns—plays. (This isn’t a joke: Ayton likes to play different characters, randomly morphing into individuals with different voices, personalities, and hobbies mid-conversation. In addition to Josh, there’s Alejandro, who appears when Ayton’s doing something he doesn’t want to, and the Fortnite-loving Eric.)

The brand has a deep history in hoops. Puma was the first sneaker brand to ever give a player—Walt “Clyde” Frazier—a signature basketball shoe. But Puma’s last basketball signee was Vince Carter, who inked a 10-year deal in 1998. A whole decade of the ageless Vinsanity seemed like the perfect idea until Carter terminated the deal just two years after signing—either because the sneakers hurt his feet or Puma didn’t rush his signature shoe to the market quickly enough, according to reports at the time. Less notable players like Kenny Anderson and Sam Perkins wore Puma into the 2001 season, but after that the brand’s presence in hoops evaporated.

Start with the numbers. A basketball game lasts 48 minutes. Nike is going to dominate practically all of that time: when you watch feet move across an NBA court, you’re probably watching Nikes. So Puma’s attack plan is to go after everything else basketball bleeds into. “What’s important is all the stuff that comes the other twenty three hours and twelve minutes of the day,” says Petrick. “The Twitter cycle, and the TNT commentary, and the hats, and the outfit, and the cars, and the haircuts, and the tattoos, The everything else that’s just as much a part of the culture of basketball as the game.”

Kernan equates getting into the NBA today with a marketing expense. “Puma’s making a lot of investments in [the NBA] to be more relevant as a brand versus producing a lot of top line growth in the basketball category itself,” says Kernan. “Of all the big four sports [basketball, baseball, football, hockey] in the U.S., the NBA is far ahead of the others in terms of influencing fashion and pop culture.”

That is why Puma (and presumably New Balance and Converse and Goat) decided it wasn’t worth sitting out, no matter the risks. Even if the category of basketball shoes is “very low to no growth,” the real opportunity for brands is involvement in the culture around basketball. The idea that a customer might see Puma on the basketball court and decide to buy one of its non-hoops sneakers is firmly in the minds of executives. “The halo effect should help us overall,” says Petrick. “The fact that it’s basketball and all the cultural aspects of the shoe do help us play in the space of style and fashion as well.”

So Puma is investing heavily into the everything else. Priority one was a A-plus-plus-plus hired gun in Jay-Z, who signed on as the German brand’s creative director for basketball. The superstar rapper pushed the idea to launch with the traffic-cone-orange shoes Clyde Court “Disrupt.” (The shoes are inspired by the ones originally worn by Clyde in almost half a century ago.) Hov called them a hit record—something he would know more about than almost anyone else. Puma has plenty more shoes in the pipeline—the brand will release its second new basketball shoe, the Uproar, during All-Star weekend—but the Disrupt was the first, and the single is critically important to hooking people. “He was like, ‘This is the way to launch, because we want to change the way that people dress,'” Petrick recalls. If you’re wearing bright orange shoes, the thinking goes, you might change the rest of your outfit, too. Perhaps with some Puma sweats?

Disrupt is not just the name of the first colorway Puma put out, but a pretty good summation of its strategy thus far. Kicking off with a shoe that can be seen from the nosebleeds—and that don’t look like Nikes—isn’t a bad start. “The big wave now is being able to wear different colors,” says Danny Green, a guard for the Toronto Raptors who signed with Puma last October. ”People want to stand out.”

But that same strategy of “disrupt” runs through everything Puma is trying to do—it’s why the brand was so sold on Ayton—and Eric, Alejandro, and Josh. Petrick says that signing players with a sense of humor is a top priority. “Having a player like DeAndre, for example, who’s coming out and putting up great numbers, and is absolutely a contender for all of the accolades that a rookie can get is exciting for us,” Petrick says. “But the fact that he’s got his weird three-persona thing is almost as important to me as the numbers he’s putting up.”

Then, of course, there’s the Puma Jet: a Gulfstream GV, with white leather seats and champagne glasses engraved with the brand’s logo, on hand for the 10 players currently on Puma’s roster. Naturally, that was Jay-Z’s idea too, according to an ESPN story. “[The jet] was a selling point for sure,” Green says. He hasn’t been able to try it out yet, but was considering taking it for a spin down to All-Star Weekend in Charlotte, where he’s competing in the three-point contest.

Crucially, the social media and marketing don’t quite align with what we’ve come to expect from sneaker brands: Player X, typically in black and white, vanquishing their haters, overcoming adversity, just doing it. When the news broke that Kawhi Leonard and Jordan were not going to reup their contract, back in July of last year, Puma got involved. While most brands quietly plotted, Puma shared a tweet of The Office character Jim Halpert staring conspiratorially through a window, a phantom Jay-Z floating above his shoulder. The strategy is refreshing if only because we’re accustomed to sneaker companies treating their plans like state secrets. Petrick doesn’t get that. “Giant sneaker brand is interested in a giant basketball player. Oops, you got us,” he says, sarcastically, when asked about the tweet. (Leonard eventually signed with New Balance, another brand with a relaunched basketball program.)

Maybe Puma won’t ever be able to topple Nike—or even Adidas, New Balance, and Converse. But getting a piece of the hype that comes with the NBA can be worth all the effort of competing. For now, Puma is taking shots where it can. The roster of athletes is pint-sized so far—it includes other standout rookies in New York Knick Kevin Knox and Sacramento King Marvin Bagley III, as well as fun role players like Boston’s “Scary” Terry Rozier—but Green prefers it that way. “[Puma’s] something that not everybody’s a part of,” he says. “Makes you feel a little bit more special, a little bit elite to be part of a small group.”

The latest player to show Puma off on the court is a perfect fit based on Petrick’s qualifications: the brash Golden State Warriors forward DeMarcus Cousins. The signing almost immediately paid dividends when Boogie, out with an injury for the better part of the season, jumped into a broadcast booth during a preseason game and Kevin Durant’s signature Nike shoes slipped off on the court. “That wouldn’t have happened in the Pumas,” Cousins joked. Puma, naturally, took to Instagram and made a meme.