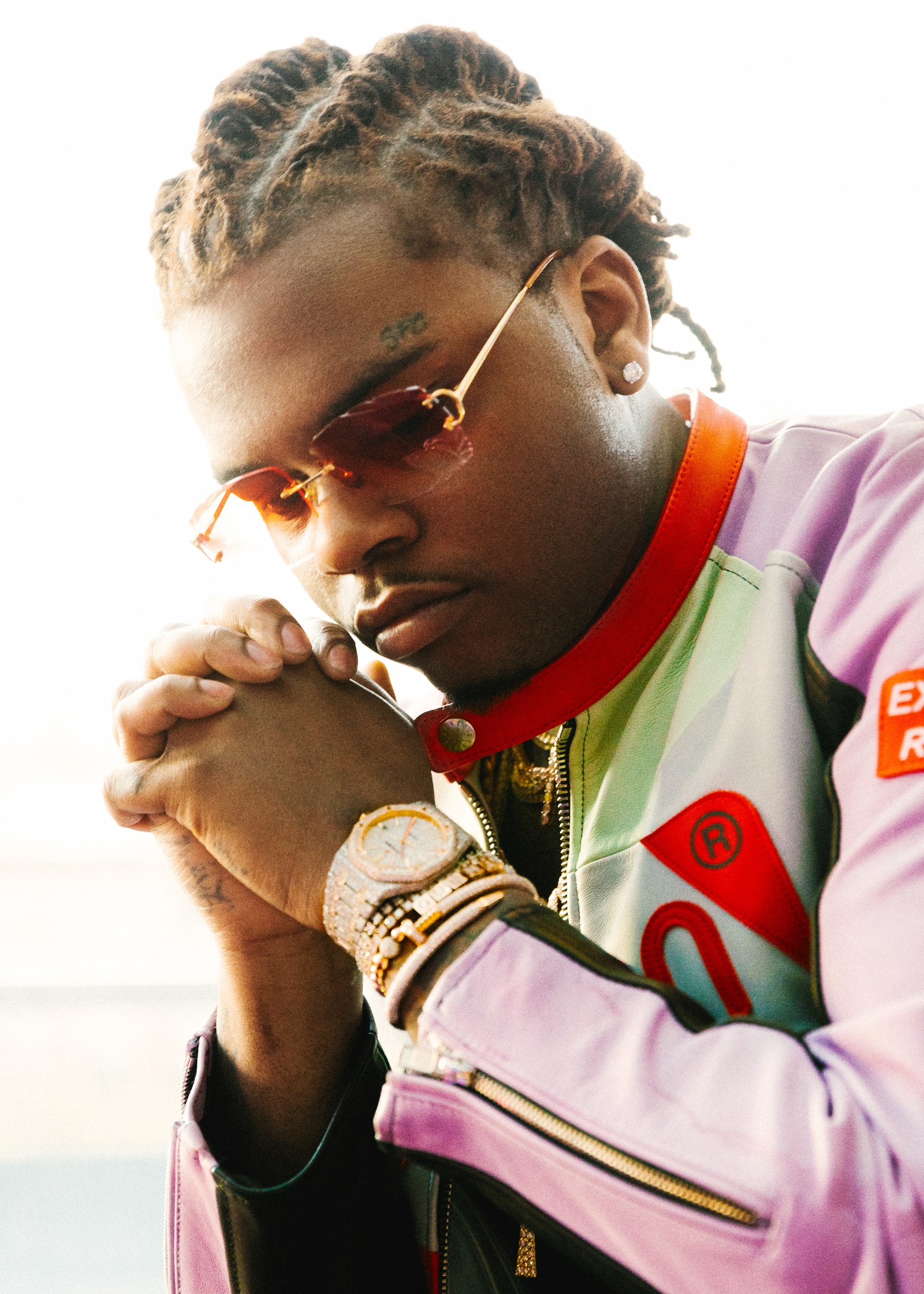 Gunna has seen your Gunna meme, and he is not feeling it. “It say, ‘No one’ and it say, ‘Gunna,’” he said. He looked skeptical. I suggested it was a commentary on his ever-present frameless rectangular shades. He smiled: “My trademark.”

Gunna is preparing to put out Drip or Drown 2, technically his debut album, later this month on Young Thug’s YSL Records, but he already boasts a sartorial trademark and has made a strong case for fashion month MVP. Shortly after we spoke on Friday, he sat front row at the Palm Angels show, where he hung behind a billowing cloud of blunt smoke with French Montana, and, just before 1 am, performed at the brand’s afterparty. The next night, he did a repeat performance at John Elliott: shades, front row blunt, keep the party going until late into the night.

This is a routine he perfected at Paris Men’s Week in January, when he lit up at Yohji Yamamoto. “I smoked a blunt at every show,” he explained, clarifying: “Weed is cool. To me. It’s legal in some states too. And it was legal right there in Paris that day.”

Part of being a young rapper—Gunna is 25—is not merely dressing the part but knowing your Raf Ozweegos from your Margiela Fusions. It also means sitting front row at fashion week. Gunna prefers to take in a show under the influence of weed, he explains, “’Cause when you high you think a lot. So when you lookin’ at all these pieces, you’re like, Oh, I know what I’m gonna do when I get that.” This is the man who claims to have invented drip, after all: “It’s like style, persona and like, how you carry yourself. That’s your drip.” You can see how that plays out in Gunna’s style, which is less about the individual pieces than how he mixes them, like the lime green windbreaker and cargo pants he paired with a tie-dye cable knit turtleneck. When we met, he was wearing sweatpants with a red tuxedo stripe (he doesn’t remember who made them) with black Margiela sneakers and a jacket made from leather patches in pediatrician’s office purple, yellow, red, and placid green. On the back was the image of a giant pill and the text, “THINK OF ME AS A FRIEND.” Gunna said a guy got it for him in Japan; he had no idea who made it, but said it was “rare.” His hair was in frosty cornrows. He was wearing two tennis chains, two different kinds of crosses, and a Cuban link chain. He laid down for our interview (supine mode!) and remained stoic behind those rectangular shades. And like all people who are famous because they want to be, he smelled amazing.

Gunna works with a stylist, Bobby Williams, but it’s clear that the real style guru behind Gunna is…Gunna. “I just kind of like, put stuff together. I don’t really try to make it seem like a ‘look,’” he said. I asked him how he knows whether something is working. “You don’t know,” he said. “You just gotta have the confidence to know it is. Everybody not gonna like what I wear, but a majority of people are. Everybody’s not gonna understand what I wear because they don’t shop where I shop.”

Ah, yes: shopping. Gunna loves to shop. “I try to shop in every state that I go to,” he said. “I just google like, Saks 5th or Neimans or just they local mall.” Just the day before in Los Angeles, he said, he bought a pair of Margielas at Neiman’s and “a Raf Simons shirt but it’s got a scarf attached to it.” Wild! He’s also got guys at Chanel stores in Houston, Atlanta, New York, Los Angeles, and Hawaii, plus a contact at the Webster in Miami who texts him photos as soon as good stuff comes in, like this belt and beanie. Even his Byredo scent has a shopping backstory: “I’m wearing Mojave Ghost. They got ’em at Neimans. Soft, little light touch—baby girl just, ‘Mm, what you got on?’ It’s that nosecatcher.”

One of the perks of life at YSL Records is that Gunna has Thugga as a shopping partner. “We just went shopping together in Atlanta for Super Bowl weekend. We went shopping at Jeffrey’s and fucked Jeffrey’s up,” he said, referring to the Meatpacking District luxury store that also has a branch in Atlanta. He bought some Amiri shirts, he says, plus “two see-through Dior shirts. I got a Dior belt, I bought a Dior bag, like a little satchel. I bought a button-down, white with blue flowers—Dior shirt. Nice. Then I walked outta there and went to Gucci, got some Gucci pants—they got some new pants that just came out, they like cheetah and zebra print. They crazy.” Sounds like he is drowning in drip.