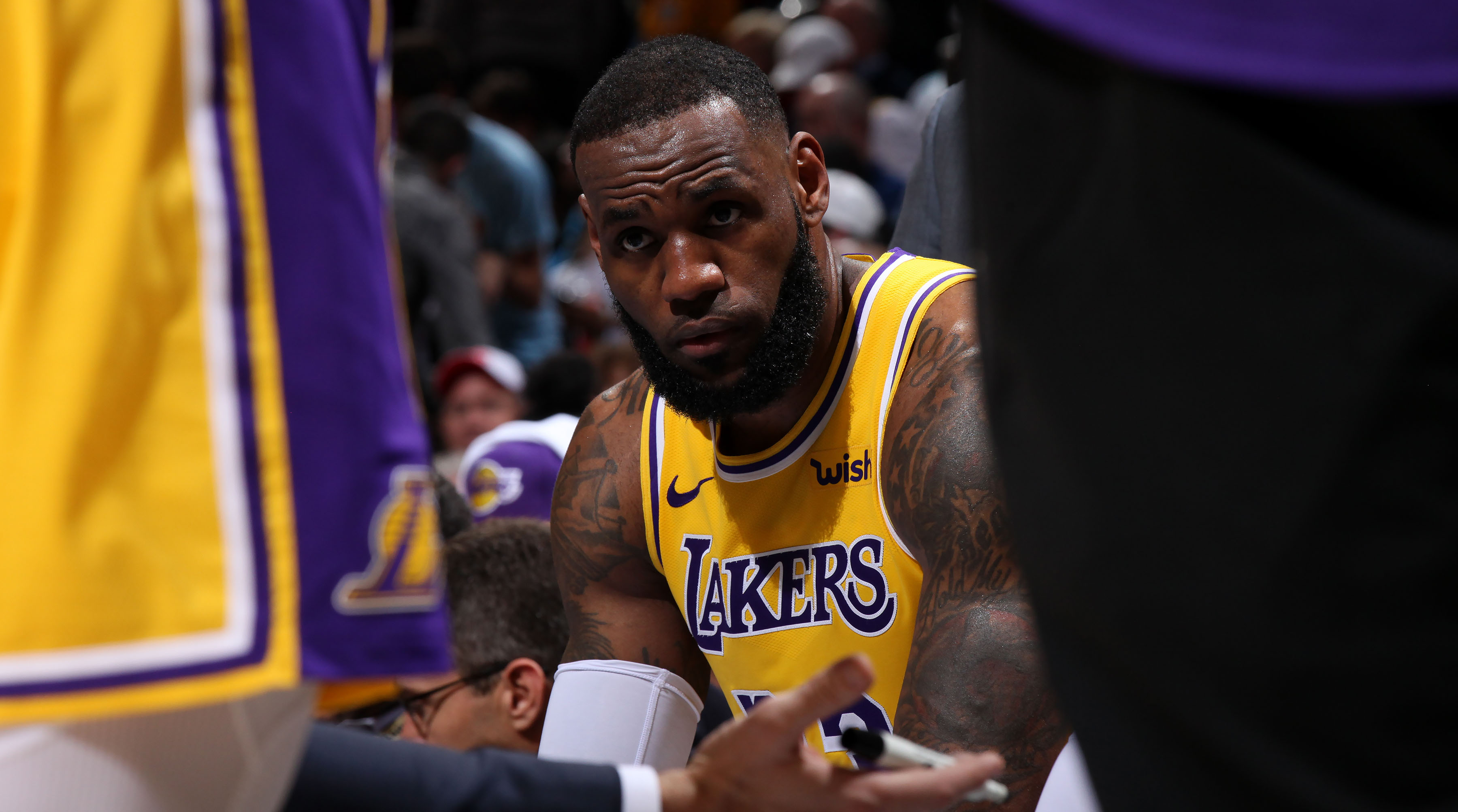 All-Star Weekend has come and gone, and the pomp and pageantry of the celebratory weekend will soon be replaced by bloodthirsty competition. Okay, so the NBA won’t exactly turn into The Hunger Games, but players will soon have to stop pretending to be polite when they return to their day jobs for the second half of the regular season. Here are what The Crossover believes will be some of the more important plot lines to watch in the two months before the postseason.

Will LeBron Make the Playoffs?

If the postseason started today, both Dwyane Wade and LeBron James wouldn’t be involved for the first time since 2003, when neither of them were professionals yet. James missing out would be the more shocking development. LeBron’s groin injury certainly played a huge role in the Lakers’ current predicament, which has them three games behind the Clippers for the eighth seed in the West.

What’s even best for L.A. at this point? Do the Lakers want to make the playoffs and get drubbed by the Warriors in the first round? Will free agents still want to sign there if they can’t get in? James has proven people wrong over and over and over and over and over again in his career. In the East, he seemingly could make the Finals with any combination of warm bodies. But LeBron no longer has All-Star running mates, and top-to-bottom, the West still offers much stiffer competition than the East. LeBron missing the playoffs sounds blasphemous, but it’s possible it’s in his best interests to do so. The Lakers will need to go on a run if they have designs on the postseason. Seeing how this team comes together after a rollercoaster year will arguably be the most fascinating (or at least the most dramatic) storyline during the second half of the season.

Can the Rockets Improve Defensively?

The dirty secret to Houston’s season is that its defense stinks. The Rockets are 25th in defensive efficiency after finishing in seventh last season. As well as Harden has played, that’s extremely concerning. A huge key to Houston’s success last season was how well the team defended, and its versatility on the perimeter. The Rockets pushed the Warriors to seven games in the West finals not just because of shooting heroics, but because they flustered Golden State at times with their switch-everything strategy that was tailored specifically for the Dubs.

I’m not sure Houston can fix its defense overnight, but some measure of help is on the way. Iman Shumpert can be a positive. So could improved and consistent health from the likes of Clint Capela and Chris Paul. And maybe Daryl Morey will add another wing defender in the buyout market. Still, the concerns surrounding this team when it lost Trevor Ariza and Luc Mbah a Moute have largely played out to be true. Harden’s 30-point streak is a marvel to watch, but this Rockets team is nothing like last season’s just because of The Beard’s virtuoso offensive performance. If Houston wants to have any hope against the Warriors, it needs the defense to step up in a major way.

Who Will Take Control of the MVP Race?

Remember when LeBron James was at or near the top of MVP ballots after the first quarter of the season? A lot can change over the course of 25 games. James’s injury torpedoed his MVP case, and in the meantime, James Harden has become the frontrunner thanks to his Wilt-esque scoring binge. Lurking in the wings are Giannis Antetokounmpo and Paul George, both of whom are compiling impressive cases. The Greek Freak is posting Shaq-like numbers for the best team in the league, while George is providing world-class defense on one end of the court and shooting like Stephen Curry on the other.

NADKARNI: The Best Moments from the 2019 All-Star Game

As the Rockets theoretically get healthier, it’s possible Harden’s numbers return slightly closer to the surface of the earth. If that’s the case, the door opens a bit more for Giannis and PG. The latter two players will be helped by their team’s success, and Antetokounmpo will have the benefit of playing without another superstar. (Though it’s technically Harden who doesn’t have an All-Star teammate.) There are going to be some fireworks down the stretch thanks to these three players. The MVP race is far from finished.

Will Anyone Emerge in the West?

We touched already on the Rockets, who last season were on a clear collision course with the Warriors all year long. In 2019, it’s a little less clear who will make the West finals, and if that team will have any chance of giving Golden State a series. The Thunder are still playing well as their schedule grows in difficulty, and George is currently a top-five player in the league. But do you trust Russell Westbrook and his jump shot in a series against the Dubs?

The Nuggets are a feel-good story but making a deep playoff run will be difficult for a core making its first postseason appearance together. I love Denver, but it remains to be seen how its principles will react to the pressure of May basketball. Right now, there’s no clear-cut No. 2 in the West. Perhaps in the second half of the season, one of the aforementioned teams will take a mini-leap and stake its claim as the one to be worthy of the Warriors’ challenge.

Will the Sixers Be a Better Team?

Philadelphia looked like it could make the Finals after drubbing Miami last postseason, then it ran into the upstart Celtics, who have since continued to dominate their matchup. The Sixers have remade their team since last summer, upgrading the best high-usage lineup from 2018 by replacing Robert Covington and Dario Saric with Jimmy Butler and Tobias Harris. Also on the roster for this year’s playoff push are Jonathon Simmons, James Ennis, Mike Scott and Boooobaaaaan. Philly has one game left against Boston, and it could desperately use a win, if only for an added boost of confidence.

I think the Sixers’ season is going to be fascinating. If they lose in the second round again, will the front office let Jimmy Butler walk? Was Elton Brand right to be so aggressive this early in Ben Simmons’s and Joel Embiid’s careers? Brand has shown no fear as a first-year general manager. Philly now has arguably the second-best starting lineup on paper in the league. If they can’t leap the Celtics, Bucks, or Raptors after all the wheeling and dealing, Brand may make even bigger splashes.

Flores, Taylor from SB53 to new jobs, scouts on Kyler