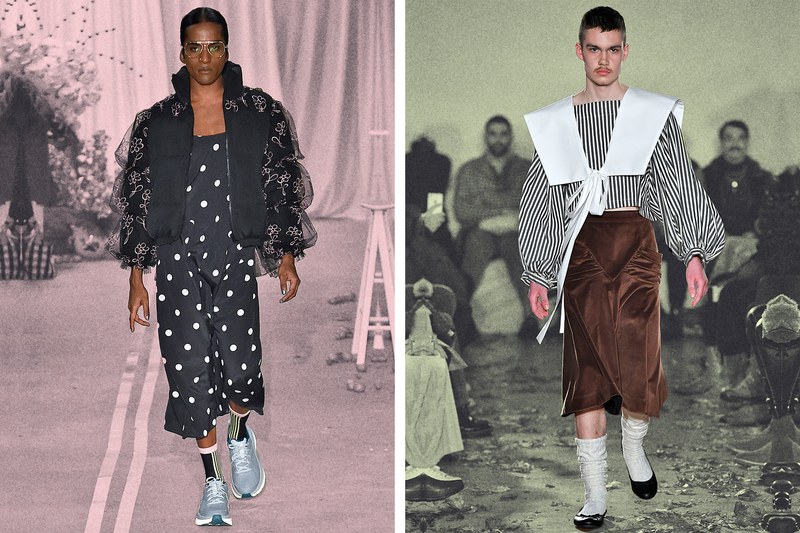 2019 Is the Year Men Will Start Wearing Skirts

Half a decade after Kanye’s kilt, designers are making men’s skirts like it’s no big deal.

In this world of men in Tabi’s, men in luxury harnesses, and Ezra Miller doing the absolute most, there remains one final frontier: men’s skirts.

Perhaps you’re thinking: men? In skirts? Call me when people are wearing sleeves as scarves. (People are wearing sleeves as scarves!) But it’s not quite as wild as it sounds. Young brands like Luar and Gypsy Sport have been sending male-identifying models down the runway in skirts and dresses for a handful of seasons now, and the proliferation of gender-neutral silhouettes everywhere from Eckhaus Latta to Maison Margiela has made borrowing from the other side of the rack, as it were, more casual than ever. Rick Owens has been making, and wearing, skirts for years. Raf Simons did it a decade ago. And one of Craig Green’s signature pieces is a skirt-like pair of trousers. Yada yada yada!

So the runway to a skirted world would seem to be clear. And yet, even as guys have started wearing truly insane things—the aforementioned Tabi boots and harnesses—the skirt is piece men have curiously resisted for decades. When Kanye West performed in a Givenchy kilt in 2012, people were like, “KANYE is wearing a SKIRT?!” He later wrote in Paper that it’s how he knew he was a fashion insider: “When you sit down with Riccardo Tisci at the Louvre and he pitches the idea of you wearing a leather kilt, which could be considered by all of your gangbanging friends as some sort of a dress or skirt, at that point you are now a part of the fashion world.” West continued that even though it wasn’t a typically masculine garment, “there are warriors that have killed people in kilts in the past. Who gets to decide what’s hard and what’s not hard?”

That was only seven years ago, but it shows how far we’ve advanced in terms of experimental dressing. Young Thug wears skirts all the time, even to play basketball, and it’s no big deal. Furthermore, fashion is far less interested in “hardness”—if anything, designers like Craig Green and Sander Lak at Sies Marjan are pushing softness and fragility.

It’s not just that people want to be cozy. As Lak said in his interview with GQ’s Noah Johnson, “straight men are sort of confused about who they are, what they are, and how they stand—the solution, maybe, is wearing a pink fur jacket because that shows another side. And I think that’s really great.” Clothing is a safe space for exploration. The skirt seems like a logical next step in the playground.

With that in mind, 2010 photographs of another stellar skirt wearer, Marc Jacobs, look even sharper now than they did a decade ago. If Thugga is a role model for the truly bold dressers among us, Jacobs is actually a good model for how to do it like it’s just an easy basic: with a crisp button-down, or a skinny knit, and a big bad shoe. He even seemed to nod to this look in the collection he showed Wednesday night, with an A-line skirt and gray sweater with an oversized black loafer. It looks loose and free and cool—and that sounds good right about now.