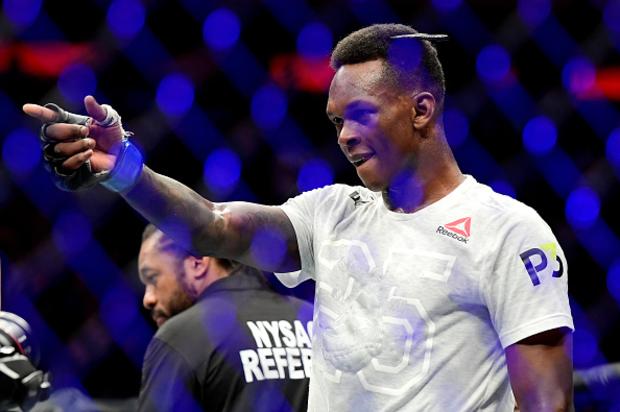 Adesanya vs Gastelum announced for UFC 236.

Israel “The Last Style Bender” Adesanya’s meteoric rise to the UFC main event scene will now include an interim title fight against Kelvin Gastelum at UFC 236, according to a report by ESPN’s Brett Okamoto.

The pay-per-view is scheduled to take place on April 13, but a venue has not yet been decided.

Current UFC Middleweight champion, Robert Whittaker, was forced to withdraw from his title bout against Gastelum at UFC 234 earlier this month in Melbourne, Australia, due to an abdominal hernia. Whittaker is still recovering, and ESPN reports that he is hoping to return by this summer.

As a result, Gastelum (16-3) dubbed himself the champion, as he was paraded around with a championship belt slung over his arm during UFC 234.

“This is my belt,” Gastelum said backstage at UFC 234 (H/T MMA Junkie). “I earned this. I showed up, traveled thousands and thousands of miles from home, made the weight. In my world, the wrestling world, if the guy shows up and makes the weight, for some reason cancels the bout, the guy forfeits the match – I win. I am the champion.”

Adesanya outclassed UFC legend Anderson Silva in the main event of UFC 234 to improve to 16-0, including a 5-0 record in the UFC in just a 12-month span.