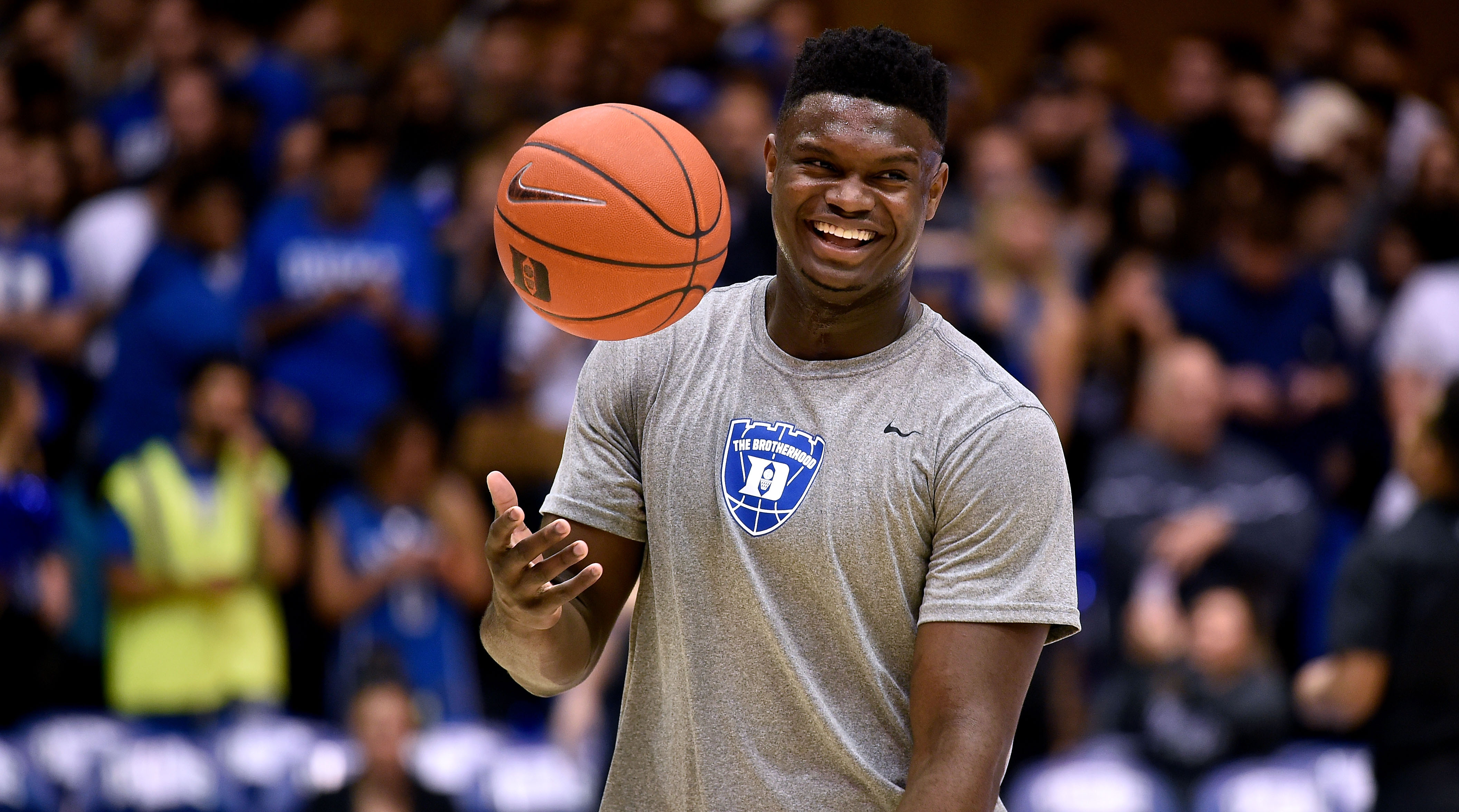 The entire NBA world will have an eye on Duke-North Carolina on Wednesday night, tuning in more for Zion Williamson than the pageantry of the historic rivalry. It’s fitting for the audience to match the atmosphere, as this game has collected the buzz of an enormous NBA clash, with tickets hitting Super Bowl prices and preview commercials running every hour on the hour.

Of course, with the game being framed this way, Sports Illustrated’s NBA staff had to weigh in. In advance of the game, we asked our staff what team they would most like to see land Zion Williamson.

While there might be better personnel fits, and frankly, more deserving franchises, Zion landing in New York would be an instant salve to the Knicks’ ongoing dysfunction, at least theoretically. Set aside the possibility of him playing with one or two star free agents for a second, and just consider the scenario where Williamson achieves his full potential as a foundational star in the NBA’s biggest market.

While installing Williamson won’t quite erase the scars of the Porzingis deal (signing a superstar is the key there), a future where the Knicks build around Williamson and grow the rest of the roster around him would be exciting. New York has never had a real chance to fix the team organically, and a lot of that stems from ownership, but if they’re ever going to try it, Zion is the ideal centerpiece. Will they be an immediate playoff team? No. But would Williamson, Dennis Smith Jr. and Kevin Knox put asses in seats? Sure.

Zion trying rescue a franchise by himself is honestly far and away more intriguing than him walking into a partnership with Kevin Durant and being born as a second option. We all want to see Zion spread his wings as far as he can. Watching him do it at Madison Square Garden for a decade would be something. Search for the emotional basketball purist deep inside you, and recognize the potential impact Williamson could have in saving a franchise that’s been stuck in the mud for a decade.

Why tie the dead weight of a tanking franchise around Zion’s waist when there’s a competitive, energetic young team hiding in plain sight? The Hawks are already darlings of the League Pass set thanks to John Collins and Trae Young, who operate at the league’s fastest pace and spread the floor with as much shooting as they can find. It’s the closest thing the NBA has to a perfect fit. Few teams, if any, have the defensive range to handle both Collins and Williamson at once—much less both while a playmaker of Young’s caliber connects the dots.

There’s a counterbalancing gravity between the three that works quite nicely, with no stubborn veterans around to throw them off balance or force Williamson awkwardly out of position. Between Zion, a full season of Collins, another year of internal development, some modest additions, and, frankly, the low bar in the East, the Hawks could actually be back in the playoff race as soon as next season. And even if not, give me Zion at full speed every damn night and sort out the rest later.

Here’s a novel idea—let’s reward the team that refuses to tank, no matter how logical it might be for them to do it. Miami’s relentless pursuit of playoff appearances has defined the Pat Riley/Erik Spoelstra era, and while the Heat odds to land Zion will be long if they don’t make the playoffs, is there a better landing spot for him? Worried about his conditioning? Stick him in the Heat program, which has re-shaped the figures of anyone from LeBron James to Dion Waiters. Need structure? Miami has one of the NBA’s best coaches in Spoelstra and runs a sharp, disciplined system. The Heat’s salary cap issues will make it difficult for them to build a high-level roster over the next few years. Zion’s best chance of developing winning habits early—and perhaps his best chance of winning, period—could be in Miami, one of the NBA’s most rock-solid organizations.

The correct answer to this question is Atlanta, but Rob Mahoney has already made the case for a lifetime of alley-oops from Trae Young and in-game dunk contests with John Collins. Absent the Hawks, there is only one other option worth dreaming about in the NBA lottery.

It’s true: to make this happen, LeBron and others in the Lakers front office would have to be physically restrained in order to keep them from immediately trading this pick for Anthony Davis. Imagine this scene, but with Joey Buss and Magic Johnson. And if the goal is chasing titles with LeBron, fine, maybe the Lakers would be better off flipping Zion for AD. But sweating the particulars of this scenario is beside the point. Whether you think we need Zion in Hollywood or an L.A. superteam around LeBron, or maybe both, there is only one path that matters for the next two months. The Lakers need to tank, win the lottery, and watch the world burn.

The blueprint for Zion Williamson was created in Chicago. Michael Jordan was the first player to roll everything up in one. He tested the rules of gravity, appeared in eye-catching advertisements and flashed a smile that screamed public pitchman. Zion has the ability to do all three at the college level, and his star will only rise once he enters the NBA. The business of Zion is a real thing, and he should go to a city where he can partake in the profits.

The Lakers and Knicks are obvious options here, but the magnifying glass is so potent in those cities that it could be tough for a player to truly develop on either theam. Off the court aside, the Bulls have a nice foundation of young players. Lauri Markkanen and Wendell Carter Jr. are a great start, and Zion is such a no-brainer that not even Chicago’s front office could mess this up. Once on the Bulls, he would be able to develop alongside young players without the pressure in L.A. or the lights of New York. Chicago has a history of creating stars, and Zion definitely fits that mold.

The scenario I’d most like to occur this offseason involves the Knicks winning the draft lottery, shipping the No. 1 pick, Kevin Knox, Dennis Smith Jr. and the two first rounders from Dallas for Anthony Davis, and hand-delivering Zion Williamson to the misfortunate Pelicans. Much of New Orleans’s current uncertainty does hinge on its own front office’s missteps. Dell Demps repeatedly mortgaged future assets to improve a weak core before he was finally fired. Solomon Hill’s 2016 contract will forever be a black stain on Davis’s tenure with the franchise. But the Pels have also experienced an incredible string of bad luck, with Davis and Jrue Holiday consistently missing time. DeMarcus Cousins’s achilles injury derailed a truly intriguing frontcourt pairing that the Warriors almost assuredly would have struggled to defend. What better way to make up for those lost years than supplanting Davis with the brightest draft star since The Brow himself?

Williamson and Holiday is a really nice combo for a punchy, upstart team in the West. The Duke star should flourish in Alvin Gentry’s motion offense, assuming the coach remains in New Orleans—all signs point to yes, for the time being, but new management could always tab their own guy. There’s a nice marketable strategy for Williamson in Louisiana as well. I can see him plastered on billboards in Mardis Gras attire and a “dunk parade” starting down Bourbon Street. The Pelicans’ forever-dirty cap sheet turns remarkably clean by the summer of 2021. What marquee free agents wouldn’t at least consider joining Williamson, then entering his third year in the league, and a still-only-30 Holiday? And regardless, that cap structure will allow whoever claims the reigns of NOLA’s basketball operations to cleanly build around Williamson in whicever manner they deem best, similar to the Bucks with Giannis Antetokounmpo. Let’s salvage a franchise in a truly great city.

We should root for Zion to unleash thunderous dunks in the postseason as soon as possible, making Dallas a perfect fit for the likely No. 1 pick. A young Big 3 in North Texas would be a thrilling next chapter for the Mavericks after the Dirk Nowitzki era, and Williamson fits better in Dallas’s timeline than New York’s should the Knicks land Kevin Durant and perhaps Kyrie Irving. Watching Williamson, Luka Doncic and Kristaps Porzingis would be a treat. If the Warriors’ dynasty ends, the next superteam out West could reside in the Lone Star State.

There’s also the on-court fit that makes Williamson in Dallas so enticing. Imagine the Luka to Zion lobs, the two-man pick-and-pop with Williamson and Porzingis. The Mavericks would quickly vault atop the NBA League Pass rankings. The odds are stacked against Dallas landing the draft’s best player for two straight years. But if the Mavs can pull it off, their future will be as bright as any team in the league.