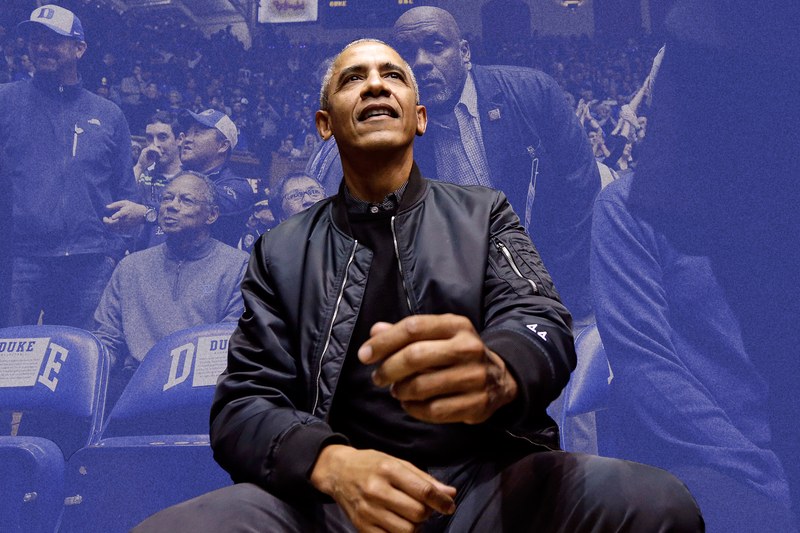 The most exciting part of last night’s Duke-UNC game took place off the court.

One of the most hyped up college basketball games of the season between Duke and the University of North Carolina turned into a dud eight seconds in when top prospect Zion Williamson proved too powerful for shoes made for mortals. Even if the game had been a barn-burner, though, the most exciting news out of the matchup might *still* have come from the sidelines, where former president Barack Obama was sitting in a bomber jacket embroidered with the number 44—a reference to himself, the 44th president.

The bomber jacket was made and embroidered by Rag & Bone, the brand confirmed to GQ in an email. You can find a similar one for $595 right here, and your local embroiderer should be able to add numerals to the sleeve. A word of warning: getting a 44 embroidered on the sleeve probably won’t have the same effect on anyone else. “The ‘44’ on the sleeve just felt like a subtle touch,” Marcus Wainwright, the founder and chief brand officer at Rag & Bone, said over the phone Thursday morning. “Not many people could have pulled it off that way. He’s got style.”

Although the bomber jacket isn’t exactly the most advanced style move, 57-year-old former presidents should be graded on a curve. The world of presidential fashion doesn’t often waver from black and navy suits—even the tan one worn by Obama caused a ruckus. So seeing 44 in a slim-fitting bomber jacket from a cool New York-based brand feels downright revelatory. (Especially when pitted against the current president, who uses tape to hold his ties together.)

Since exiting the Oval Office, Obama has evolved beyond the staid and stodgy fashion typical of presidents. There have been hits (leather jackets over chambray shirts) and misses (dad jeans; the Allbirds he wore with last night’s jacket), but last night Obama figured out that the best way to flex is to wear a jacket that literally no one else on the planet can.

While most of the world was tuned into the game, or at least obsessing over the jacket on Twitter, its designer was completely oblivious to the fact the former most powerful man in the world was wearing something he made. When the internet lit up over Obama’s jacket, Marcus Wainwright, the founder and chief brand officer at Rag & Bone, was with his kids at a school ice skating event. He woke up this morning to several texts, one from his head of marketing, about the jacket. “Fun to wake up to that,” he said. His initial impression of the look: “He looked pretty fucking cool.”

The moment has been a long time coming for Wainwright and Rag & Bone. The designer wasn’t able to share how the jacket got to Obama or how they got connected, but said that the brand made it for the former president towards the end of his second term. “I hadn’t forgotten about it, but I wasn’t necessarily waiting [for it to appear],” Wainwright explained. “I wasn’t expecting him to wear it in public. I thought maybe he’s wearing it on the weekends or at home. I was hoping that he was wearing it.”

The jacket is also befitting of a former president: military-inspired and, as Wainwright pointed out, made in America. But it also leans into the freedom Obama, private citizen, has now that he can shop in SoHo instead of wearing whatever is issued to him. “Ours is completely authentic in terms of how it’s put together, but it is a slimmer more modern fit,” said Wainwright.

Despite all the press around his brand at the moment, Wainwright didn’t predict a jump in sales. “It’s not like we’re going to sell a bunch of jackets off the back of it,” he said. “Listen, if I had ‘44’ jackets all over my website I’d probably sell a lot, but it’s a one-off and that’s what’s special about it.” That doesn’t mean the brand won’t shoot its shot: while the jacket wasn’t on Rag & Bone’s site as of this morning, it’s since been added to the selection.

Wainwright acknowledges that the real excitement comes not just from getting clothes on a president, but dressing one who knows how to pull it off. “Making a jacket for the president, that’s fucking awesome,” he said. “How else can you put it? When they look good in it, it’s even more gratifying.”