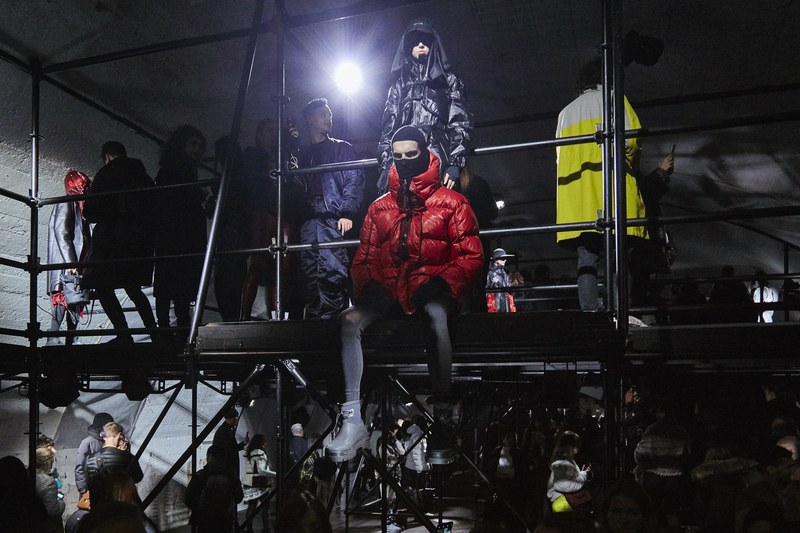 Moncler Genius Is Still Pushing the Limits of the Puffer

At last night’s Moncler Genius bash in Milan, the buzziest designers of the moment unveiled their takes on the classic down jacket.

If there is still cold weather to be insulated from, the next generation of competitive outerwear purchasers could very well remember the late-20-teens as the moment when the down jacket made a play for everyone’s entire closet. And last night in Milan, Moncler laid out the blueprint for how it’s going to go, uh, down with a massive ten-pronged show to unveil the third season of Moncler Genius, the Franco-Italian alpine brand’s innovative collaboration-heavy platform.

Now in its third season, Moncler Genius is ambitious even by the standards of today’s endless parade of partnerships. But the concept remains simple: a group of designers, chosen by Moncler CEO Remo Ruffini, are given free reign in the Moncler design studio to create their own collections. The product is then released in a series of drops, streetwear-style.

It’s no secret that the program is engineered to speak to the young, international, internet-savvy fashion consumer. And nowhere is that clearer than in the new Moncler Genius lineup, which is a murderer’s row of designers, all of whom are setting the agenda for high fashion right now. This season’s new additions are Matthew Williams of 1017 Alyx 9SM and London phenom Richard Quinn; returning are Craig Green, Simone Rocha, Francesco Ragazzi of Palm Angels, Hiroshi Fujiwara of Fragment, Pierpaolo Piccioli of Valentino, as well as Moncler 1952’s Sergio Zambon and Moncler Grenoble’s Sandro Mandrino. And there are no puffer jacket-sized boundaries on what they can create. As Zambon said before the show, luxury activewear is “becoming, in an organic way, our new ready-to-wear.”

The designers most hell-bent on proving that sentiment were Williams and Green, two of fashion and hip-hop’s favorite new designers. Both have a knack for product innovation and a shared fluency in hype, and at the unveiling they explored just how far the horizon of tech-y sportswear extends. Disrupting the runway show is, of course, part of the Moncler Genius mandate, so last night the Milan Fashion Week circus descended upon a network of long-abandoned tunnels abutting the Milano Centrale train station. There was copious prosecco, dalmatians and daschunds in Moncler jackets (part of the brand’s adorable Poldo Dog Couture program), untold numbers of highly chic Italian fashion influencers, and more smoke (via fog machine) than outside Giacomo Bistrot on a Friday night. This was the “Moncler Genius Building,” Moncler’s most visible effort to establish a deeper connection with—and fulfill the multi-faceted fashion needs of—a public that is well familiar with its tri-color-logoed down puffers. As Ruffini put it in an email after the show: “Moncler Genius is conceived as a global statement talking to all customers creating a community that is based on shared values, quick and emotional interactions and unique shopping experience through all touchpoints.” To that end, the Moncler Genius Building will throw open its doors to the public on February 24; the brand expects 10,000 people to attend on the first day.

The main attraction was inside the tunnels, where each designer held their own mini-presentation. A queue formed early to see the newest tenant of the Genius Building. In the stark 1017 Alyx 9SM tunnel, models looked ready to conquer both Berghain and K2 draped themselves on scaffolding. Williams explained that the collaboration helped him execute products he’d long been passionate about but unable to produce, like a seamless baselayer knit made of recycled fishing nets (woven, Williams said, out of several thousand individual netting threads), and a vulcanized foul-weather boot. “I’ve been wanting to make a waterproof vulcanized shoe for a while,” Williams said, “and Moncler was able to connect us with a factory in Italy that could produce it. In terms of production and technology, what Moncler can do has been amazing.”

There was plenty of down, too, which in Williams’ hands was made into oversized parkas and slim-fitting chest harnesses. Williams also developed Moncler’s very first garment-dyed down jacket, accessorized by custom versions of Alyx’s signature buckle clasp. If Williams’s red-hot Nike collaboration is any indication, his Moncler gear will swiftly sell out when it drops starting in August—but the success of the partnership really lies in the fact that it looks like a fantastic Alyx collection recreated out of Moncler nylon and goose feathers. Expect to see some of the tricks Williams has picked up at Moncler to filter back to his white-hot mainline. “This project is really about collaboration,” Williams emphasized.

In Craig Green’s space, which was converted to resemble a wind tunnel, 7-foot-tall down wingsuits were trussed up like kites above the concrete floor. “As garments go, Moncler is the lightest brand you can find,” Green said. “So this season was all about lightness. Every element on the garment down to the zips were chosen solely because of how light it was.” If Williams proved that luxury down jackets can inhabit the aesthetic universe of one of fashion’s most attitudinal brands, Green made the case that the down jacket can, essentially, become anything—and that the material has uses outside of keeping the wearer warm. “I love things that are just whimsical and look like they used to do something but don’t do anything anymore,” Green said. “As people evolve and change there’re so many things that we still have that we really don’t need to function. I guess it’s like having a Jeep in the city when you don’t need four-wheel drive, or having a huge winter Arctic jacket to go down to the shops.”

Moncler Genius is one of Ruffini’s most daring moves since buying Moncler in 2003, when it was a struggling heritage brand nearing bankruptcy. Since then, Ruffini has turned it into a billion-dollar company based by putting everyone in a simple, classic Moncler puffer. Why risk potentially alienating core customers by handing over the keys? According to Ruffini, “To continue to play a leading role in the industry today, means to be as flexible as possible while keeping a strong vision, as well as remaining faithful to the company’s DNA. There is no reason to fight the change: change must be embraced and welcomed. I believe that you must be open to change, even when you are successful, without waiting for problems to come along. It’s key to evolve rather than merely adapt.”

Ruffini’s strategy appears to be working. And besides expanding its customer base, one of Moncler Genius’s brightest ideas might be its influence on the designers themselves, whether that means helping them execute new ideas, develop highly advanced product, or simply see the inner workings of a massively successful luxury brand. “What I find really impressive about Moncler,” Green says, “is that they’re a brand that has huge commercial success and heritage, but they are still taking risks. I guess as a young designer who likes to push things and take risks, it’s kind of comforting to see that it doesn’t stop even when you’re at that level.”