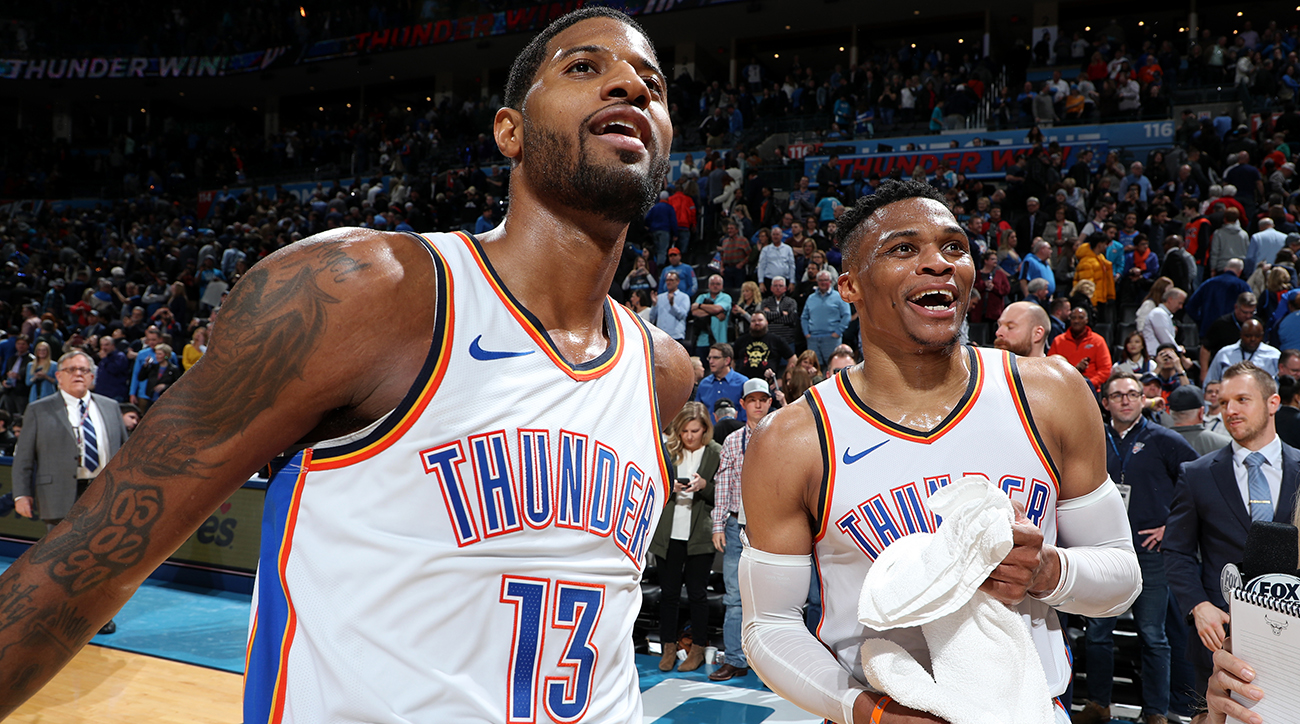 The Western Conference doesn’t hold the same chaos at the top as its Eastern Conference neighbors as we enter the home stretch of the regular season. Golden State is still the odds-on-favorite to represent the West in the Finals, a far cry from the four-team royal rumble unfolding in the East. The lights at Oracle Arena will stay on through early June. We can’t say the same for TD Garden or the Fiserv Forum.

While the Warriors’ death machine has destroyed any debate over the West’s best team, their likely foe in the conference finals remains a question. Will James Harden’s scoring barrage carry a diminished supporting cast in Houston? Can Oklahoma City build a winner around Russell Westbrook’s barrage of bricks? Denver certainly has a case for No. 2 in the West, though it likely takes a back seat to the Rockets and Thunder in the court of public opinion. So with 25 games left in the playoff push, we at The Crossover assessed the state of the West, sorting out each of the three top contenders behind Golden State.

The Case for Second – Houston hit rock bottom with a 107-104 loss to Dallas on Dec. 8, dropping the Rockets to 11–14 after losing just 17 games in the entire 2017-18 season. So how have they played since? Pretty darn well. Houston is 22–10 following the loss to Dallas, good for a 56-win pace. That would tie the Rockets with Denver for the West’s second-best mark over the course of a full season. Their early-season malaise now looks to be a distant memory as Harden guns for a second-straight MVP.

Harden’s sheer brilliance is the likely tiebreaker over Oklahoma City and Denver in a potential West second round. His historic scoring binge has shown no sign of slowing down, and he’s on track for the highest single-season scoring average since Michael Jordan in 1986-87. Harden would be eyeing a second-straight Finals appearance had the Golden State monolith never formed. Don’t expect a non-Warriors team to derail him now.

Blueprint vs. Golden State – Houston held a halftime lead over Golden State in both Game 6 and Game 7 last year despite a middling series from Harden. The Beard shot just 41.5% from the field and 24.4% from three in the 2018 West finals, including a 5-21 performance in Houston’s Game 5 win. Chris Paul was the best player in Game 4 and Game 5 victories, carrying the weight as Houston swarmed Golden State’s attack.

I’m not convinced the same formula will work this year. Houston’s struggles through the first 25 games aren’t completely dismissable, and there are still legitimate concerns that will likely emerge in the postseason. Paul has yet to be completely healthy, with a loss of lift and burst to the tin. He should improve as the postseason approaches, but CP3 isn’t getting any younger. The minutes and injuries are beginning to take a toll. Houston’s wing depth is also diminished, with Trevor Ariza’s departure partly responsible for the Rockets’ drop to No. 25 in defensive rating. Eric Gordon shooting better than 32% from three would help matters.

Harden will have to go nuclear for Houston to pull off the upset. He was solid, albeit unspectacular against Golden State last year. He fell apart against San Antonio the year prior, with Manu Ginobili’s Game 5 block preceding a 2-11 effort in a 39-point loss in Game 6. 2019 could be Harden’s masterpiece, with a historic effort toppling the decade’s best dynasty. It’s hard to envision a different route for Houston to make the Finals.

The Case for Second – Houston has the MVP favorite, yet Oklahoma City is perhaps the most well-rounded team behind Golden State in the West. That’s quite the departure from previous post-Durant seasons. What used to be a cast of underwhelming sidekicks has morphed into a sturdy stable of defenders and versatile wings, working with the Westbrook, Paul George, Steven Adams trio to form the league’s No. 4 defense. Dennis Schroder’s shot has stabilized after he escaped Atlanta. Jerami Grant is now a legitimate playmaker and shooter from the corner. Oklahoma City’s closing quintet is long and athletic, a fully-formed unit without a weak link. No defensive matchup will be hunted. There is no shooter to be ignored.

The improved depth is impactful, yet the Thunder would likely rank below Denver and Utah if not for Paul George’s incredible sophomore season in Oklahoma City. He’s rightfully in the MVP conversation with Harden and Giannis, unleashing a absolutely fantastic two-way campaign. George is up to 28.7 points per game. He’s hitting 40.6% of threes, and launching them well behind the line. He hits contested triples as well as anyone, comfortable rising over smaller defenders even in the tightest of windows. George is now hunting switches aggressively, comfortable morphing into Harden-lite when the situation demands. George’s offensive eruption has allowed Westbrook to evolve as his jumper deteriorates, with career highs in rebounds and assists. Oh, and he’s leading the league in steals, a likely first-team All-Defense member.

Westbrook is currently a Benjamin-Button version of Jason Kidd with regards to his jumper. Formerly a horrendous shooter early in his career, Kidd morphed into a reliable option for the Mavericks and then the Knicks from three, shooting a career-best 42.5% from beyond the arc in 2009-10. Westbrook, meanwhile, exits the All-Star break at 24.9% from three, down from a perfectly-palatable 34.3% in his 2016-17 MVP season. His shooting tailspin may derail the Thunder’s season, though with limited attempts, a reformed Westbrook and an MVP-level George could very well spring Oklahoma City back to the conference finals.

Blueprint vs. Golden State – Oklahoma City is most likely to repeat Houston’s effort in last year’s West Finals to derail the Warriors. The Thunder will rely on their length to hassle Curry and Durant, attacking the offensive boards with abandon. George is playing as well as Durant at the moment. Westbrook has the physicality to bother Curry. A horrendous shooting effort from Draymond Green would help, but with Golden State, the weapons are endless. The emotion of the series could derail Golden State, though the Warriors’ wealth of options makes an Oklahoma City victory a longshot.

The Case for Second – Denver classifies as the West’s version of Toronto in 2018-19. The Nuggets have the best record of any non-Warriors team and rank third in offensive rating. They share the ball with glee, anchoring their offensive around perhaps the best passing center since Bill Walton. Jamal Murray has 50-point potential and isn’t afraid to get under the skin of opposing guards; just ask Kyrie Irving. The bench production from Malik Beasley and Monte Morris has been fantastic. Mike Malone is a Coach of the Year candidate. What’s not to like? As people debate the Rockets and Thunder behind Golden State, the Nuggets are a touch disrespected.

Maybe Denver continues the good vibes and brings a conference finals appearance to the Pepsi Center for the first time since 2009. But I’d caution hopping on the train of a team who’s core has yet to appear in the postseason. The Nuggets have the fourth-hardest strength of schedule ahead. Falling out of the No. 2 seed could be their downfall, forcing Game 1 and Game 2 of a potential second-round matchup away from Denver. The Nuggets are 25–4 at home in 2018-19. Their best chance for a battle with the Warriors lies in a mile-high advantage.

Blueprint vs. Golden State – The case against the Warriors gets considerably tougher after Houston and Oklahoma City. The Nuggets are a middling defense at best. They can’t stifle Golden State’s attack. Nikola Jokic would have to truly channel the spirit of Portland-era Walton to take down the Warriors, though even a near-triple-double average in the Finals couldn’t get LeBron a title in 2015. While we shouldn’t end the dream just yet, a true path to victory is likely to never emerge for one of the season’s best success stories.

The Case for Second – Los Angeles sunk in the standings throughout January and much of February, and the smart money may be on the Kings to snag the West’s No. 8 seed. Yet if the Lakers reach the postseason, counting out LeBron is never a smart bet. The aforementioned teams will be quite concerned if James vaults to the No. 7 seed and avoids the Warriors in round one.

Blueprint vs. Golden State – Can Lonzo Ball become Kyrie Irving? James got swept by Golden State last year. This year’s cast is perhaps a touch more talented, though a sweep would be more likely than Los Angeles winning multiple games. Pulling off an upset over the Warriors would give LeBron another point in the G.O.A.T debate, but that’s presently a storyline pulled from Rich Paul fan-fiction, not reality.

Lakers’ Kyle Kuzma on LeBron, rumors and his NBA doubters