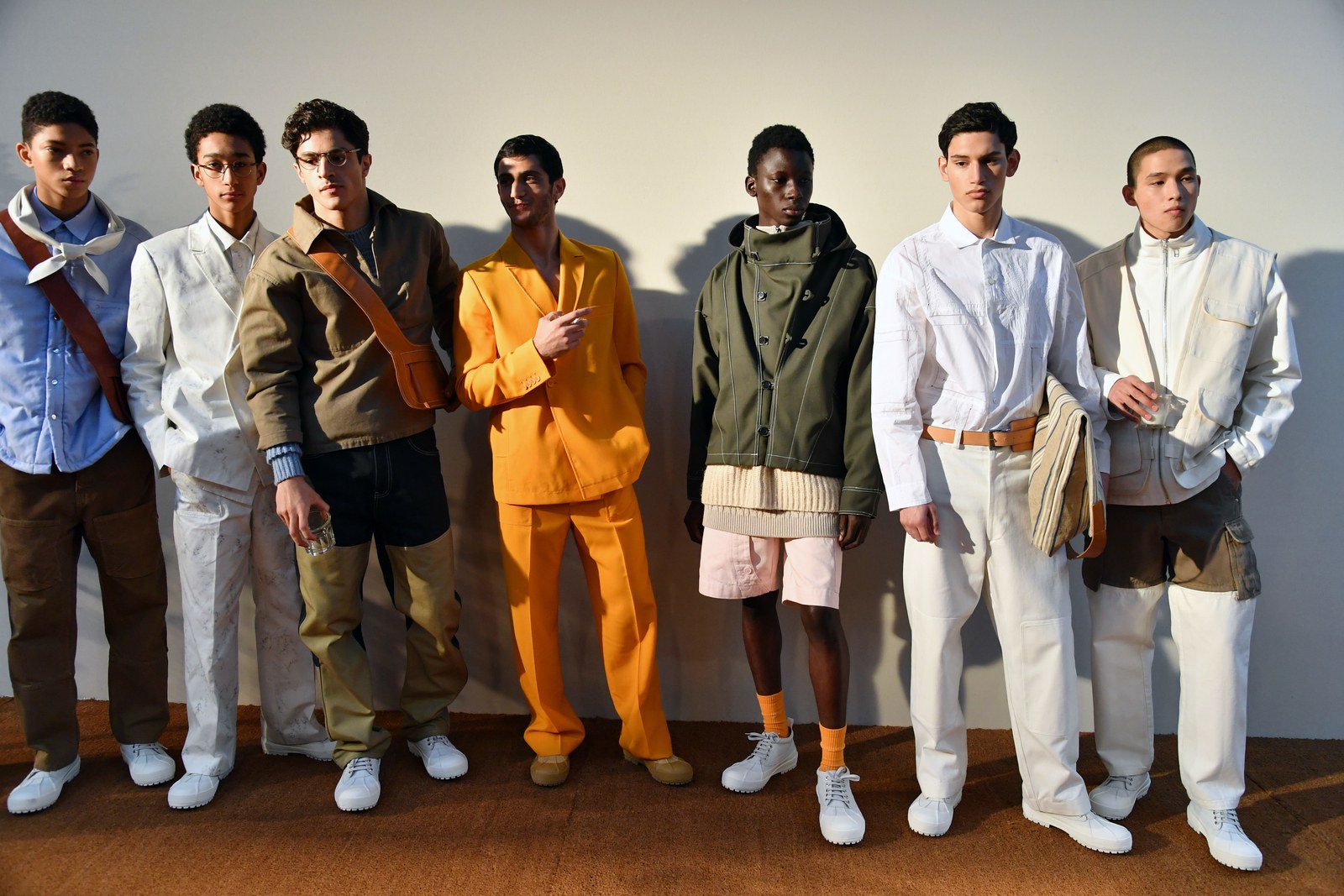 In an interview with WWD on Monday, hunky French designer of tiny bags and billowing sunflower blouses Simon Porte Jacquemus confirmed that business is bon. Sales of his label Jacquemus are expected to hit 23-25 million euros this year, up from 11.5 million euros in 2018 (and 7.5 million euros in 2017). While 30-40% of that revenue comes from his extremely tiny handbags, sales for his menswear label, which he launched last summer, are also strong, he says: “I am happy to get real feedback today in terms of sales and to see men actually wearing the clothes.”

The popularity of Jacquemus’s Fauvist prints, webby knits, and swooshy pants and shorts shouldn’t necessarily come as a surprise. Women worldwide have lived under the tyranny of French women style since Marie Antoinette was eating cupcakes and sculpting her hair into a ship, with near daily diatribes on how French girls dress, date, wear a lot of makeup and yet none at all, don’t get warm, and are, in fact, Italian men. But now, it seems, that mysterious allure has made its way to menswear.

The French Guy arrives just in time to pick up where Scumbros left off—the Scumbro, of course, being last summer’s sloppy, streetwear-obsessed style god, like Pete Davidson, Jonah Hill, and Shia Lebeouf, whose clothing seems to emerge fully formed from the brain of a Sourpatch Kid candy. If the Scumbro was a little messy because he’s so rich, the French Guy is rough around the edges because he’s so cerebral. He is thinking so hard, and his shirt collar is shouldering the burden.

French Guy Style is the Scumbro’s spiffed up course correction. Scumbro style celebrated (however dubiously) men’s desire to splash out on streetwear and reign in aggressive grooming regimens, to embrace their inner teenager’s desire to have a blast looking sloppy. French Guy Style confers a level of respectability that Scumbro style does not—but it’s still louche. Tailored, but not in a menacing way. Indeed, the rules of French Guy Style are being written on the Cannes Red Carpet as we speak: see Valentino creative director Pierpaolo Piccioli in a baggy double-breasted suit, worn with Vans, a gold charm necklace, and a very-unbuttoned shirt. (As Piccioli demonstrates, you don’t even have to be French to get it.)

French Guy Style loves a chestful of weird, dangling necklaces. It loves footwear that isn’t fussy worn with suits (almost always double-breasted–see Ibrahima Traore), or that conjures a costume from the redacted parts of the Bible, like these pervy Jacquemus sandals.

French Guy Style loves drama—as we can see by the Machiavellian collar-flip of Vincent Cassel. He loves a highbrow collab—check out Robert Pattinson in one of the shirts Ray Pettibon designed for Kim Jones at Dior Men’s. Note that both Pattinson and Dafoe look a little exhausted, probably because they have been promoting movies for the past eight days straight–yet it is a wry but somehow refined exhaustion. The French Guy loves a printed shirt—see Miles Teller in this blossoming John Elliott number, with white trousers and scuffed up loafers. Teller also has the most important French Guy signature of all: when in doubt, grow a mustache.

One last crucial element of French Guy Style is a certain amount of chest visibility, a look made most iconic by France’s beloved public intellectual, Bernard-Henri Lévy. Levy (or BHL, as he’s known), invariably appears on television or at panels with his Charvet shirt undone nearly to his navel (allegedly, he has them made without buttons above the belly). It’s sexy to be smart—there’s a suave, academic edge to it, one that asserts the further reaches of left-wing thought are so embedded in your life that they’ve extended into your closet.

It’s not really about showing skin, though, so much as it’s about making people feel a little weird, like you have access to some deeper knowledge (or at least a JSTOR login). Just as the Beatniks wore black turtlenecks and berets to confer intellectual credibility, so Willem Dafoe looks like the thinking guy’s movie star in a mock turtleneck and black trousers (on the beach at Cannes, baby!). There is the underlying suggestion that you might say something a little radical—the Cannes press conference is one of the last public forums for unhinged comments in the era of Cancel Culture, after all. Or maybe your Cannes film speaks for its radical self: Dafoe is there to promote The Lighthouse, in which he and Robert Pattinson star “as masturbating lighthouse keepers,” in the words of New York Magazine. Can a Scumbro do that?