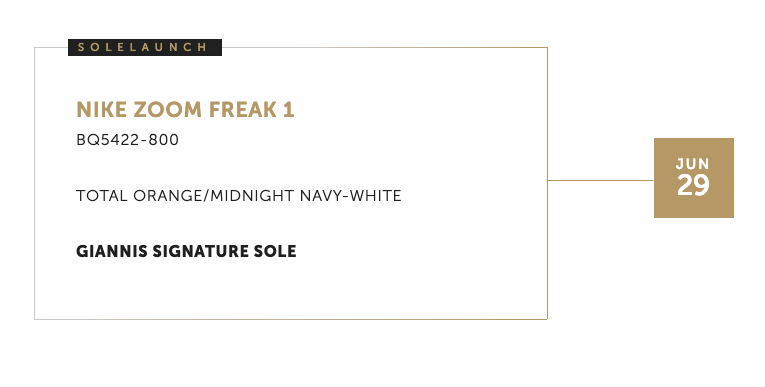 It looks like the Nike Zoom Freak 1 could be coming in June.

Giannis Antetokounmpo was one of the best players in the NBA this season thanks to his monstrous dunks and staunch defense. The Greek Freak is one of the three finalists for the MVP award and he is easily one of the most deserving. In addition to his great play on the court, Giannis is set to receive his very own signature shoe with Nike dubbed the Nike Zoom Freak 1.

So far, there have been leaked images of the shoe including the blue and orange colorway which can be seen below. There has been very little information regarding this shoe and its release date, although now we may have a hint. Solestory, a Swedish retailer, recently added the shoe to its Release Calendar, with a “TOTAL ORANGE/MIDNIGHT NAVY-WHITE” colorway set to drop on June 29th of this year.

The Bucks star has yet to play a game in his new shoe and there hasn’t been much information in terms of pricing on the sneaker. It seems as though Nike is trying to keep everything a secret right now so it’s surprising to see this information come to the surface.

Stay tuned for updates regarding this shoe as we will be sure to bring them to you.

Patrick Beverley Reacts To Being Left Off NBA All-Defensive Teams