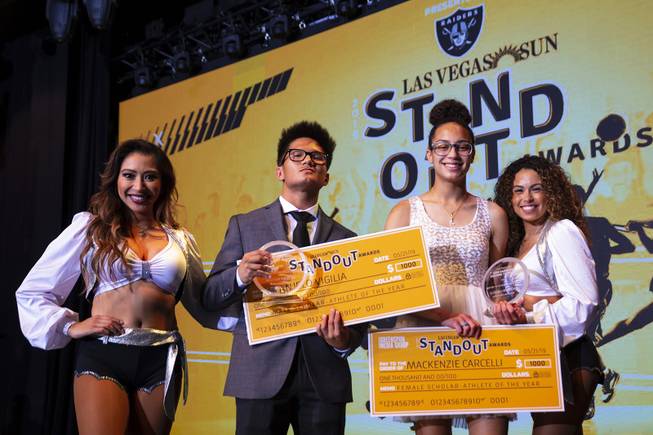 Those descriptions apply to only a portion of the winners at the Sun Standout Awards Tuesday night at the South Point Showroom. The fourth-annual event, presented by the Raiders with a host of other sponsors, attracted all the top performers from the past year in high school athletics.

Roberts, who’s committed to the University of California Berkeley and could be taken early in next month’s Major League Baseball Entry Draft, set a team goal of winning the state championship and an individual goal of breaking the single-season home run record this year.

He wasn’t the only record-breaker recognized. His Female Athlete of the Year counterpart, Clark tennis’ Audrey Boch-Collins, has yet to lose a set throughout her three-year high school career.

“This is a special team amongst a lot of special teams here in Las Vegas,” Bishop Gorman soccer coach Doug Borgel said while accepting the award.

The Gaels were one of two local teams that finished in the top 10 in USA Today’s national rankings in their respective sport with the other being Centennial girls basketball. The Bulldogs were honored as Team of the Year, maintaining a streak where they’ve won at least one trophy in every year of the awards show’s history.

“I’m excited, especially with this being my senior year, we did a lot of things this year,” said Centennial’s Eboni Walker, an Arizona State-bound forward who was also a finalist for Female Athlete of the Year. “There were a lot of changes, a lot differences. We were a team of firsts. I’m excited to be a part of that team and keep on the tradition.”

But the Sun Standout Awards are just as much about the positive forces driving young athletes forward. And few in the valley have driven athletes forward as much Las Vegas High baseball coach Sam Thomas over the last quarter century.

Brian Greenspun, the Sun’s editor, publisher and owner, presented Thomas his award and linked the Sun Standout Awards with the Sun Youth Forum as two ways the publication annually demonstrates a commitment to recognizing excellence among local high schoolers.

“The reason it’s such a good thing, at least to me, is each of these times I show up, I realize why I’m able to do this,” Greenspun said to the crowd. “It’s because of you. It reaffirms what we do is not because of us; it’s because of you guys. It’s about this community.”

Moment of the Year: Richard Curry scores for Bonanza football