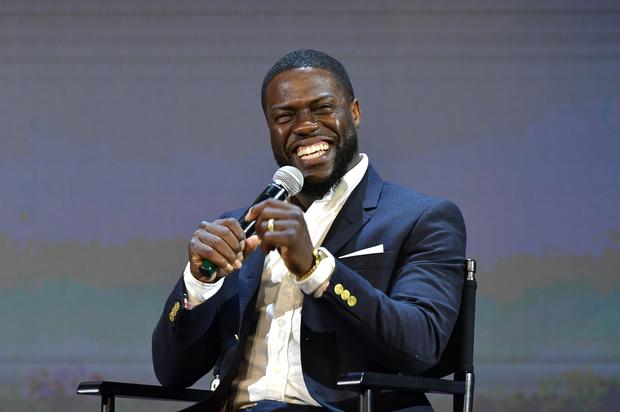 Kevin Hart pays a visit to Jimmy Fallon where he explains a recent photo of him at a wedding that’s gone viral.

Kevin Hart’s Instagram, like most people, is used to flex but the thing about the comedian is, he doesn’t shy away from showing more embarrassing sides to himself. Earlier this week, he shared a hilarious photo of himself falling at a wedding while all of his friends point and laugh at him. “When you get older falling down is the scariest shit ever,” he wrote. “My life flashed B4 my eyes when I went down.”

Jimmy Fallon recently had Kevin Hart on his show where he explained exactly what went down in that photo. The comedian said he was at a close friend’s wedding where he took on the responsibility of taking the reception “to the next level of fun.” He elaborated further that his friend was in a bit of a down mood since he started to rain.

Hart began to hit ’em with the “heel-toe-hop” despite his wife’s warning. “My wife said, ‘Babe, don’t do it.’ I said, ‘You need to back up and stop being the fun police,'” he recalled. However, he learned the hard way that his wife actually had a point.

“I go heel-toe hop, and you could tell I was comfortable because one hand was behind my back. Now normally when I go to hop, I land and I dip. This time I went to hop, whoop, both feet came off the ground,” he said.

Unfortunately, this became a wake-up call for Kevin who, at the moment of falling to the grounds, realized that his friends took pleasure in his embarrassment after they pulled out their phones to capture the moment. Hart ended up blaming “defective” shoes for the fall.

“I want you to show this picture when all my black friends say, ‘Why you don’t hang out with black people no more?'” Hart said. “Cause I’ma tell you what white people would’ve did. They would’ve helped me up.”

Peep the full clip below.