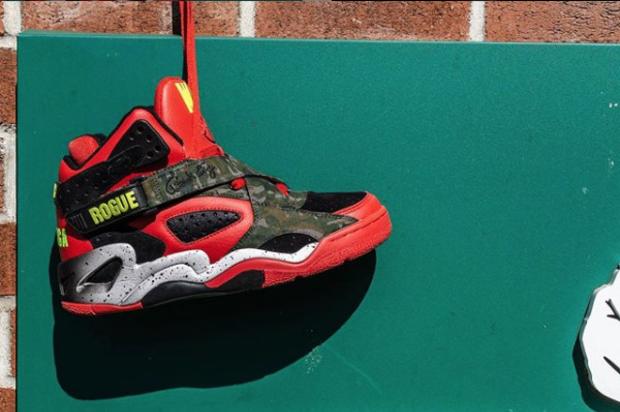 Another look at the upcoming “War Report” Ewing Rogue.

Ewing Athletics has another dope sneaker collaboration in the works, coming on the heels of the “Death Row Records” Ewing 33 Hi and the “Ace Ventura” colorway designed by sneaker customizer, Mache.

For their next project, Ewing Athletics has teamed up with Capone-N-Noreaga for a limited edition Ewing Rogue inspired by the artwork of their 1997 album, “The War Report.”

Ewing Athletics first revealed the CNN collab a few weeks back, but the latest image appears to show that “CAPONE” and “NOREAGA” will be spelled out across the heels in yellow, in place of the traditional EWING text. The black and red sneakers are also equipped with an eye-catching camo print appearing on the crossing straps, as well as portions around the toe and tongue. Additional details include a grey speckled midsole and splashes of yellow on the tongue, heel and velcro strap enclosure.

Release details for the Capone-N-Noreaga x Ewing Rogue “War Report” have not yet been announced, but we assume they’ll be dropping right around June 17 in celebration of the date that album debuted. Stay tuned for more info.