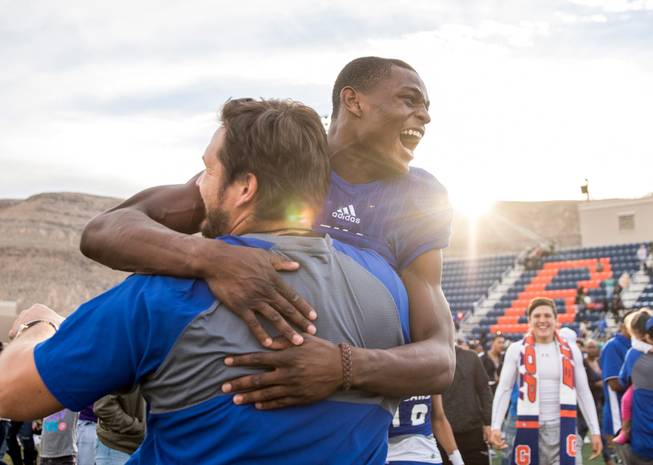 Randal Grimes entered the football game late in the fourth quarter last August for USC in the season opener against UNLV.

The wide receiver, a Las Vegas native, lined up near the Rebels sideline, exchanging smiles and pleasantries with Rebel coach Tony Sanchez and wide receivers coach Cedric Cormier. Sanchez and Cormier nearly persuaded him to stay home in 2017.

“Those guys were happy to see me,” Grimes said. “They represent Vegas. They love Vegas. They knew I was a Vegas kid and wanted to see me do good.”

Grimes, one of the best-put-together players in recent local prep football memory at a muscular 6-foot-4 and 210 pounds, was heavily recruited by UNLV in 2017 out of Desert Pines. But “when you are a young kid and you hear USC, you jump at it,” the former four-star recruit said.

Grimes, though, couldn’t get Sanchez’s vision of “fighting for Las Vegas” out of his memory. Buried in the depth chart of USC after redshirting last season — you can play in four games and still qualify to redshirt — Grimes picked up the phone with hopes of returning home.

He’s known Cormier, one of the nation’s most underrated recruiters, since his freshman year in high school. He’s always appreciated Sanchez’s energy and passion, believing both can get the most out of his skills. Grimes announced his transfer Thursday and will have three years or eligibility remaining.

He expects to be eligible in 2019. He was committed to Minnesota but said he never enrolled.

Grimes has long seen where the UNLV program was heading: new stadium, new training facility and hope for a resurgence. But, of course, he passed on UNLV once and nothing was guaranteed when he asked to come back.

To Sanchez’s credit, he’s never closed the door on local talent, welcoming back running back Biaggio Ali-Walsh from Cal and Keenen King from Washington State to infuse the program with upgraded talent. Just because it doesn’t pan out for some at a Power 5 school doesn’t mean those athletes can no longer play. Grimes had two receptions in two seasons for USC.

“(Cormier) has always wanted the best for me,” he said of the Rebels’ wide receivers coach.

Grimes should fill a void at wide receiver for the Rebels, who lost Brandon Presley to a season-ending knee injury in spring practice and high-profile South Alabama transfer Jordan McCray to Oklahoma State.

“I can’t wait until me and (quarterback) Armani Rogers get going,” Grimes said.