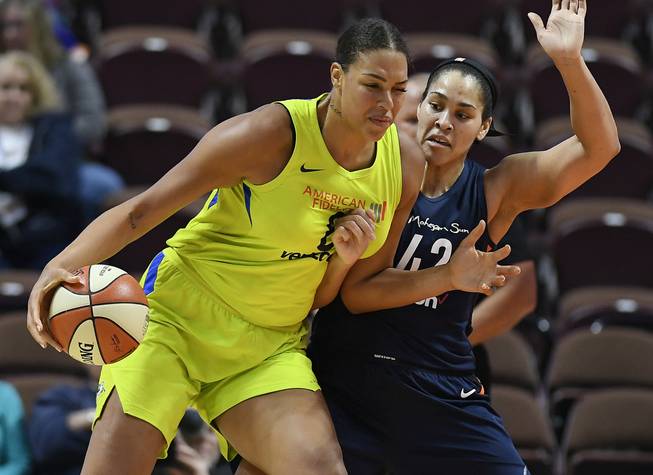 The 6-foot-8 center is not only one of the best and most physically dominant basketball players in the world, she’s also got a big personality. “One of a kind,” is how she describes her mix of charisma, charm and sarcasm.

“I guess if you don’t really know me, people can think I’m standoffish,” she says with a laugh. “But it’s just because I’m shy around people I don’t really know. As soon as I feel comfortable around you, you’ll probably regret getting to know me because I’m very energetic and loud and the center of attention.”

A self-proclaimed partier, Cambage has been famous in her native Australia since she was a teenager. She is outspoken about racial inequality, the gender pay gap and mental health issues. She can set the WNBA scoring record one night (which she did with a 53-point performance against the New York Liberty last July) and get ejected the next (as she did while playing for Australia in the gold medal match of last year’s Commonwealth Games).

Yes, the Cambage experience is a rowdy roller coaster, and the Las Vegas Aces are now along for the ride after acquiring the 2018 MVP runner-up from the Dallas Wings in a trade last week.

It’s a joyride that could very well result in a championship. The Aces were loaded with talent before the trade, and now that they’re adding Cambage to a core that includes All-Stars such as A’ja Wilson and Kayla McBride (as well as this year’s No. 1 overall draft pick, Jackie Young) the team has taken on the look of a burgeoning juggernaut.

Cambage is obviously awesome on the court. Last year, she led the WNBA in scoring (23.0 points per game) and finished second in rebounding (11.9) and fifth in blocks (1.7). She appears to be a natural fit at center next to 6-foot-3 A’ja Wilson, who posted 20.7 points and 8.0 rebounds per game.

The only question is how well the new-look Aces will mesh — on and off the court.

In an era when most teams are trending toward perimeter-oriented offenses, the Aces will feature two of the premier post players in the game. Cambage is fairly certain she and Wilson will have no trouble razing the rest of the league.

“I love to play high-low post game, so I feel we’ll do that really well,” Cambage says. “And we’ve got amazing guards on the wings that are going to take so much pressure off us, so I think it’s going to be very exciting out there.”

Head coach Bill Laimbeer is taking nothing for granted, however. He believes that fit can trump talent, and because of the timing of the trade, Cambage will have had only one week of practice time with Las Vegas before the season tips off on Sunday against the Los Angeles Sparks.

Is that enough time to get Cambage and Wilson on the same page?

“I don’t know,” Laimbeer says. “I guess we’re going to find out. On a piece of paper, you guys would say, ‘Oh this should be great,’ and everyone will say ‘high-low game’ and they work together and you’ve got perimeter shooters. But reality says you have to play the game to really figure out what you have. I don’t know what we have yet.”

And then there’s the other side of the game to consider. Cambage is not a basketball automaton, not by a long shot. She is a thinker who will analyze the situation from all angles. And because of her larger-than-life presence, her teams tend to assume her personality.

If the team wins early and the locker-room vibe is good, the tone will be set for a very entertaining championship run. If things take a while to come together, however, the team’s chemistry will be tested.

Cambage knows that fitting in and working together is a huge component of winning.

“[I’ve been on] lots of teams where there’s been people I didn’t work with and didn’t complement. And those teams haven’t done very well, the teams without chemistry.”

“Everyone is different,” she continues. “I’ve played with girls that have all the talent in the world but no basketball sense. If you don’t have basketball knowledge and you don’t understand the game, it doesn’t translate. It messes up the team’s chemistry. Everyone on this team are very smart basketballers and very talented.”

Cambage is trying her best to get acclimated to her new surroundings. On the eve of her introductory press conference, she spent her first night in Las Vegas walking the grounds at Electric Daisy Carnival and soaking in the neon party atmosphere.

As a DJ on the side — yes, Cambage spins — she was struck by the sheer spectacle of it.

“I headed out to EDC my first night [in Las Vegas] to watch my friends DJ’ing,” she says. “It is the craziest thing I’ve ever seen. I’ve never seen so much electricity in one place. It’s like being thrown into a video game. I’m still trying to get over it. It was very cool.”