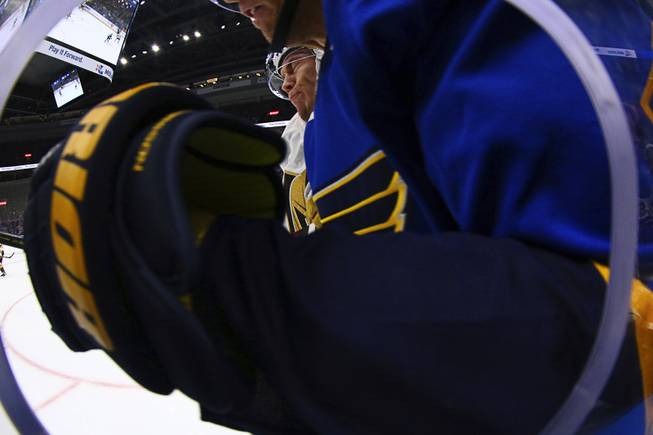 Golden Knights’ Valentin Zykov checks a Blues player into the boards during a game Monday, March 25, 2019, in St. Louis.

If any NHL fan base could have seen this coming, it might have been the local one.

The St. Louis Blues swept the Vegas Golden Knights this season, showing signs of greatness long before they pulled themselves out of the league’s dregs to dance to the Stanley Cup Final. Two of the Blues’ three wins against the Golden Knights came in November, when they were mired in one of their lowest points of the year.

A 4-1 St. Louis win on November 16 at T-Mobile Arena would wind up as coach Mike Yeo’s final victory before he was unceremoniously dumped four days and two losses later. Things didn’t immediately get better under interim coach Craig Berube.

In fact, roughly a month and a half later, St. Louis had the worst record in the NHL. The Blues were almost unanimously a 300-to-1 futures long shot in sports books across Las Vegas.

That has several shops sporting liability if the Blues finish the job and defeat the Boston Bruins in the Stanley Cup Final, which begins with Game 1 at 5 p.m. Monday on NBC. William Hill sports books, for instance, would have to pay out $15,000 on a single $50 ticket alone.

St. Louis getting this far is a great story, the type fans have come to expect from the Stanley Cup Playoffs and one Vegas can relate to after last season’s unforeseen Clarence Campbell Bowl-capturing run in an expansion year. But does that make the Blues a great team?

Some would say they’ve already demonstrated enough to earn the distinction. They were inarguably one of the three best teams in the NHL over the final two months of the regular season, along with the Bruins and Tampa Bay Lightning, as Jordan Binnington emerged as an all-time great rookie goalie.

But they were an afterthought at best for more than half of the year, and though much has changed and that part of the season should be de-emphasized, it still counts for something. And, despite reaching the Stanley Cup Final, St. Louis has looked somewhat ordinary in the postseason.

The Blues slipped past the Jets and Stars in the first two rounds, in six and seven games respectively, but were at a deficit in expected goals in both series. They were at a minus-1 goal differential for the playoffs through three games in the Western Conference Finals before reeling off three straight wins as injuries mounted for the opposing Sharks.

Binnington has tailed off under increased pressure in the playoffs with a .914 save percentage and 2.36 goals against average as opposed to marks of .927 and 1.89 in the regular season.

The anti-Blues arguments may sound harsh, but that’s not how they’re intended. It’s just presenting the pessimistic view to show their greatness is up for debate, which isn’t true of the other side.

The Bruins are decisively a great team. With the same core, they’ve caught fire and climbed to the top of the league at the end of each of the last two regular seasons.

Boston has posted a combined 221 points in the standings in the last two years, which trails only the Tampa Bay Lightning for the most in the NHL. The Bruins had the misfortune of meeting the Lightning in last year’s playoffs but avoided them this year courtesy of the Blue Jackets’ monumental first-round sweep.

Boston handled Columbus relatively easily in six games in the next round as part of a playoff ascent that’s seen the team further improve. While the Blues are now at a plus-9 scoring margin for the playoffs following their three-game outburst against the Sharks, the Bruins are at plus-24.

Their top line has been one of hockey’s best for the past few years and has maintained that efficiency in the playoffs with Patrice Bergeron, Brad Marchand and David Pastrnak having combined for 22 goals. But it’s the power play and goaltending where Boston has really leveled up.

The Bruins rank first of all teams in the postseason by going 17-for-50 on their power-play opportunities. Goalie Tuukka Rask has left behind an up-and-down start to the year with a .942 save percentage and 1.84 gaa in the postseason.

Those are two upticks that are notoriously fickle and can flip as fast as a slapshot from Zdeno Chara in his prime. Regression could be coming for Boston, which has also posted a league-leading and unsustainable 104 PDO in the playoffs.

There are routes to the Bruins losing the series, but they’re at such an advantage that it seems unlikely. It certainly seems less likely than the minus-155 (risking $1.50 to win $1) asking price on Boston available at William Hill and Westgate Las Vegas Superbook.

The odds have stayed deflated because of money coming in on the Blues at plus-135 (risking $1 to win $1.35) including 61 percent of the overall action at William Hill. It’s no surprise the Blues are attracting betting action, as they’ve been a highly profitable team, especially as an underdog, since February.

And, as Tyrion Lannister has already reminded this week, no one can resist a great story — not even gamblers. But narrative shouldn’t trump numbers, and most of the statistical evidence indicates Boston should be a bigger favorite in the Stanley Cup Final.

The Blues have come a long way, just quite not long enough to count on them beating the Bruins.